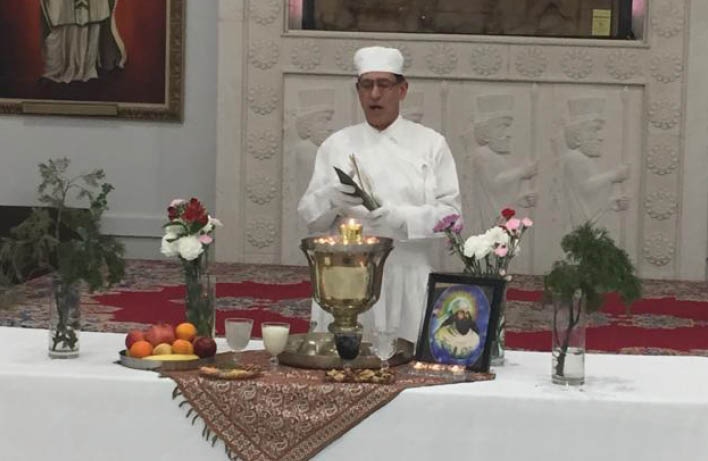 Bahmangan was celebrated at the Mehraban Guiv Darbe Mehr, Toronto, Canada on January 16, 2021. The Festival started with a short introduction, prayers and explanation in Farsi and English by Mobed Er. Dr. Kerman Katrak, who has been performing all religious and cultural events since the last 33 years, in Toronto.

Also the name of a Zoroastrian Archangel called Vohuman (Vohu-Mana in Avesta), Baman is symbolic of the intellectual mind. It refers to the good moral state which empowers one to accomplish his duties. This Archangel also protects the animal kingdom.

In ancient Iran, festivities to celebrate this day took place among common people, royals and noblemen. Recorded by many authors including Biruni, Asadi Tusi and Anwari, according to Biruni, in Khorasan, an assortment of grain and vegetables were cooked and served to all. A common practice involved cooking ‘Ash’ – an Iranian soup-like stew, prepared with available grains and vegetables as thanksgiving to Ahura Mazda.

Respecting Bahman, as the Archangel protecting the animal kingdom, people refrain from consuming meat on this day and celebrate wearing new clothes on this fest. The modern-day Zoroastrian-Iranian festival of Bahman-Rooz continues to be a holy day for Zoroastrians the worldwide.

Bahman Plant: This plant is the same as the equivalent modern Persian term Zardak-e Sahrayi, which blooms in the month of Bahman. It has a red or white root. A medical plant, it is mentioned in medical texts from which it passed into Latin and in the form béhen into French. Two varieties, béhen rouge and béhen blanc, are found and still used in medicine. In some parts of Iran, Bahmangan is celebrated as Fathers’ day, where participants stand side by side, join hands and recite prayers.

Thanks to Farrokh Farahdian, our Darbe Mehr Custodian, Kanoun for bringing all the items required for the ceremony, Pedram Yazdani for his professional technical help and Soheila Shidfar for the set-up of the Bahmangan Table and being the main co-ordinator of the event.

(To watch the video: https://www.youtube.com/watch?v=NkWgW73ZHXc&feature=youtu.be)