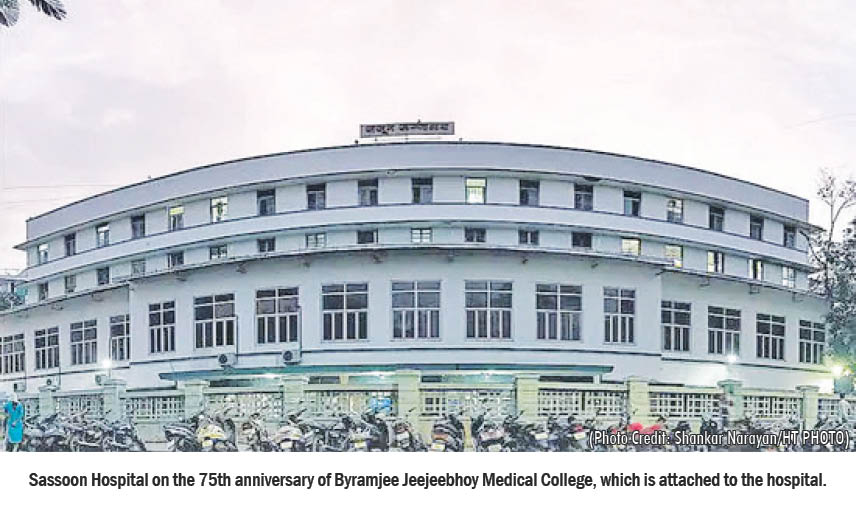 Pune’s famous Byramjee Jeejeebhoy Medical College (BJMC), attached to Sassoon General Hospital, commemorated its 75th Foundation Day on June 23rd, 2021. The hospital has played a crucial role providing tertiary care to residents of Pune and those from state districts. BJMC students are globally recognised for their published papers in international journals and for medical services provided at the Sassoon General Hospital, which has been providing indispensable medical services during the pandemic – being the only government hospital providing tertiary care to Covid-19 patients, even before the Pune Municipal Corp. upgraded its hospitals with ventilators and tertiary care. BJMC and Sassoon also helped fight the 2009 H1N1 (Swine Flu) outbreak in Pune and Maharashtra, as also handled the casualties of German Bakery bomb blast, in February 2010.

Since its establishment, the hospital has been supported by charities and CSR funds from the community and philanthropists. It boasts of some historic moments including the birth of Avtar Meher Baba, born in the old maternity ward; and an emergency appendectomy performed on the Father of the nation – Mahatma Gandhi, in 1924, by British surgeon, Col. Dr. Murdoch and Indian anaesthetist Dr. Datey.

Some of the path-breaking research by the college include work on the role of acetylcholine in sleep by renowned academician and the very first principal of the college – Dr. B B Dikshit; as also Dr. Bhende’s discovery of the Bombay blood group. The hospital found its name in the Jablonski’s Dictionary of syndromes, for the syndrome discovered by Dr. Ganla and Dr. MJ Narsimhan.

Over the last twenty years, BJMC has been sought after by various research institutes including the Department of Science & Technology (DST) and Indian Council of Medical Research (ICMR). It has provided path-breaking studies which have been published in the Lancet, leading to modifications in WHO Guidelines. In 2005, through the National AIDS Control Organisation (NACO), the HIV treatment center (ART) was founded, providing free treatment. Today, over 24,000 HIV infected patients are registered in the ART centre. BJMC is a recognised Government TB treatment centre with 4,000 yearly tuberculosis patients.