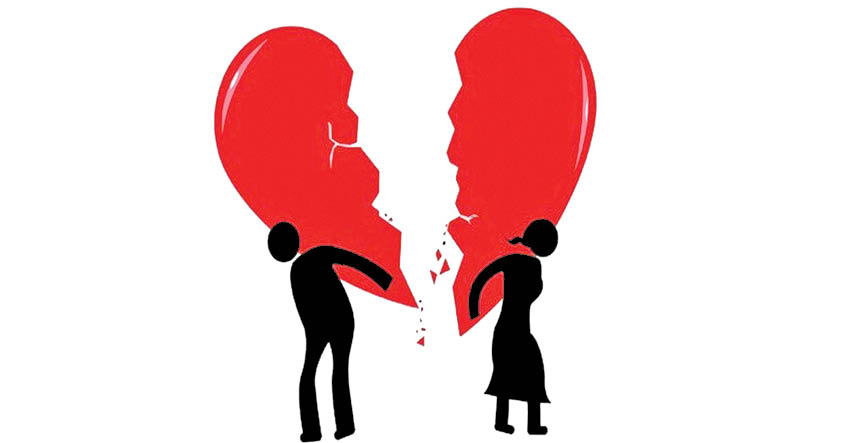 Marriages may be made in heaven, but today, most do not last too long on earth. So, what goes wrong? Why does the wedlock turn into a deadlock? Why does a ‘better-half’ become a ‘bitter-half’? Could it be that when responsibility enters through the door, love flies out the window? Or could it be a clash of personalities? Because ‘Love’ is not as much about gazing into each other’s eyes, as it is about gazing in the same direction.

A friend of mine threatened her parents with suicide if she weren’t allowed to marry the man of her dreams! That her dream-boat was a nightmare from the word go, is another matter. Eleven years and a daughter later, she finally divorced him today, to lead a life of dignity and peace. A friend of mine from our days in Law College, ran away from her conservative Iyengar family to marry her ‘out of caste’ darling. We lost touch as she’d settled in the USA. Last month, I bumped into her at Starbucks, only to know she had divorced her husband as she lived a life of hell in an abusive relationship, being beaten up by him as a way of life! A bad marriage, which contains physical abuse, should be tossed off like a rotten apple. You don’t have to eat the whole apple to realise it was rotten!

Today’s kids are smart. A friend’s daughter told me, “Aunty, marriage is just a piece of paper.” Very true. But how important that piece of paper is! It fits into an accepted social code, but then it’s also a tacit acknowledgement of inconstancy in love, because if love existed in its truest form between two people, any form of formal or legal tie would be needless. But the legal bond is necessarily, both – for their sakes and the sake of children born to them.

Arranged marriages have become obsolete. Today, everyone apparently marries for ‘love’ without knowing its meaning. Love means sacrifice, giving, sublimating your own emotions for the person you marry. Love is the fundamental law of the whole cosmos, for ‘God is Love and Love is God’. The commencement of the Universe and the Solar system is the desire of love to express itself. From desire springs action, and from action, all forms of life. In physics, this natural law is based on ‘Dual-Entity’ – which says that there is ‘nothing single’ in the Universe. The very microbes of disease (or health) go in pairs. Light and darkness, up and down, right and left, the storm and the calm, the male and female… all things are dual. The trouble starts when wrong halves of spirit and matter are bound in marriage.

Another friend shared recently how she made a man chase her for five long years because she was very rich, while he was from middle-class. After those five years, she finally married him “on MY terms” as she put it and boasted how she was the ‘BOSS’ in her house and how she makes her husband dance to her every little whim and fancy. Materially speaking, this looks like a good marriage but if the husband and wife are not spiritually mated, the marriage is useless – in fact, it’s worse than useless. Just as a husband and wife enjoy a physical bond (sex) which gets better over the years, they should also enjoy a mental / intellectual bond which grows over years. If one of the partners is intellectually bankrupt and has no interest in life, what happens to the intellectual needs of the other?

Even more important than physical and intellectual bonding is the ‘spiritual bond’. A couple who prays together, stays together. The harmony and love in such a marriage makes it more valuable than all the wealth in this world. It’s such a beautiful sight to see an old couple supporting each other in climbing the steps of an Agiary or an Atashbehram! Every soul has a soul-mate i.e. the right half of spirit and matter; and their union is as inevitable as that of two electrons which, after spinning in space for certain periods of time, rush together at last and remain so indissolubly united, that nothing can separate them.

In such a union, everything is possible. Beauty, perfection, wisdom, progress, creativeness, thoughts and ideals leading to splendid realisation! Two minds so absolutely in unison, that like a grand chord of music, they vibrate in mental harmony. There is intuitive comprehension of each other’s needs and better fulfilment of each other’s higher natures.

In this day and age, these ideals seem totally outdated. Look at TV serials today – most make a mockery of marriages. Married couples are shown playing ‘musical-beds’ with each other! Holy wedlock becomes an ‘Unholy bedlock’ in today’s marriages! ‘Till death do us part’ is only included for comic relief. To marry or not to marry is a million-dollar question. The grass is always greener on the other side and several unmarried friends envy the married ones and vice-versa. The secret of a happy marriage is not in finding the right partner, but in being one. The aim should be to become each other’s best friends for life, instead of just husband and wife!

In conclusion, it can be said that marriage is a funny institution which means that it is infuriating, varied, wonderful, moving, tender, tiresome, desperately hard work, full of ups and downs, tears and laughter, high highs and low lows, but infinitely worthwhile!