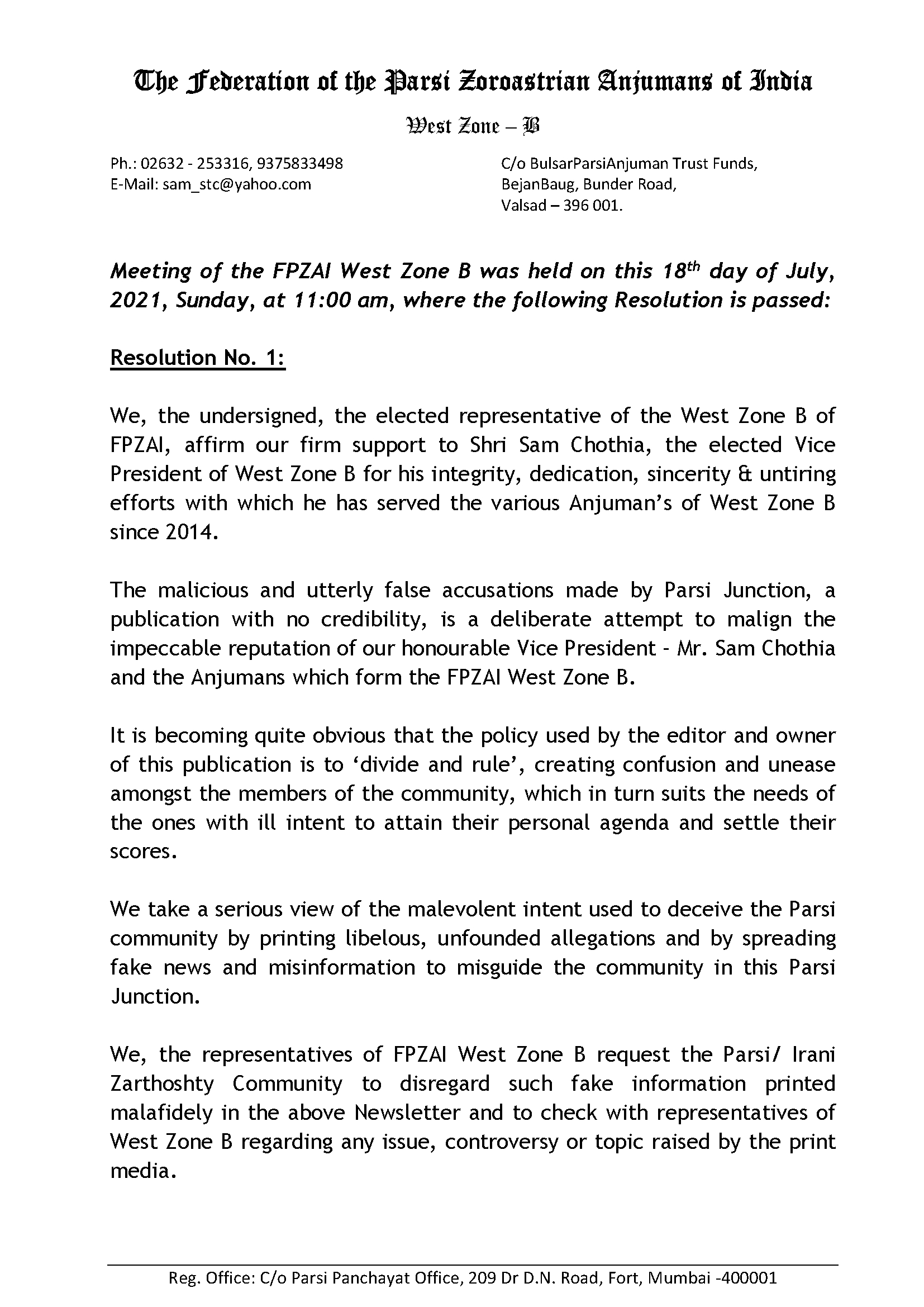 I, Sam Chothia request you to please publish the attached Resolution which was passed unanimously at the Meeting of West Zone B Anjumans (Anjumans of Gujarat) on Sunday, 18th July, 2021. Nineteen Anjumans sent their representatives for this Meeting, including Ahmedabad, Vadodara, Surat. Even the heavy rains did not prevent most from attending. The meeting was presided over by Dasturji Khurshed Dastur.

A little background will explain to the readers of your esteemed paper why this Resolution was tabled and passed unanimously by all the 19 Anjumans present.

I am the CEO of Defunct Anjumans Committee (DAC) which is a Committee which is part of the Federation of Parsi Zoroastrian Anjumans of India (FPZAI); and which is entrusted with safeguarding the properties of Defunct Anjumans all over India. The DAC Committee consists of all the 5 Vice Presidents from the 5 Zones, the BPP Trustees, Sam Chothia, Farrokh Rustomji and Legal consultant Maneck Kalyaniwalla.

Since a long time Dinshaw Mehta has, week after week, been printing defamatory articles in his ‘Parsi Junction’ against me and particularly regarding my work as CEO of DAC. I have been vilified, lied about, allegations, facts have been twisted, screaming headlines accusing me of cheating, lying, working against the interests of our community have appeared in the Parsi Junction. I have given lengthy clarifications a couple of times, which your esteemed paper has kindly published in the interest of transparency and fair play but this attack on me continued in the ‘Parsi Junction’.

This Resolution proves that I enjoy the trust and confidence of the Anjumans and that they are disgusted at the allegations and defamatory articles published week after week against me and my work.

Please publish my letter and the Resolution passed by the Anjumans of West zone B, so that our community realizes that they are being lied to, week after week in the defamatory articles against me in ‘Parsi Junction’.

An Appeal To The Residents Of BPP Colonies

The trustees of Bombay Parsi Punchayet are supposed to be the role models for the community. It is believed that God resides in the hearts of the Panch and prompts them to be righteous, giving fair justice, setting aside their personal rivalries and differences. Sadly, this maxim does not hold true for the BPP – as some of our trustees are constantly involved in a game of majority and minority and decisions are taken by an outside remote control which made the wins of these trustees possible.

The residents of Parsi Colonies have become so used to receiving benefits from the trusts, that it has become a habit with them to get everything for free. For a small dingy kholi (hut) in a jhoparpatti, the poorest pay ten times, or even more rent than what we pay for our spacious flats in prime localities – all thanks to our worthy ancestors.

I do not think that a mere Rs.750/- a month is unaffordable even to a poorest of the poor Parsi families. A monthly rise of just Rs, 750/- is not going to make any dent to an individual, but collectively it creates a sizable amount in several crores for the cash-crunched BPP, and will be used to serve the residents only. Instead of uniform contribution, if the Service Charge henceforth is collected area-wise, there will be greater transparency and higher collection.

Our Punchayet can achieve much more if there is unity and harmony among the trustees. Differences of opinions is a healthy sigh of democracy, but that should not bring ill-feelings and enmity among co-workers. A healthy debate and constant communication can solve difficult problems when workings for a beneficial common cause for the community. Decisions taken unanimously have more weightage and acceptance, than fractured verdicts.

Firstly, the trustees should sit together and chalk out their fixed plans. Next, they should call a meeting of the residents and apprise them of the situation, and request for their cooperation. I believe all will cooperate as no one but they themselves are the sole beneficiaries!

Many community members residing in ownership flats pay steep maintenance charges and those living in rented houses, spend a lot on maintenance of their flats. So then, why should colony residents grudge contributing this small amount? Those who have paid have rightfully fulfilled their duty. Any refund is out of the question, every single tenant is duty bound to pay their dues without being forced or given threats of eviction. Considering the benefits that colony residents receive, I do not think that the poorest among the poor will grudge paying just a nominal amount of Rs, 750/- a month.

It is questionable for the trustees how the richest trust in the city has empty coffers and finds it difficult to pay salaries to their staff! The trustees elected by adult franchise cared not to preserve and protect the funds and properties but spent lavishly on various litigations which not only emptied our coffers and sowed the seeds of conflicts in our peaceful community, but also tarnished the very clean image of our much-respected community.

This great hullaballoo, the misconception and blame game for this negligible contribution is uncalled for. You are the lucky ones in the community to get several benefits the colonies offer and should graciously volunteer to make an annual contribution as Reserve Fund for the repairs and maintenance of the premises you use, and show your gratitude!