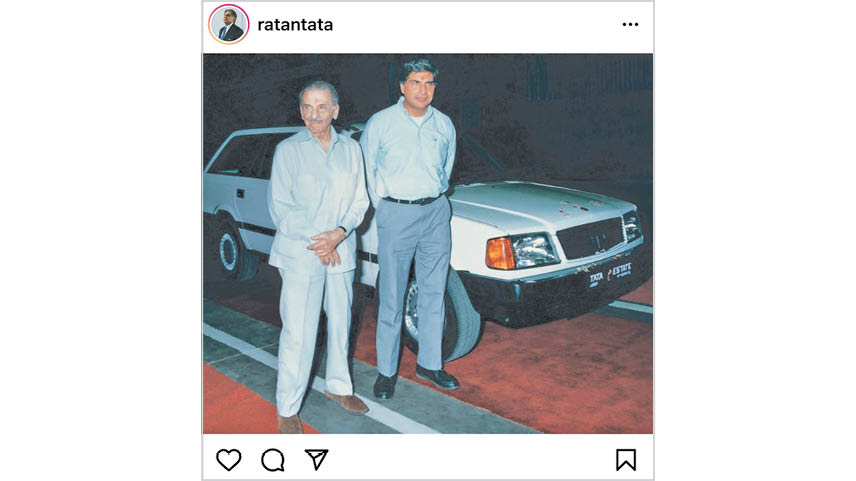 he Chairman emeritus of the Tata group of companies, the iconic Ratan Tata, shared a nostalgic post on his Instagram account, in remembrance of Jehangir Ratanji Dadabhoy Tata (JRD), on his 117th birth anniversary on 29th July, 2021.

His post, which shared a throwback picture of him with JRD Tata, read, “Another reminiscent picture, another memory, on JRD’s 117th birth anniversary. Mr. JRD Tata dreamt of the Tatas producing a “Tata” car. Mr. Sumant Moolgaokar shared in this dream. This picture was taken at the launch celebration of the TATA ESTATE at the Pune plant. One of Jeh’s many dreams became a reality. On that day, TELCO too achieved another dream for India.”

Within just two hours ago, the post had gone wildly viral, garnering over 6.3 lakh likes and counting! Innumerable responses praising the magnificent business tycoons of India were received. In fact, even last year, Ratan Tata had shared a throwback pic of JRD visiting manufacturing facilities for the B1B bomber and the space shuttle.

JRD Tata was born in France. After completing his education in London, he served the French Army for a year. He passion for flying found its initial realisation when he became the first Indian to get a pilot license, in 1929. In 1932, he built Tata Airlines, now known as Air India. As the Chairman of Tata and Sons for 50 years, he led the Tata Group to unparalleled heights of success.

A dynamic businessman and visionary, JRD Tata contributed largely towards the betterment of the society. His vision of India was that of a happy nation, more than a rich one. He was a Trustee of the Dorabji Tata Trust, which established the first cancer hospital in Asia. In 1941, The Tata Memorial Center for Cancer was established under his tutelage.

He was felicitated with the United Nations Populations Award for starting and implementing the family planning movement in India. India honoured him with the Padma Vibhushan as also with the nation’s highest civilian honour – the Bharat Ratna. JRD was also awarded the French Legion of Honor, the highest award for military merits.

JRD and his wife Thelma did not have any children but he passed the reigns of the legendary empire he had created into the capable hands of Ratan Tata. He breathed his last battling a kidney infection, in a hospital in Geneva, Switzerland, on November 29, 1993, at the age of 89. The Indian Parliament was adjourned in mourning – an honor that Non-Member of Parliaments do not receive. He is buried in the iconic Père Lachaise cemetery, put to rest amongst many peers of the Tata family and other luminaries like Jim Morisson, Oscar Wilde and Edith Piaf – fine company indeed for a truly refined individual!