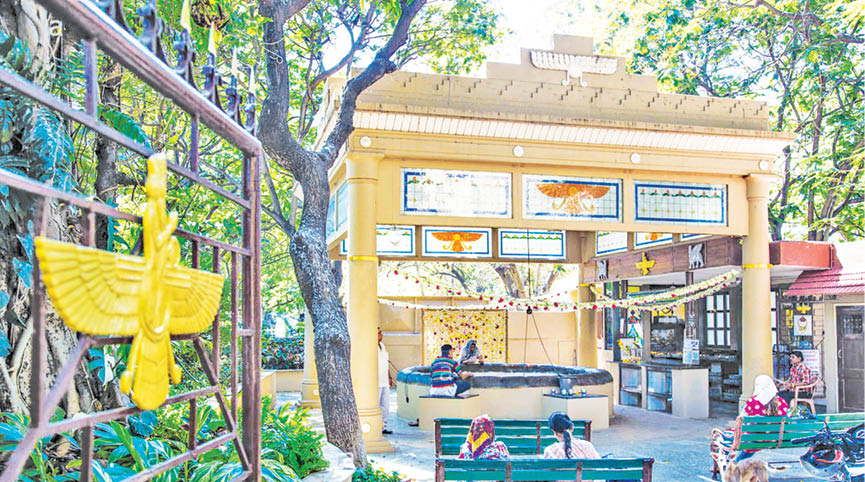 Wells fulfil the need of water for ritual purposes. These are located essentially in compounds of Agiaries, Aatash Behrams and other places where religious rituals are performed. A well must always be open to receive and be purified by the cleansing rays of the sun. This is one of the main reasons why we should not draw water from the well after sunset. Avaan Ardvisur Banoo, the Yazata of water, presides over well water.

Before we perform the Kusti prayer, we need to wash our, open arms, face, neck and exposed parts of the feet with clean free-flowing water (Padyab ritual). It is for this reason that all Zoroastrian religious institutions have one or more wells in their premises. Our quaint and tiny Udvada village boasts of over a thousand wells, many housed in Parsi residences as it was considered highly auspicious to have a well sunk in the memory of a loved one; many wells display a memorial tablet inscribed with the name of the deceased and the day and date when the well was made.

Well water draws strength from the sun in daylight. Wells used for religious purposes should have a small niche in which a castor oil Divo should be placed before sunset in such a way that the rays of the Divo fall on the water below. At night, this lamp serves the purpose of keeping away evil influences from the well water, in the absence of the sun. It also comforts the good forces which stay in and around the vicinity of the well. This is why we light lamps near the wells.

Earlier on, well water was served to lodgers at Dharamshalas/hotels in Udvada and other places in Gujarat. Till the 1970’s, no piped potable drinking water was available in Udvada. The well was the prime source of drinking water in Udvada and most other villages. Hence every Dharamshala and hotel in Udvada had one or more wells. Great care was taken to maintain the religious sanctity and physical purity of wells, in houses and in our Agiaries and Atash Behrams. When a water spring is located and a new well is dug, there is a special ceremony which has to be performed before the water can be used for the Padyab and other religious purposes.

If some sort of naso (dead matter or contagion) accidentally gets into a well, our religion enjoins us to remove it, remove most of the water, clean the well and re-use the same. It is not necessary to shut down the well or stop using it, altogether. The sanctity of the well lies in its miraculously pure and unblemished abundance of blessed waters in our wells!

The miraculous properties of this well are said to grant the wishes of sincere devotees. The well-water is known to have healing properties, expediting recuperation of the ill. The Bhikha Behram well contains sweet water despite being very close to the sea. It is highly unlikely that a well draws water from the same underground source for almost three hundred years – this can also be considered miraculous!

Over the past decade, Humnandagi prayers have been organized on every Avan Roj at the Bhikha Behram well, which is well attended showing the faith and respect that our community has for this place. Unfortunately, due to the pandemic, community attendance is currently not possible.