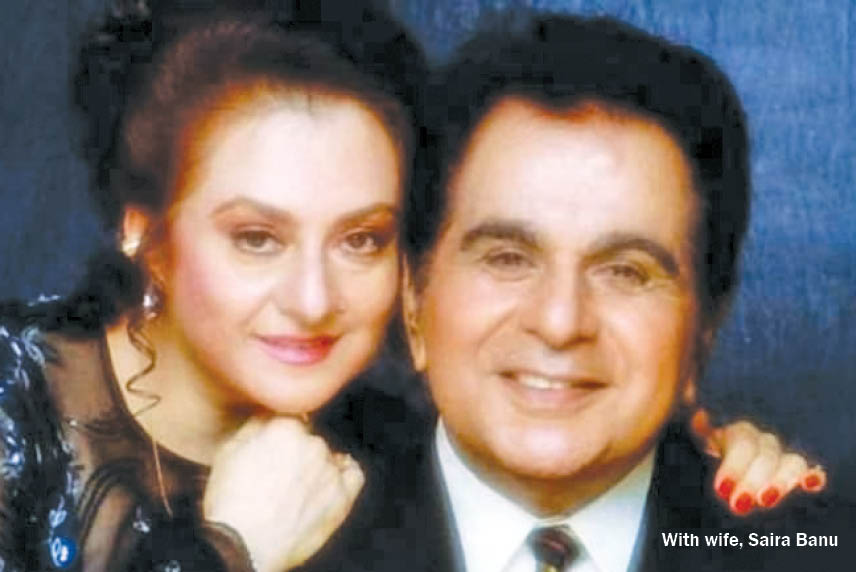 Some alter egos rest lightly beside their host personas. One fell in love with Dilip Kumar (born Yusuf Khan) at first sight. He was, and will always be, the original Khan. All others pale into relative insignificance, whether they have essayed similar roles (read: Devdas) or not. With Raj Kapoor and Dev Anand having already departed, an epochal era and a huge slice of history in the annals of Hindi films have come to an inevitable end. 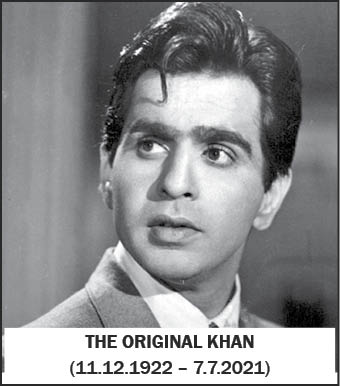 The Original Khan – an Institution and an Era in himself… Whether one writes or reads about him, one mentally struggles to separate Yusuf Khan from Dilip Kumar… the person from the persona. The thespian, however, did not enjoy a smooth beginning to his professional career; the influential Baburao Patel, through his caustic columns in FilmIndia, ensured that.

Watching his films, we experience a wide variety of emotions opening onto the screen… Alongside a dramatic ‘Daag’ in 1952, he also came up with the escapist ‘Aan’. In 1955, a simmering ‘Devdas’ was pitted against the frolicking ‘Azaad’. And in 1958 one saw a historical ‘Yahudi’ run alongside the haunting ‘Madhumati’!

As Kishore Kumar was to Dev Anand, Mukesh was to Raj Kapoor and Rafi was to Dilip Kumar. But few know that initially it was Talat Mahmood (though Mukesh had sung four excellent solos for Dilip in ‘Andaz’ and later in ‘Madhumati’ and ‘Yahudi’) who had mostly sung for him (Daag, Tarana, Aarzoo, Devdas, Footpath). Naushad was majorly instrumental in effecting the switchover to Rafi. During the recording of ‘Mera jeevan saathi’ (Babul), Talat had the impudence to smoke in front of Naushad, who promptly brought Rafi in his subsequent films. 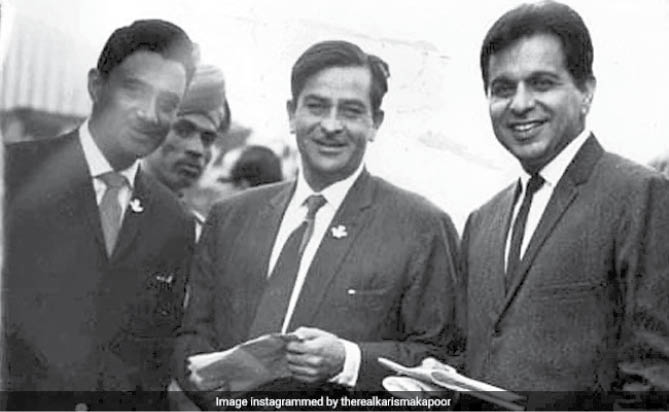 Unknown to most people, ‘aapro’ Dilip Kumar had a strong Parsi connection, and that too in his most renowned film. (Old-time Parsees have always had a fond affinity towards Ashok Kumar, besides the Big Three.) In the mid-40s, noted director K. Asif announced ‘Anarkali’, with Shiraz Ali Hakim as financier and Sapru (as Prince Salim), Chandramohan (Emperor Akbar) and Nargis (Anarkali), among the cast. A slew of factors colluded to stall the epic. Partition caused Hakim to leave for Pakistan, Chandramohan died in 1949 at the young age of 44, Sapru was not much in demand and Nargis, who had a major disagreement with Dilip on the sets of ‘Hulchul’ (1951), swore never to work with him again. But K. Asif didn’t lose hope. His search for a new financier led him to the construction baron, Shapoorji Pallonji, who had come to admire the young Dilip Kumar and who readily agreed to produce the film. Dilip, Prithviraj Kapoor and Madhubala replaced the original trio. 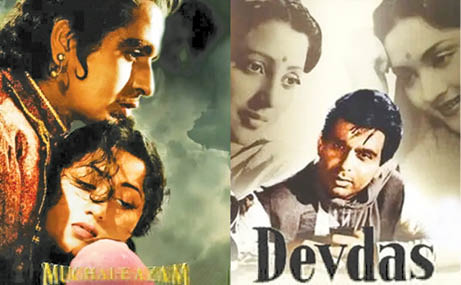 Billed to be the most expensive and lavish film then, now renamed ‘Mughal-e-Azam’, it soon overshot its estimated budget of Rs. 1.5 crores. Rumours of K. Asif taking the Parsi financier for a ride abounded. Unknown to Asif, Shapoorji was advised to hire Sohrab Modi, who had a proven track record of producing and directing historicals. When word reached Dilip Kumar, he rushed to Shapoorji with the plea that Asif be retained at any cost – if need be, he (Dilip) was willing to work without any remuneration. This impressed the producer who produced two blank signed cheque books. “Complete the film at any cost,” Shapoorji said. The charming Dilip Kumar then told Shapoorji that he had a script in mind and wanted to produce a film. He thus used this new-found friendship to get Shapoorji to finance ‘Gunga Jumna’, which was initially banned by the Minister for Information and Broadcasting, Dr. B V Keskar. How Nehru intervened to get the film released is another story.

To celebrate the thespian’s 80th birthday and his 60 years in films, between 2002 and 2004, four biographies on Dilip Kumar surfaced – including one by Bunny Reuben (my favorite) and one by Lord Meghnad Desai, which looked at his films with socio-political overtones.

As author Rohinton Mistry would have said, it was such a long journey… from ‘Jwar Bhata’ in 1944 to ‘Qila’ in 1998 – Dilip Kumar had indeed come a long way. Three double roles (starting with the iconic ‘Ram Aur Shyam’ in 1967) and a triple (‘Bairaag’, 1976) in his 60 odd starring roles is an impressive feat! Another little-known fact is that he has played a Muslim character only once in his entire career, when he comes disguised as Khansaheb in ‘Kohinoor’. His political career included being appointed the Sheriff of Bombay in 1981 and elected unopposed to the Rajya Sabha in 2000.

His sparkling legendary career was embellished with 15 Golden Jubilee hits, 19 Silvers, 9 Filmfare Awards (8 for Best Actor and one for Lifetime Achievement in 1993), a Dadasaheb Phalke Award in 1995 and the Nishan-e-Imtiaz, Pakistan’s highest civilian Award, which courted much controversy back home. But the legend was not new to controversy – in 1983, he had to endure the ire of his fans when it was discovered that he had secretly married Asma. Wife Saira Banu would have none of it. Of course, a divorce with Asma ensued. But his studied dignity in all matters more than made up for all that. His fans quickly forgave him. What added to his dignity was that the stalwart did not indulge in brand endorsements. Just a solitary ad for Mother India pickle, decades ago, comes to mind. The Big Three had that in common. Unlike others, the legend did not endorse colas, creams and cars.

All things considered, Dilip Kumar will always remain a national icon and all analyses of his on-screen histrionics would lead to a single and definite conclusion, viz. he was an actor par excellence. He has left behind many imitators but no successor – just a successful and everlasting legacy firmly implanted on the Hindi screen.