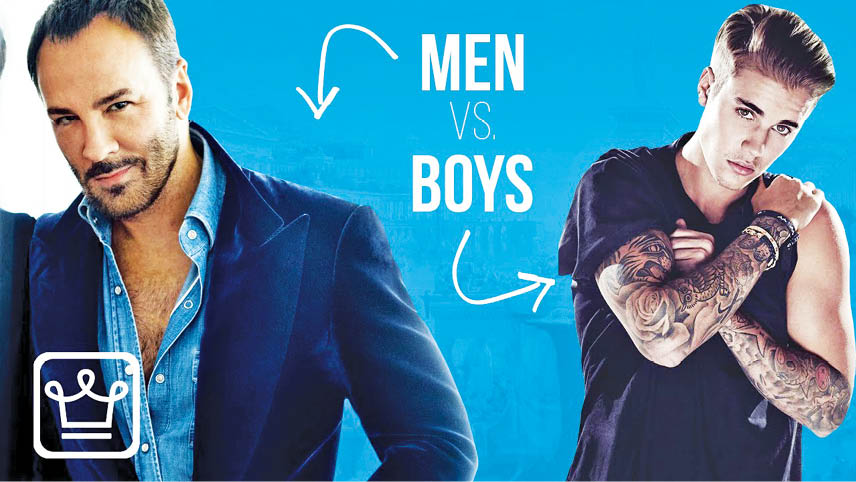 No matter who you choose to marry, partner or single out, there are always early signs that distinguish a man from the boys. Choose well, choose wise, choose someone who exhibits emotional maturity in all aspects of life. Turning eighteen does not necessarily make a boy mature or evolved enough to course the path of life. He may be old enough to buy his drink at the bar, but certain boys never ever grow up!

Navigating the world as a fully grown adult needs more than a beard and a driving license. No matter how swanky your apartment or how terrific your new car, relationships needs a lot more than that. It’s not really about the age, it’s about the mindset – there are ‘18-year-old men’ out there, as there are ‘40-year-old boys’!

Real men earn respect wherever they go. They possess the emotional ability to shoulder responsibilities. A real man never hesitates to whip up a meal for his partner or attend all those parent-teacher meetings, if his wife can’t. Real men take responsibility for their actions, boys make excuses. A real man walks besides you, a boy doesn’t think he should!

A true man believes in equality; showers his woman with respect and admiration. He does not seek opportunities to belittle your efforts. A man wins love, gains trust and secures loyalty without demanding it. If you’ve repeatedly been subject to the comment, “You don’t respect me enough,” walk away. A man who demands respect is a man who hasn’t earned it. A man who perpetually complains about not receiving adequate respect, is probably an insecure individual with underlying issues. In relationships, the give and take should be mutual.

Boys are often on a mission to make others like them, respect them. Rather than genuinely doing things for another, they resort to little acts of manipulation camouflaged as acts of kindness. The intent is not altruism, the agenda is to make the other person like you by being perceived positively. In contrast, real and emotionally mature men command respect naturally. They hold doors for others, smile often and do the small things that create a big impact, without the motive of sociability and credibility. Their daily actions and behaviour are like a default mechanism – it’s simply who they are. Boys pretend, men just do!

Then there’s boys who obsess over their appearance – these need special consideration! If you’re with a guy who prefers looking into the mirror more than looking at you or need to spruce his wardrobe every few months, then my dear, you have landed yourself an incorrigible attention seeker! These boys seek validation in superficial compliments from others; they’re the essential ‘drama kings’! Real men don’t seek acceptance from others – they are self-assured and confident to succeed in all they do, without the need for attention or affirmation.

Have you come across men who constantly pick fights over petty things or bully vulnerable and weak people just because they can? They prefer focusing on the differences in opinions instead of trying to find common ground or agree to disagree with the opposite person. This habit of arguing with people stems from the need to always be right. It is this stubborn trait that separates the boys from the men. Real men have no difficulty conceding defeat, even when they know they are right – they find easier and efficient ways to overcome arguments and find solutions. Real men face problems head on and avoid unnecessary bickering. They earn due respect in the way they handle themselves and the people around them, easing even complicated situations into quick fixes.

Real men make their women feel beautiful. Many men treat their women with indifference, choosing to divert their energies and time elsewhere. Boys go chasing after women. Men choose ‘The One’ and let her know it. Mature men don’t chase women; they focus their energies on supporting her. They have innumerable friendships with the opposite gender but in a relationship, they are whole-heartedly committed to just one.

While boys often make you doubt yourself and your relationship, real men will envelop you in a blanket of security. Boys seek out women for validation, but men seek women to share experiences and the journey of life.  Men hone their minds by acquiring new skills and is committed to his personal development and growth, while boys are entertainment-driven and seldom try to evolve into better versions of themselves.

Boys steer the course of their lives influenced by others, self-reliant men captain their own boat. Men live by a core set of values, beliefs and goals and refuse to either be swayed or bend at the will of others; they don’t succumb to manipulation or force. They seek to become the strongest versions of themselves.

Hence, being a man isn’t determined by age, experience or accomplishments. It’s all about the choices they’ve made – and how they’ve chosen to grow up and evolve into the man they were born to be!

7th August 2021, By Veera Shroff Sanjana, How Separate Men From The Boys, how they’ve chosen to grow up and evolve into the man, Mumbai, Parsi Times, Parsis, Volume 11- Issue 17, Zoroastrian