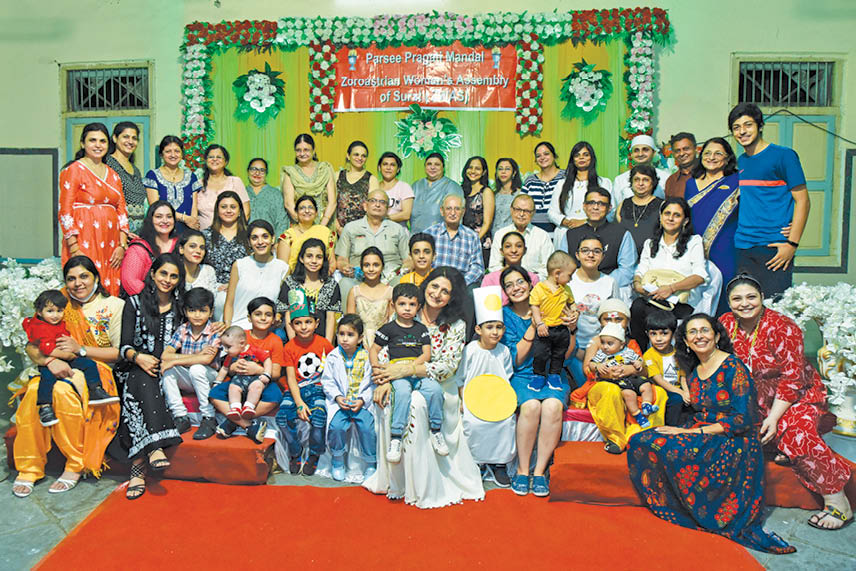 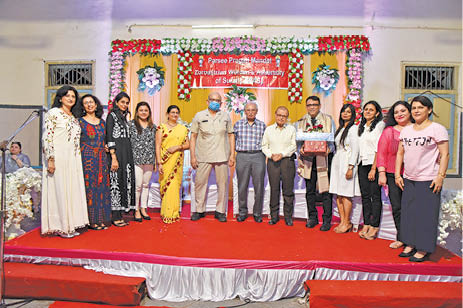 Celebrating the festive and religious spirit during the days of Gatha and Muktad, Zoroastrian Women’s Assembly of Surat (ZWAS) united the Zarthosti community in true entertainment mood in Surat, with five exciting competitions held online and offline, which had almost 70 children participating. On the occasion, ZWAS also honoured and felicitated two prominent personalities on 13th August, 2021 – Dr. Persis Doodhwala, who was honoured by Surat Municipal Corporation for her selfless service during the time of pandemic; and Professor Percy Engineer, who became the Provost of the newly established Sarvajanik University in Surat. The Surat Parsi Panchayat, Kadmi Atashbehram Trust and Parsi Pragati Mandal Surat, joined ZWAS in this felicitation.

An ‘Online Prayer Competition’, held in memory of well-wisher, Late Minoo Gustadji Mehenti, kicked off the celebrations. Judges – Benaiffer Engineer and Maharukh Chichgar reviewed the children also participating from Dubai, Deolali and Dahnu. The winners were Jehaan Ichhaporia (3 to 5 years age category); Zaina Variava (6 – 8 years) and Alaina Irani (9 to 12 years). Next was the ‘Card Making’ Competition, where the children made lovely and innovative greeting cards, competing across 4 age groups. Judge by Farnaz Patel, the winners were Arzan Sabawala (5 to 7 years); Ruhi Dastur (8 to 10 years); Farah Elavia (11 to 14 years) and Firozee Elavia (15 and above). The Essay Competition which was ably judged by Perin Karanjia, who announced the winners – Zaina Variava (8 to 10 years); Delnaz Gandhi (11 to 14 years); Khushnuma Kolah (15 to 18 years); and Farida Patel (19 and above). In a thrilling and fun offline children’s’ Fancy Dress Competition, judges – Er. Dr. Sarosh Dastur and Dilip Ghaswala voted in the winners – Arshaan Variava and Farzan Bhathena (0 to 3 years); Dizan Ambapardiwala (3 to 5years); and Meherzad Shroff (5 to 7 years).

A competition in the memory of Guide and Mentor Dr. Ratan Marshall, in keeping for his love for public speaking was held, under the Dr. Ratan Marshall Elocution Competition. The participants were divided in 4 groups and the winners were Zaina Variava (8 to 10 years); Marzee Kolah (11 to 14 years); Khushnuma Kolah (15 to 18 years); Azmine Gandhi (Above 18 years); and Mahazarin Variava (Extempore). A beautiful contemporary dance was performed by Khushnuma Kolah. Winners were awarded Cash Prizes and every participant received a memento.

‘Educational Scholarships’ were given to the students by Parsi Pragati Mandal, who also honoured Dr. Sarosh Dastur and Dr. Farida Mandviwala for completing their Doctoral studies. The function was chaired by the President and Trustees of The Surat Parsee Panchayat – Jamshed Dotiwala, Yazdi Karanji and Dr. Homi Doodhwala alongside guests of honour – Dr. Persis Doodhwala and Percy Engineer.

Delnaz Katpitia, President, ZWAS welcomed the guests. SSP President, Dotiwala appreciated the efforts of ZWAS and promised eternal support to the Association. He appreciated the Parsee Pragati Mandal for their inspiring work for the community in the field of education and social upliftment. Yazdi Karanjia took note of the efforts taken by Parsee Pragati Mandal and ZWAS in bringing the community together and providing a platform to perform across age groups, and bringing a smile on every face – which also happens to be his philosophy of life – ‘to make people laugh’!

Dr. Persis Doodhwala talked about the role of women in shaping a better society, Women Empowerment and said that Parsi women should be encouraged to go ahead in their respective fields. In his speech, Percy Engineer appreciated Dr. Persis Doodhwala’s selfless work and praised her as a true Corona Warrior. He expressed happiness at the youth taking up architecture and other professional lines rather than staying with the Banking sector. The guests thanked ZWAS, SPP, PPM and The Kadmi Atashbehram Trust for honouring them.

The whole program was ably conducted by Dilnaz Besania, Kainaz Variava and Maharukh Chichgar. Mahtab Bhatporia. President, PPM gave the vote of thanks, expressing gratitude to all dignitaries for their presence as also to the judges and participants for their enthusiasm and the audience for their encouraging presence. The event concluded with a delectable contributory dinner by Nozer and Freny Daruwala (A-1 Food). Kudos to ZWAS for bringing the Surat Zoroastrians together for fun and celebrations!