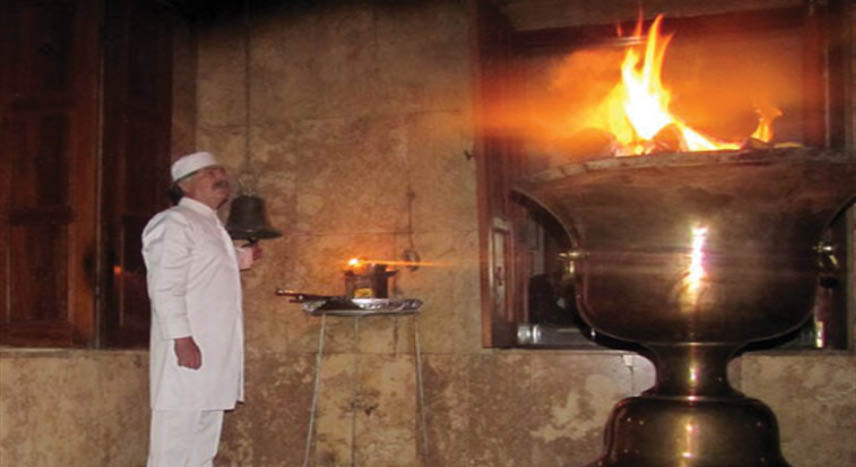 Each day of the Zoroastrian calendar is divided into five time zones, known as ‘Gehs’ or segments dedicated to worshipping and venerating Ahura Mazda and the various celestial divinities. The word ‘Gah’ or ‘Geh’ originates from the Pahlavi language, meaning ‘time, period or place’.  The five ‘Gehs’ in our religion were set, keeping in mind certain fixed points in the 24 hours day – namely sunrise, mid-day, sunset and mid-night. The Boi ritual and Kasti ritual must be periodically performed to feed the fire and the human body, respectively, with spiritual energy, regularly.

The Meaning And Order Of Gehs – Havan, Rapithwan, Uziran, Aiwisruthrem and Ushahin: The names of the five Gehs are originally from the Avesta language. ‘Havan’ means ‘time of pounding Haoma’; ‘Rapithwin’ means ‘half part of the day’; ‘Uziran’ means ‘high part of the day’; ‘Aiwsruthrem’ means ‘singing prayers’; and ‘Ushahin’ means ‘enhancing consciousness.’ The name of the Geh, is not only the name of that part of the day, but also the name of the Yazad who presides over that period – for instance, Haavani Yazad presides over the Haavan Geh.
Each Geh has three other particular Yazads associated with them. Eg., Meher Yazad, Saavanghi Yazad and Visya Yazad are associated with the Havan Geh.

The text of each Geh invokes the four particular Yazads associated with the Geh as well as several other Yazads who are particularly and generally associated with the Geh. From an esoteric point of view, the names of the five Gehs are also the names of the five stages of the progressive evolution of the soul, as follows: 1. Stage of tribulations and temptations; 2. Stage of equilibrium; 3. Stage of triumph over negative (self-realisation); 4. Stage of working and being in total harmony with the divine; and 5. Stage of being divine.

The time divisions are mainly to fulfil the following purposes – To facilitate prayers, perform rituals, regularly recharge our spiritual energies, regularly cleanse from unseen negativities and regularly be in touch with the divine world. It is pertinent to note that each Geh has an average time span of 4 to 5 hours. Ushahin and Havan Gehs are longer to facilitate performance of rituals. In each Geh, the Mobed does the relevant Farazyat Bandagi and then enters the Kebla (sanctum). The regular Boi ritual then involves the recitation of the Atash Nyash for different number of times followed by the Doa Nam Setayashne.

Based on the Gehs, different ceremonies like Navjotes, Jashans, marriages and funerals, are performed at different times. The Havan Geh is the best time to perform most rituals. Yasna (Ijasni) is the only ritual which can be performed only in the Havan geh, except for the Yasna performed once a year for consecrating Rapithwan Yazad (Guj. Rapithwan ijvani) on Ardibehesht Roj of Farvardin Mah. Nuptial ceremonies (lagan na ashirwad) are done during the Aiwisruthrem Geh on account of the promise given to King Jadav Rana that Zoroastrians will have their weddings performed after sunset. Technically, a Zoroastrian wedding ritual could be performed in any other Geh, preferably Havan.

Funerals (Geh-sarnu and Paydast) can be conducted in any of the three day-time Gehs – Havan, Rapithwan or Uziran – because of the religious requirement that the dead body has to be placed in the Dokhma in the presence of the sun and sunlight. Sarosh nu Patru is performed only during the Aiwisruthrem Geh to invoke Sarosh Yazad. This ritual includes the recitation of Sarosh Yasht Vadi, which can be recited only in the Aiwisruthrem Geh.

The set of special Baj rituals called the ‘Chahrom ni Baj’ are performed in the Ushahin Geh just before Chahrum. At the time of Chahrom, the passage of the soul and many other related activities related to the soul take place. These Baj invoke the Yazads (Meher, Rashne, Ashtad, Sarosh and Vayu) and Ardafravash (Asho Farohars) who safeguard the passage of the souls to the other world and their care. They also preside over the judgement of the soul.

Vendidad is performed only in the Ushahin gah, when the negative and evil forces are at their zenith. Nirang-din is an 18 day ritual, the high point of which is the performance of the Vendidad ritual in the Ushahin Geh of the last day.

The time of dawn (Bāmdād/ Hoshbam) is the best time for prayer as it is conducive to a meditative, contemplative and reflective state of mind. Not only is it the calmest part of the day, it is also the time when benevolent, positive forces of nature are strongest. There is very little external disturbance and the currents of spiritual flow are undisturbed. Hence prayers done at this time of the day gives best results.