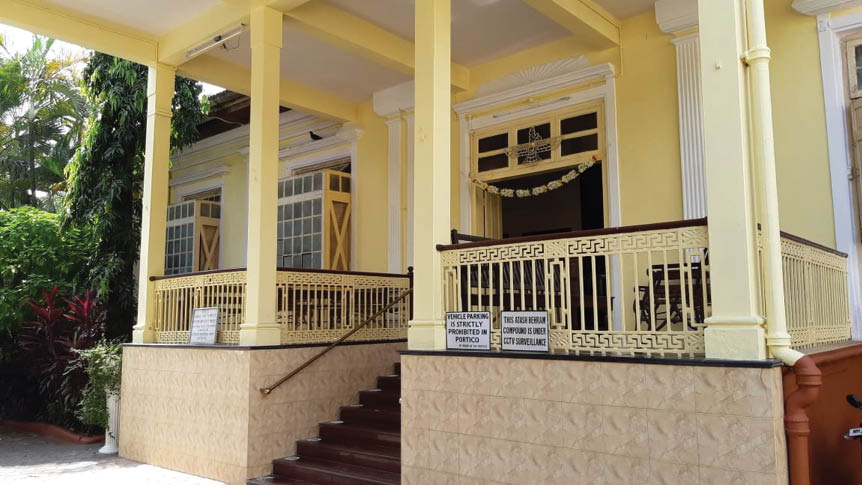 31st October, 2021, (Sarosh Roj, Mah Khordad), marked the glorious 177th Salgreh of the Cawasjee Byramjee Atash Behram, popularly known as Banaji Atashnehram, located at Thakurdwar. The auspicious day began with a Jashan ceremony at the Atashbehram, held at 9:00 am, which was attended by a good number of devotees. A Humbandagi was recited post the Jashan and Chasni was distributed to all. Lovely chowk or Rangoli adorned the entrance of the Atashbehram.

Consecrated on December 13, 1845, Banaji Atashbehram is one of the oldest Atashbehrams in the city and is known to draw in large number of humdins on Mondays for its Humbandagi prayer. It was built by the graces of Framji Cowasji Banaji, a trader, who, despite belonging to a Shahenshahi Parsi family, built a Kadmi Atashbehram – which has all Parsis, irrespective of the sect they belong to, coming here to pray. From Surat, Framji Cowasji Banaji was known for his philanthropy – he also built a pyau (drinking water fountain) at Dhobi Talao; a Dakhma at the Tower of Silence; was the lease-holder of Poway Estate (now Powai); and also built Vikhroli station, in addition to his other charities. His great grandfather built the Banaji Limji Agiary at Fort, and was also the president of the first Parsi Punchayet. Of the eight Atashbehrams in India, four are located in Mumbai, with the Dadiseth Atashbehram at Fanaswadi, being the oldest in the city, consecrated in 1783.