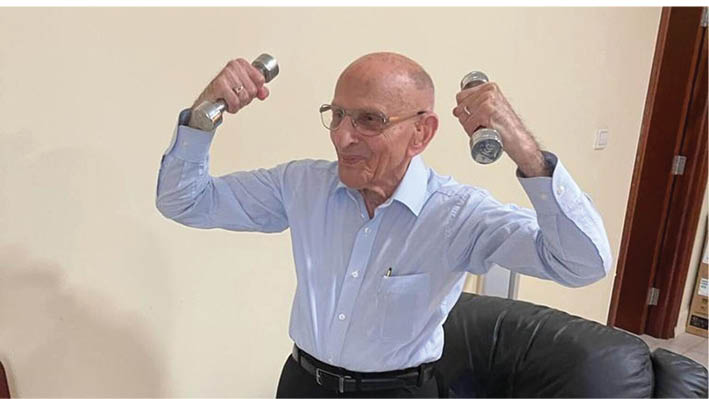 In his centenary year, 99-year-old long-time Dubai resident, Tehemten Homi Dhunjiboy Mehta wowed one and all with his fitness levels, participating in the fifth edition of the annual Dubai Fitness Challenge, which was held on October 29, 2021.

Rejecting the sedentary lifestyle, Tehemten Mehta joined the annual celebration of fitness and wellness by flexing his muscles and pumping iron. “Exercise is a key part of my fitness regimen,” he said, speaking with Khaleej Times, as he held a dumbbell in each hand and performed a quick overhead press, at his Dubai Marina home, before taking the Metro for Expo 2020.

Tehemten turns 100 in May next year. He lives alone in Dubai, preferring not to have any house help. Despite purchasing a home-cleaning robot some time ago, the contraption still lies unpacked. “In hindsight, I realised I don’t need the robot. I can do all my household chores myself,” he reasons.

Born in 1922 in Kenya (still under the then British rule) and of Indian descent, Tehemton attributes his longevity to long walks and not having any kind of vices and excesses. “From the age of 14 to until recently, there has hardly been a day when I have not covered several kilometres by foot. Back in the days, I’d often walk from the World Trade Centre to Jumeirah Creek,” says the die-hard bachelor!

A fractured leg to a nasty fall had put him out of action for several months in 2018, but he endured the pain and got back on his feet, thanks to his sheer grit and indomitable determination. In 2019, he even got his UAE driving licence renewed until October 2023. However, the senior citizen, who last drove in 2004, is in no hurry to hit the roads because he feels cars make people lazy!

“I prefer public transport or walking, at times up to five hours daily,” he shares. Fighting fit for his age, Tehemten Mehta recently travelled by the Dubai Metro with his friend Tina Thapar to visit Expo 2020 Dubai for the second time, since the gala commenced on October 1, 2021. Here he had a gala time himself, joking with people and touring six pavilions for over four hours and yet having energy for more, despite lugging a heavy bag that contained Dh2, 500 worth of honey that he bought from the Oman Pavilion! All of Mehta’s old friends are long gone and Thapar is his main support in Dubai.

Tehemten’s day begins late, as he wakes up at about 1:30pm and then makes tea for himself. “I don’t sleep before 4:00 am. So, the proverb – ‘early to bed, early to rise, makes a person healthy and wise’ – doesn’t work for me,” he jokes. He doesn’t cook and the only meal he has is a light dinner around 9:00 pm, which he either has at a nearby restaurant or picks up a ready-made meal from the supermarket. He spends the night reading or watching TV. “I love WWE (World Wrestling Entertainment) and could spend hours watching it. A lot of people say it’s fake but then what isn’t?” he quips.

He has a younger sister in the United Kingdom (UK), but he dropped plans to relocate there after being mugged in London in broad daylight during a visit, some years ago. He says Dubai is his home and as it’s quite safe too.