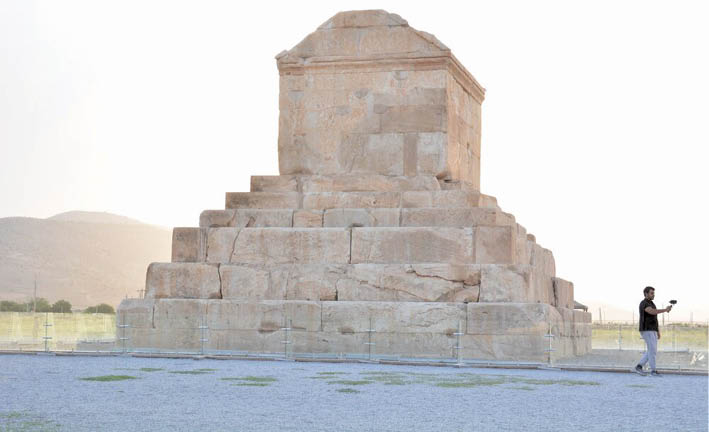 The Iranian government has allocated a sum of 200 billion rials (about USD 4.7 million) to develop tourism infrastructure at the UNESCO-designated Pasargadae, after President Ebrahim Raisi visited the Achaemenid site earlier in October, as per a senior tourism official.

The Pasargadae complex, as a magnificent World Heritage site, has a high tourism potential in the field of cultural and historical tourism, and the plan is to attract more tourists. Situated about 50 km north of Persepolis, Pasargadae was the first dynastic capital of the Achaemenid Empire, founded by Cyrus II the Great, in Pars, the homeland of the Persians, in the 6th century BC. Its palaces, gardens, and the mausoleum of Cyrus are outstanding examples of the first phase of royal Achaemenid art and architecture and exceptional testimonies of Persian civilization.

The UNESCO World Heritage site is also home to a complex water supply system for the time that comprises cisterns, tunnels, underground canals, and ducts, which are locally known as qanats. It is believed that the development of qanats began about 2,500 or 3,000 years ago in Persia (Iran), and the technology spread eastward to Afghanistan and westward to Egypt. Although new qanats are seldom built today, many old qanats are still used in Iran and Afghanistan, chiefly for irrigation.

The 160-ha archaeological site of Pasargadae presents some of the earliest manifestations of Persian art and architecture. It includes, among other monuments, the compact limestone tomb on the Morgab plain that once held Cyrus the Great’s gilded sarcophagus; Tall-e Takht (Solomon’s Throne), a great, fortified platform built on a hill and later incorporated into a sprawling citadel with substantial mud-brick defences; and the royal ensemble, which comprises several palaces, originally located within a garden layout (Four Gardens). Pasargadae became a prototype for the Persian Garden concept of four quadrants’, formally divided by waterways or pathways, its architecture characterized by refined details and slender verticality.

Pasargadae stands as an exceptional witness to the Achaemenid civilization. The vast Achaemenid Empire, which extended from the eastern Mediterranean and Egypt to the Hindus River in India, is considered the first empire to be characterized by a respect for the cultural diversity of its peoples. This respect was reflected in the royal Achaemenid architecture, which became a synthesized representation of the empire’s different cultures. Pasargadae represents the first phase of this development into specifically Persian architecture, which later found its full expression in the city of Persepolis.