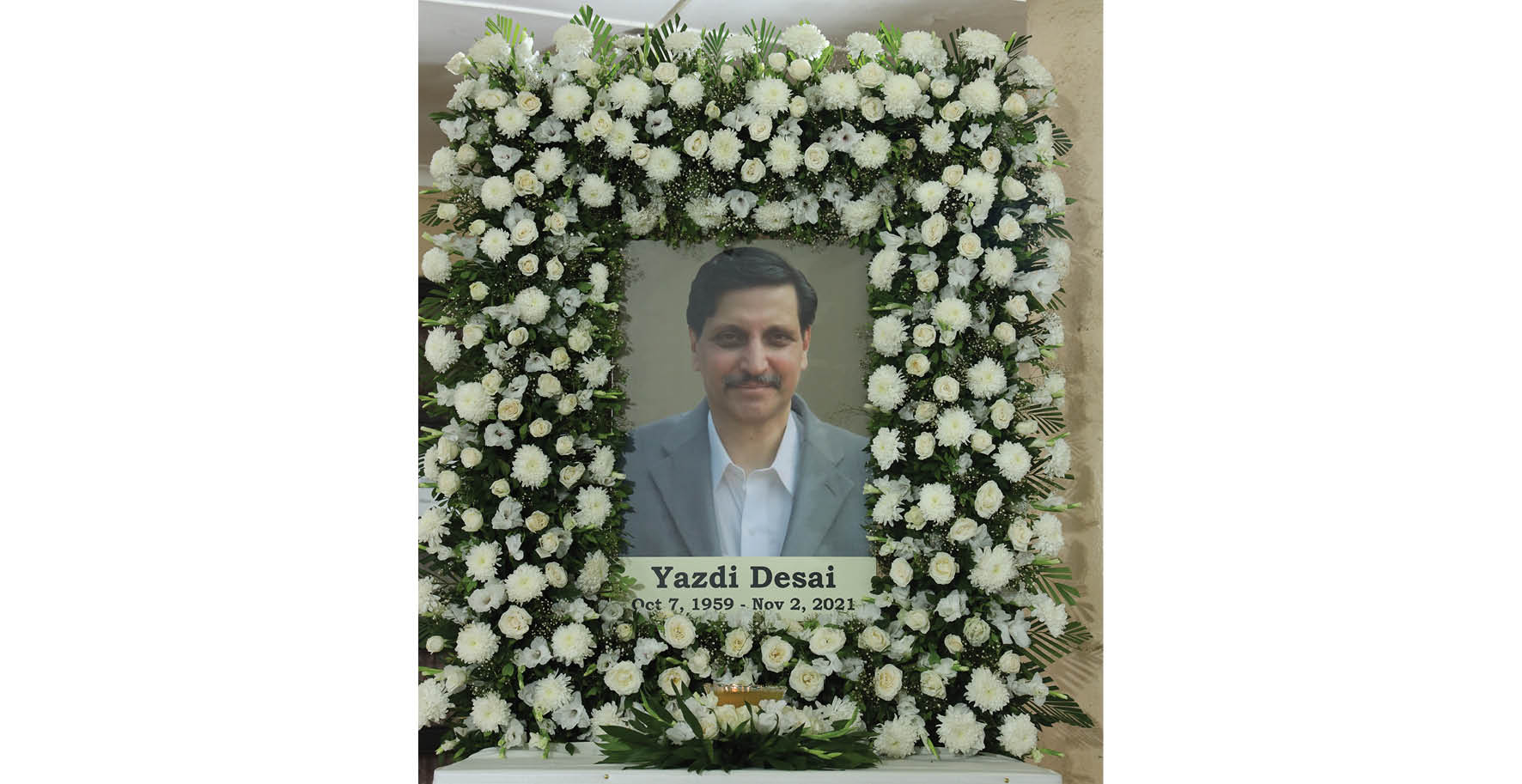 The Condolence Meeting held in honour of Yazdi H. Desai, at Rustom Baug, on December 4, 2021, was attended by over 300 people. It was as ever elegant, classy and graceful as the man himself and epitomized his life and times.

His portrait, framed with flowers, ensured his ethereal presence throughout the evening, as if gazing benevolently at us and reminding us of the life he lived and the service he delivered unto the community. The meeting was ably compered by Spenta Umrigar.

The prayers evoked by Dastur Meherjirana Keki Ravji Saheb set the tone of the evening and blessed all of us, who Yazdi had touched with his enduring smile, patience and courage.

It was significant that Meherjirana saheb and President of FPZAI West Zone B Gujarat – Sam Chothia, spoke in shudh Gujarati for it was in Gujarat (in Ahmedabad and Bardoli) in 2003, that Yazdi’s political career was sanctified and he gained fame in the community by protecting Parsi Irani interests from the incursions of the proposed Cosmopolitan Body.

Dasturji Keki Ravji spoke of Yazdi being a Ratheshtar and of his vision to support small scale entrepreneurs by holding the WAPIZ Cama Baug Sales. He was followed by Sam Chothia, who Yazdi, as trustee and later Chairman of the BPP, gave unstinting support, to save and protect all Defunct Anjuman lands.

The most significant analysis of Yazdi’s political career and role in the community came from Homi Ranina, a former BPP Trustee and WAPIZ Trustee who spoke of Yazdi’s fierce advocacy of the rights of all Parsi and Iranis, his undying zeal to protect and preserve the Dokhmenishini system, his extraordinary love for the community and the endless time he committed to community causes.

Areez Khambatta, Chairman – Rasna Industries and former Chairman of WAPIZ, whose generosity and support made WAPIZ a force to reckon with and whose financial support contributed to Yazdi becoming a Trustee of the BPP, sent a message from the heart. Khambatta praised Yazdi for his strong and fearless leadership and Yazdi’s recognition and role in upholding and protecting the Parsi Irani Zarthushti Identity, for which he is so well known.

Long-time friend, Khojeste Mistree, who shared Yazdi’s commitment and advocacy of various Parsi causes – including saving the vultures, working to get Heritage status for our Atash Bahram and Agiaries and protecting the Towers of Silence – talked of the unconditional support Yazdi gave to community causes and that they shared a common sacred ground with Yazdi’s total devotion to preserving the faith. He spoke of the immense respect and support Yazdi received from the High Priests. He shared how Yazdi saw the humorous side of life and how he sublimated poignant controversies through political cartoons and sketches of his opponents that caught the imagination of the community. He encapsulated Yazdi’s life, speaking how Yazdi believed, that, “to be indifferent in the face of injustice, when it mattered most, was to allow evil to triumph.”

Khojeste also read out a message from Dasturji Firoze M Kotwal who praised Yazdi as a ‘silent giver’ – one who gave generously, especially to mobed sahebs. He praised Yazdi as a person who never shied away from controversies and was at the forefront for defending our religious traditions and causes. He observed that Yazdi gave back to the community many times over, and often without recognition, moving our hearts.

Hanoz Mistry, Company Secretary – Tata Power and Editorial Team – ‘Parsee Voice’ (the traditional voice of the community), spoke of Yazdi’s tremendous support to orthodox causes. He said that over the years, many public meetings held by The Parsee Voice to garner support for various religious issues received invaluable support from the Desais.

A moving message was sent by Karryesh Patel, who along with his wife Sherry, had been very close to Yazdi and Anahita, over the last decade, and especially during his illness, thus witnessing at close quarters, the passion with which Yazdi and Anahita devoted their time and all their waking hours for the community. He gave personal insights into the simple life Yazdi led and his amazing generosity toward any needy person. It was as if Yazdi knew that his time on earth would be short and he made up for it by working for the community with every moment he had. For Yazdi, the community always came first.

WAPIZ Trustee – Meher Panthaki read out a message from Arnavaz Mistry, former co-trustee of the BPP, who grew very fond of Yazdi over the years. She sent her tribute as she was unable to attend the meeting. She recalled that Yazdi was honest to the core and that he treated the poor with utmost respect and dignity. Meher Panthaki then spoke a few words about her personal interaction with Yazdi, sharing how Yazdi’s two most outstanding qualities were his persistence and patience and that memories of him and his work will continue to inspire us.

The most moving tributes came from those who had worked with Yazdi in the Writer Corporation and their description of Yazdi’s work ethics, integrity and sheer determination. Yazdi joined Writer Corporation (formerly known as P N Writer) 36 years ago and it was his first as also his last job. 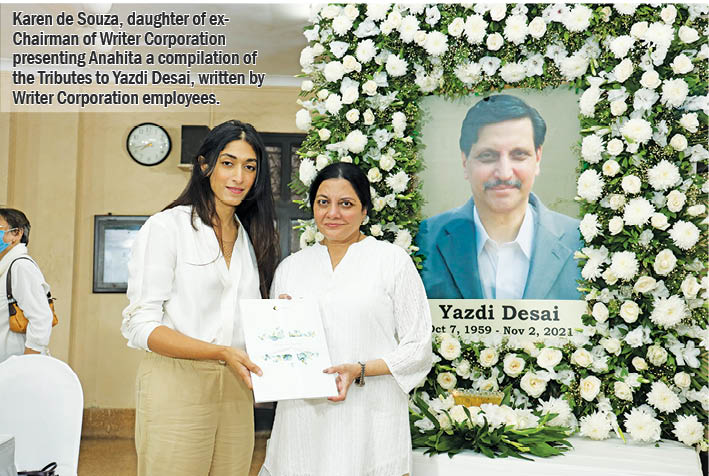 Karen de Souza, daughter of Mr. William de Souza, who along with his brother Denzil De Souza grew the small company – P N Writer, to a huge corporate entity, spoke on behalf of the De Souza family. Karen presented to Anahita a compilation of the Tributes to Yazdi written by people from Writer Corporation. Gracy Lee, the Executive Secretary to the Chairman of Writer Corporation, Mr. Denzil de Souza for 14 years, read a heart-warming message from the Chairman and spoke of her personal interaction with Yazdi.

Alpa Ambavat, who headed the Compliance Internal Audit and Risk Management Department in Writer Corporation, spoke of her experiences with Yazdi as a boss. All of them shared insights into aspects of Yazdi’s life that even those who knew him, were unaware of. His significant role in transforming the Company from a small business into a multi crore enterprise was highlighted by the speakers. The thought that crossed one’s mind was as someone said, “If only Yazdi had been allowed to work for the Bombay Parsi Punchayet without being thwarted from every side in the way he had worked for P N Writer, today the BPP would have been an efficient, financially well-run organization and not what it sadly is today.”

Perhaps the most intimate view on Yazdi came from his beloved wife Anahita. She spoke on how Yazdi proposed to her as a young girl of 21 years and his wisdom of laying importance on compatibility between spouses was an important message for our young people. She thanked everyone for the innumerable messages, condolence letters and emails she had received and she was happy that Yazdi had, “lived a life of purpose and had made a difference to the lives of so many people.”

In Areez Khambatta’s words, “we all have to meet our maker one day and we will be judged not by the length of our lives but by the manner in which we have lived our lives on this earth.”

And for Yazdi it was forever in Service of his Religion, his Community and his People.

May the great God, Ahura Mazda and His Yazatas, Bless Yazdi Hosi Desai’s soul forever, for a life well lived in companionship with Truth, Integrity and Devotion.