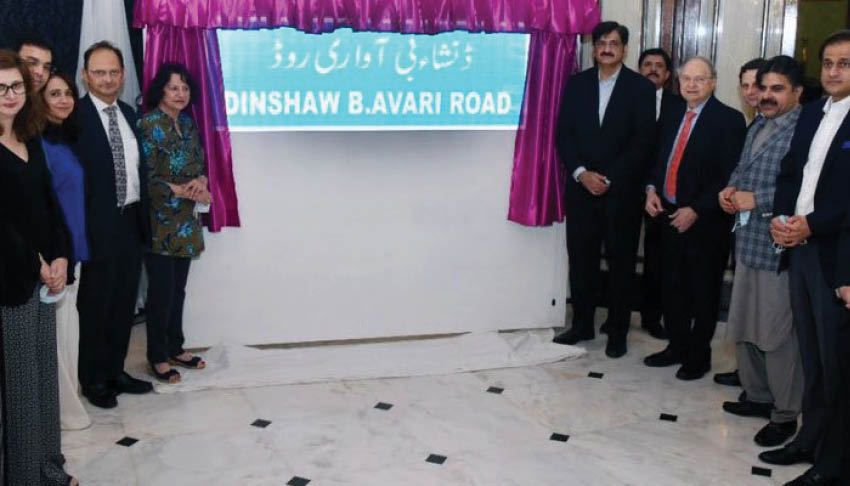 On 4th December, 2021, Karachi-based Parsi resident Bahram Avari, along with Sindh Chief Minister – Syed Murad Ali, inaugurated ‘Dinshaw B. Avari Road’, in Keamari, Karachi, Pakistan. The inauguration ceremony was also attended by the entire Avari family, alongside notable members of the Parsi community and other government officials. The Dinshaw B. Avari road connects the seaport to Karachi, including its Industrial areas and up-country imports and exports, popularly known as the `Gateway to Pakistan.’

CM Ali said that the road had been named in honour of Dinshaw Byramji Avari, for his outstanding service and dedication to the progress of Karachi. Dinshaw Avari was born on 22nd August, 1902, in a humble family and studied in an orphanage as his mother had passed away and his father had to work during the day. He completed his graduation in Commerce (B.Com) by studying under the light of a hurricane lantern. He went on to be hired as a clerk in a Canadian Insurance Company. His hard work and dedication earned him the promotion as a Manager for Karachi and soon he became the General Manager for Sindh, Balochistan, NWFP, Punjab and Afghanistan. Dinshaw later switched his career to become a hotelier.

Decorated by the British Government, Dinshaw Avari was also the founding member of Rotary and trustee of many Parsi Trusts, including Karachi Parsi Anjuman. Apart from being involved in numerous social activities, he was also Trustee of The BVS Boys School; The Mama Parsi Girls School; and The BMH Parsi Hospital. He was the Founder and President of The Deaf and Dumb Center; Founder of Pakistan Sea Scouts; Founding President of Hotels Association of Pakistan; and Member of Society for Prevention of Cruelty to Animals as well as the Sindh Red Cross Red Crescent Society.

As a self-made man, Dinshaw always contributed towards the cause of the lesser privileged and the poor. The CM said that his doors were open to all, 24 hours a day. He expressed hope and happiness that his legacy of social service would be continued by his son – Bahram Avari. Speaking on the occasion, Bahram appreciated the gesture of the Sindh Government in honouring his father by naming an important road after him.

The ‘Dinshaw B. Avari Road’, which spans 2 kms, was earlier in a dilapidated condition, but will now go a long way in easing freight traffic to and from Pakistan.