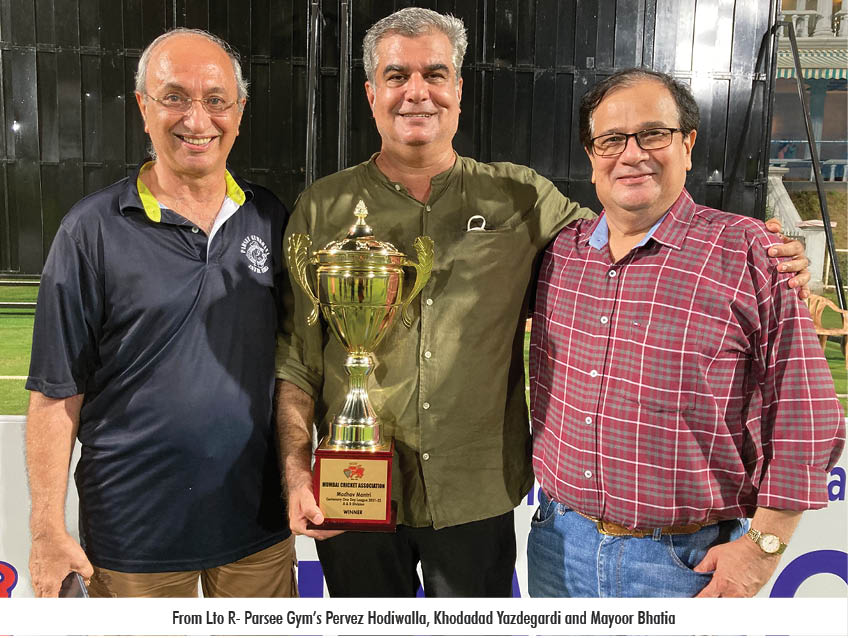 Parsee Gymkhana (PG), the most popular and loved team in Mumbai Cricket, has garnered a massive fan following beyond the city and India… including Austria, England, UAE, Australia, New Zealand and even Russia! PG’s cricketing chronicles continue to win hearts that beat for cricket the world over! This unit is very special indeed as it continues to produce, nurture and groom talent, year after year, through pure cricketing skills. The PG flag continues flying high, doing the community proud, as they continue their winning spree – this time winning the prestigious Madhav Mantri Centenary One Day League 2021-2022. Parsi Times Reporter Binaisha M. Surti brings you all the action of the grand finale which took place at the Mumbai Cricket Association’s Bandra-Kurla Complex ground.

Parsee Gymkhana has repeatedly proven it is a powerhouse in the cricketing arena, clinching yet another title on 24th November 2021 – a massive win by 166 runs overpowering opponents Karnatak Sporting Association in the final of the MCA organized Madhav Mantri Centenary One Day League Tournament at the Mumbai Cricket Association’s BKC ground. This comes on the heels of winning the Padmakar Talim Shield T20 Cricket Tournament, last month.

Late Madhav Mantri was a former Indian cricketer who later played for Bombay – a great opening batsman and wicketkeeper. In his excellent first-class career spanning 25 years, he amassed 2,787 runs. One of the most respected and valued cricketers, his top score was 200 for the then Bombay team V/s Maharashtra, in 1948-49. Born in 1921, this year marks his centenary birth year, hence the occasion was celebrated with this tournament.

In reply, when KSA came into chase down the total, the game came to a halt due to floodlight failure when they were 20-0 in 5 overs at 5:24 pm. The match resumed at 8:15 pm, turning into a one-sided affair as wickets fell at regular intervals. Ankeet Chavan perished on 45, after Shams Mulani hit bulls’ eye with a direct throw at the stumps. The PG bowlers stuck to their line and length, not giving away easy runs. Finally, the Karnatak team made just 137 in 30.2 overs. Shams was the pick of the bowlers with his outstanding (4-23) in 5.2 overs while Tushar Deshpande and Skipper Vikrant Auti snapped up 2 wickets each.

Speaking exclusively to Parsi Times, post another massive championship win, an elated and proud Parsee Gymkhana President – Mehli Golvala shared, “It’s good that sports is playing a key role in helping the world extricate itself from the pandemic. The standard of club cricket in Mumbai is highly competitive. Winning one tournament in a season is always a satisfying and great feeling. In the present season, a 20-over tournament, followed by the 45 over one, just shows the depth and versatility which is highly creditable and moreover, in the absence of our player Surya Kumar Yadav who was away on national duty for India.”

PG’ Cricket Sub-committee member Pervez Hodiwalla shared, “Our PG team has had tremendous success winning two titles. The performance of this particular side has been exemplary and we have great potential to carry on reaching greater heights in the Mumbai cricketing circuit. Hats off and a job well done by Khodadad.” Added Mayoor Bhatia, Honorary Treasurer and Cricket Sub-committee member, “Back-to-back wins for our team in the Talim Shield and Late Madhav Mantri final is the fruit of building a cohesive unit with proper process and work ethics over a period of time and lots of hard work by the coach, players and the team management.”

Captain of PG – Vikrant Auti said, “This is our second championship this season and it feels very special and gratifying to lead such a superb team. The boys showed great character after losing the first game and then coming back strongly to win the tournament. We played as a unit – we are like a family at PG and that crucially contributes to our success. I thank Khodu Sir (Khodadad) and coach Vinayak Mane for their constant efforts and creating that family atmosphere within our team. I hope we continue the winning momentum in future as well.”

Senior pro and PG’s outstanding wicketkeeper-batsman, Aditya Tare said, “PG has shown its dominance in club cricket once again. We have a balanced team and lots of match winners in the squad. We again dominated through the entire tournament and were the deserved champions in the end.” All-rounder and current Mumbai captain for the Vijay Hazare tournament, Shams Mulani said, “During every game, there were players who performed when it mattered, taking the game away from the opposition. This tournament was all about character and great intent. We did that during the final too, winning it comfortably.”

Despite his absence as he’s playing for Team India, PG’s Surya Kumar Yadav said, “Congratulations to the entire PG family. Winning two tournaments in succession speaks loads about our game. The team showed great character. The hard work has paid off. It’s been complete team effort! Focus on the process and results will automatically be taken care of!” PG coach, Vinayak Mane said, “Back-to-back titles is very special for PG. Everyone contributed – the whole squad looks united and are happy for each other’s success. Vikrant Auti captained the side well. We worked through all tough situations – every player put in top effort.”

Khodadad Yazdegardi, Vice President and Cricket Secretary of Parsee Gymkhana; as also MCA Apex Council Member and Team PG’s biggest support system, concluded with, “To win another back-to-back title is great, especially the inaugural Madhav Mantri Tournament. The team’s sheer dominance was heartwarming to see. Every player is standing up and performing when needed. The most beautiful part about this victory is captain Vikrant saying how none of our team boys won any individual award but collectively dominated all through and won by huge margins! That shows our team is well knitted! The coach and support staff is doing a brilliant job, players are executing their roles to perfection. A big thank you to PG President Mehli Golvala who has been very supportive; Co-sponsors – Spenta and NJ wealth for providing us with team clothing and also my Managing Committee and Cricketing Sub-Committee for all their support. I hope and pray we go on to win many more championships this year and make it an even more memorable year!”