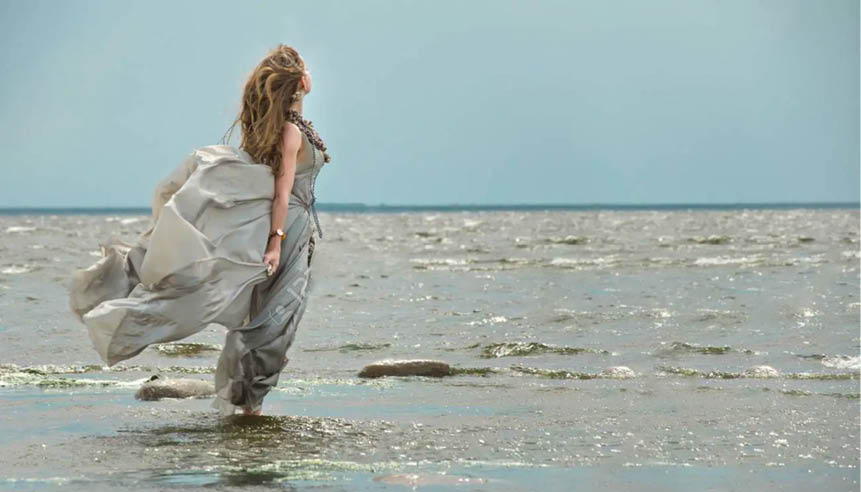 Have you heard the song of the wind? Has it whispered itself to you? Have you heard it tiptoeing all around almost as if hiding itself? Have you heard it whisper those secrets, keeping you up at night, revelling in all the mysteries that swirl below those mists and clouds, wondering what lies beyond… that blanket of night softly lulled by that cradle, swinging under its sway? What is that infinite enigma of that wind song that sings to us every day? …those secrets it holds, unwrapping in layers of whirls dancing on its command?

“Breath it in,” it tells me. “What, I ask, are you offering?” It promptly says, “I give you the soul of the universe, freely, if only you allowed it to flow as such too”. Understanding little, probably nothing of it, I seek to understand this language. Hovering, peering, wondering – do I stand alone? Looking through this window, almost courting a reflection of thought through a transparent haze, like a plane of glass. I suspect it understood my confusion as it softly grazed my cheeks, planting kisses that feel like butterfly wings, almost cajoling this inactive participation in a moment etched in time.

In that blink, between time and thought, my mind stopped long enough just to watch that rustling dance of junipers and firs, all ablaze under its rhythmic sway. I paused knowing they do not question how the world revels to smile every so often at us. How simple it was to watch from the background the sway of trees that stood still a moment ago and then joined the party with the Queen Anne’s lace, her skirts – all a twirl, and their feet matching that pace, step for step, like a great waltz of creation – all indeed a spectacular visual for display!

I stood on the shores, with feet planted on grainy sand, watching the marching of waves, my toes making tiny homes while digging into the sand… sighing with the wind, lifting long strands of my hair, feeling the cool breeze settle on my nape, now bare and exposed, caressed under its murmurings. I gaze long and hard, looking to the horizon. The sky – more open and visible to the beyond than ever I had perceived before, wondering what the morrow may bring. It answers me – this breeze, that haunts all the shores and seas, speaking in a language all its own.

And seeped in antiquity spreading her wings of thought as I stand motionless for a minute, my ears prickling, hoping to pick the sounds of silence but in that moment, the world stands still. The effect – so dramatic that my whole being was quivering with all the knowing. Time and space vanished in a puff of air and all that was left was a vaporising moment of truth where all that you need to know, about the beyond and yonder, was almost tangible and within my grasp. And more than ever, I knew and I could see clearly from before time existed or ever after. In that blink between my mind and time, everything ceased, and all that was left was the wholesomeness of existence, as we are meant to live.

I somehow knew in that moment that the wind had befriended me, urgently imploring me to stay still in that moment of time and thought… knowing somehow it would and could not ever happen again. And as eternity stretched in front of me, my finite soul acknowledged that all things great and small, all creatures and words, thoughts and things thrive under the song of the wind. Under this cloak of life, everything flies by so briefly and within that scope, lies the certainty that all is but part of this greater web. And if only for a moment, within the moment, we would truly understand that ours is but to fulfil a destiny.

A dragonfly whizzed past on wings of humming air; those careless birds flew all around, floating on air spun from cloths of the cosmos, almost ridiculing the heaviness of our weight on solid ground, making me feel so tiny and small, even as they became a part of the greater theme. As I watched their unabashed acrobats, I could almost imagine their floating selves living in the always. Their excitement was plausible at taking flight, while I stood still, dragged by the heavy languor of a weighted soul. Wanting nothing but that inclusion of participation, within and on that very air of merriment, I stood listening.

How defined are moments when small things fall away and a bigger reality flows through! How wondrous are voices carried on the wind of time, seeking an entrance within your realm? I paused at the chanting of the wind as it spoke to me in non-relatable terms of endearment, healing all that angst and agony in a moment of thought and reflection. I grasped it all from the air, getting a good grip on that elusive and slippery truth, madly clutching with dear life, not wanting anything it said to me fading into the dark night of ignorance.

I got a glimpse of eternity from the song of the wind. It spoke and it said, “All here and all there but make little of the water, earth or air; We are nothing but everything and from everything spring’s nothing.” Strange words these – floating all around and soon vanishing into the air and the ground.

It was the song of the wind and it spoke to me!