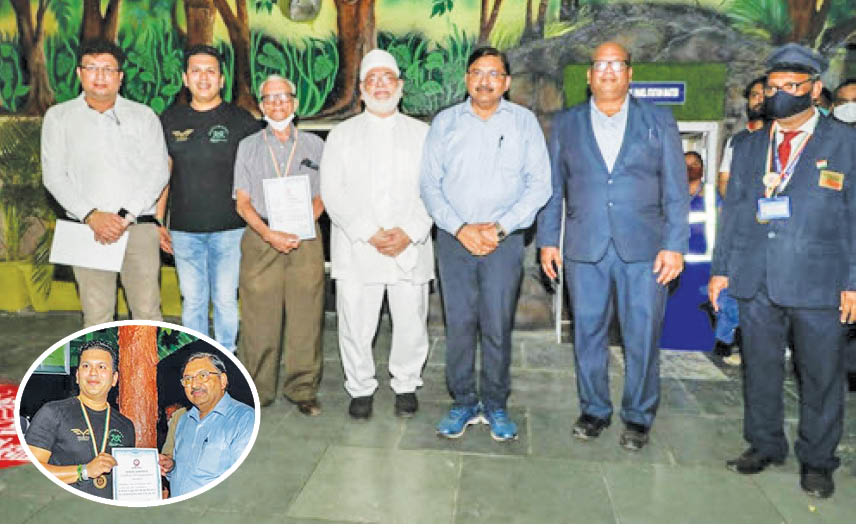 Surat-based entrepreneur, popularly known as the Greenman, Viral Desai, has undertaken the mission to transform and redevelop Udvada Railway station on the theme of climate action and ecosystem restoration. He has completed the first phase of work through his NGO, ‘Hearts at Work Foundation’ by planting more than two and a half thousand trees, alongside the construction of long parapet walls measuring over five hundred meters, for plantation. His environmental venture was inaugurated by Western Railways GM – Alok Kansal and Vada Dasturji of Udvada, Khurshed Dastoor.

A ‘Hut of Gratitude’ thanking the Parsis for their contribution towards India’s progress and upliftment has also been installed. Titled ‘Proud Pillars of Parsi Community’, the biographies of Parsi frontrunners and trailblazers, including greats like Dr. Homi Bhabha, Jamsetji Tata and Dadabhai Naoroji, have been chronicled in this section.

The Udvada railway station master’s office has also been designed on the ‘Alright Green Zone’, with the exteriors focusing on climate action and ecosystem restoration. Udvada has become the first railway station in the country to give a green signal to climate action and eco-restoration, from the country’s first Green Alright Zone of the railways.

Speaking with the media on this occasion, Viral Desai said, “Udvada station will become a model station in the future and be acknowledged internationally as the first station based on the theme of climate action and ecosystem restoration. It will host over ten thousand trees and plants and become the first station of Indian railways to host a Miyawaki forest comprising more than six thousand trees and a museum in honour of Field Marshal Sam Manekshaw. Ecosystem restoration work will be carried out at the station by combining the Indian Army, the environment and the Parsis, which will fulfil Prime Minister Modi’s plans for climate action.” The United Nations Environment forum will also be informed about these projects, where the model of Udvada station will be presented.

Impressed by the work of the first phase of Udvada station as well as his green vision for the future, Viral Desai was felicitated by the GM of Western Railways with a certificate of commendation and a medal by the Indian railways, in the presence of top officials.