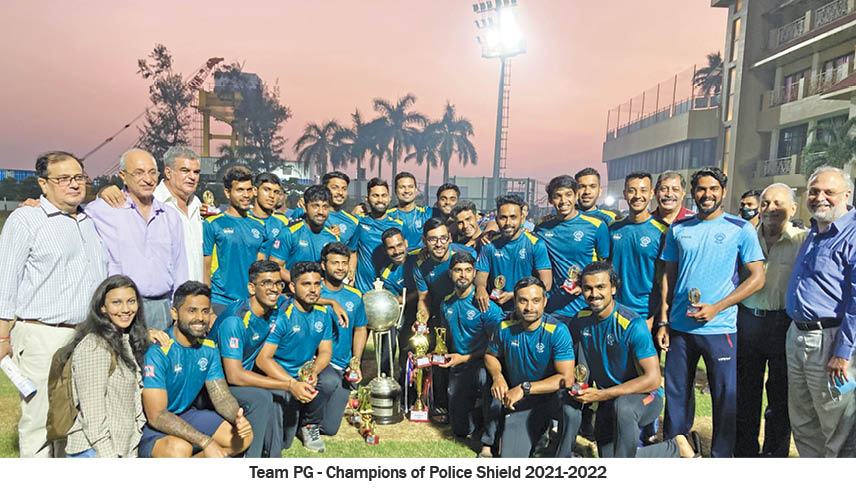 The hearts of cricket enthusiasts and fans in the community and across the world were brimming with pride when Team Parsee Gymkhana (PG) clinched its third championship title, making history with its fearless brand of cricket, by becoming Mumbai’s first club to win three back-to-back tournaments across different formats.

Tracing the victorious journey of Team Parsee Gymkhana being crowned the new champions, it started with beating Bombay Gymkhana in their first 2-day encounter. PG notched up a herculin 427-8 in their 70 overs, bundling out Bombay Gym for 309 in 58.4 overs, winning by 118 runs. PG won its second match versus Sainath Sports Club, chasing down their total of 163 in just 29.3 overs, winning the game by 7 wickets. In the third contest at the Wankhede Stadium in Mumbai, PG won by 130 runs against Shivaji Park Gymkhana (SPG). During their semis, PG played MIG Cricket Club. Batting first, PG scored 365 in 69.5 and bowled out MIG for 128 in 42.4 overs – thus entering the finals in style! 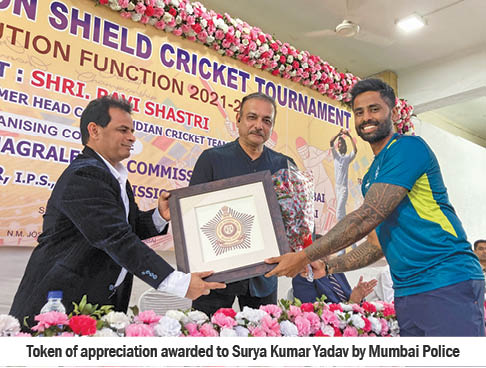 The post-match presentation ceremony was graced by Chief Guest – former India cricketer, captain, head coach and guide of Team India – Ravi Shastri; and Chief Patron – Mumbai’s Commissioner of Police – Hemant Nagrale. Speaking on the occasion, Ravi Shastri congratulated both teams. He said he felt overwhelmed watching the match at the Police Gymkhana as these were the actual grounds where cricketers are born. He wished the tournament would carry on for a long time. He said he always kept a keen eye on Mumbai cricket.

Speaking exclusively to Parsi Times, after their third consecutive victory, an overjoyed and proud PG President, Mehli Golvala shared, “Congratulations to the entire cricket team on another championship title and hats off to Cricket Secretary, Khodadad, once again for all that he does to bring out the best in the boys. The team performed well all season, even without key members who were away due to other commitments. Surya Kumar Yadav was outstanding in the final, portraying batsmanship of highest caliber!”

PG Captain and Best Fielder of the Finals, Vikrant Auti, shared, “We are now at the top, winning all three formats of the game convincingly. One of the most important reasons to win titles is the family atmosphere on this side. Every individual is important, even if they aren’t in the playing X1. Special thanks to Khodu Sir, Vinayak Mane and everyone at PG for their constant backing and efforts.”

The Best Batter of the Match, Surya Kumar Yadav said, “It’s a massive achievement for PG, shows the team has come a long way. A lot goes into making a winning-team… the entire PG management, Khodu Sir, support staff and coach have put in the hard yards behind the scenes. They deserve loads of credit along with the team. I always love returning to and playing for PG as this place is home for me. I went out and batted just the way I always do, expressed myself like the way I play for India and Mumbai. I hope we carry on with this winning momentum, always maintaining the same friendships and bond along the way.” He was presented a token of love and appreciation from the Mumbai Police.

Renowned PG Coach, Vinayak Mane shared, “We have quality players who always stay in touch even when they’re away playing for India/Mumbai, as they share a strong sense of belonging. Everyone celebrates each other’s success. Special mention to Khodadad and his team who have performed phenomenally!”

Man of the Tournament – Nikhil Patil Jr. said, “We gelled well as a team from the start of the season. Remaining calm and collective while executing our plan is what bailed us out when we faced toughed situations.” While Best Bowler of the Tournament, Siddharth Raut, stated, “It’s been a privilege to play for PG and win titles… Superior commitment has been shown by each member,” Emerging Player and Best Batter of the Tournament, Sachin Yadav said, “There was grit and determination shown by the players – we strive to get better as individuals, and thus move to the next level.” Senior pro, wicketkeeper-batsman Aditya Tare added, “It is a phenomenal achievement for PG, it shows how well we have gelled as a unit, played top brand of cricket, excelled and dominated through the tournaments. This PG unit actually feels like a ‘first-class’ team, the way we play, practice and prepare.” 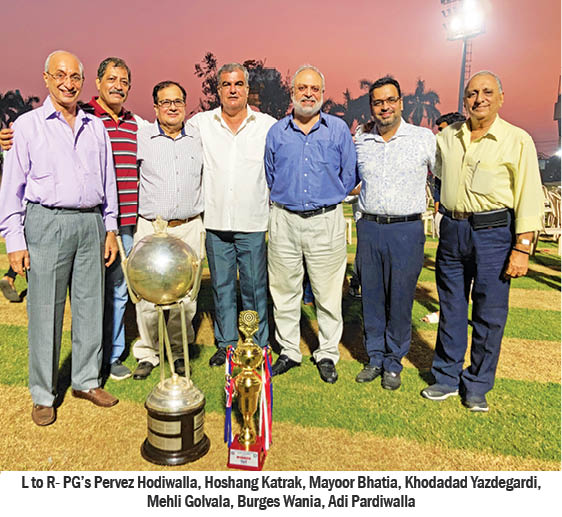 Khodadad Yazdegardi, Vice President and Cricket Secretary of Parsee Gymkhana; as also MCA Apex Council Member and the pillar of Team PG shared, “The first time we defended the Talim Shield title, I shared that winning is great, but defending the title is absolutely brilliant. We moved ahead to the 45 overs Madhav Mantri Tournament, becoming champions once again – that was the icing on the cake… proving this team is not just good in T20, but also the 45-over 1-Day format too. But winning the Police Shield after 1956 was very nostalgic.  On the eve of the win, I was speaking to Farokh Engineer and Hoshang Dadachanji, (both team members of the 1956 win). They were very excited, hoping the team wins again. No words can express this feeling of winning the Police Shield.

I thank PG President – Mehli Golvala, whole Managing Committee and my Cricketing Sub-committee members for their constant support, and our sponsors, Spenta – Aspan Cooper and his son Farshid, and NJ Wealth who sponsored the team alongside Spenta. Credit to the hard work from coach- Vinayak Mane, physiotherapist- Dr. Saloni Modh, trainer- Saurabh Jagtap and the entire team. Seeing Surya and others turn up for the game and getting us past the winning line will be remembered for many years to come. For the first time in the history of MCA local cricket has a team won three back-to-back tournaments in one particular season! This proves the standing prowess of Parsee Gymkhana today in local cricket,” concluded the proud man-of-the-hour – Khodadad.