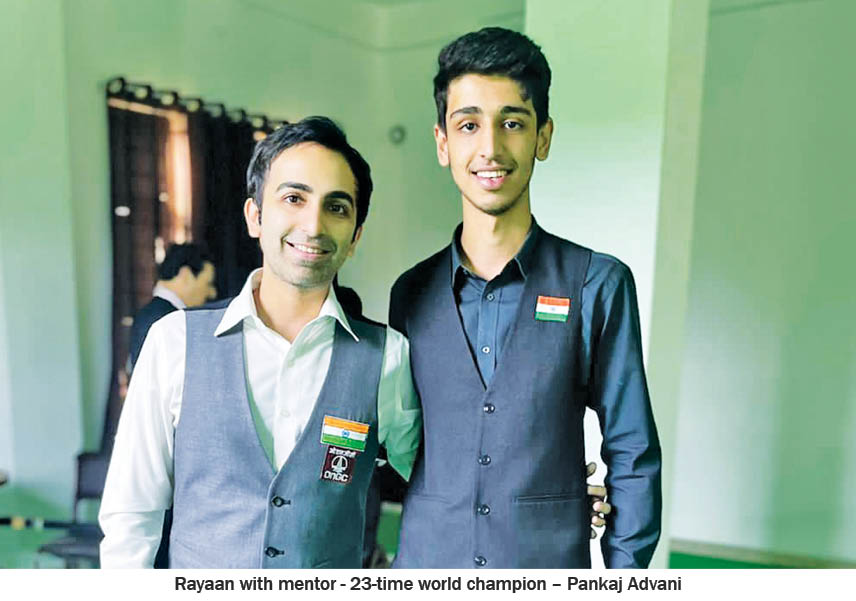 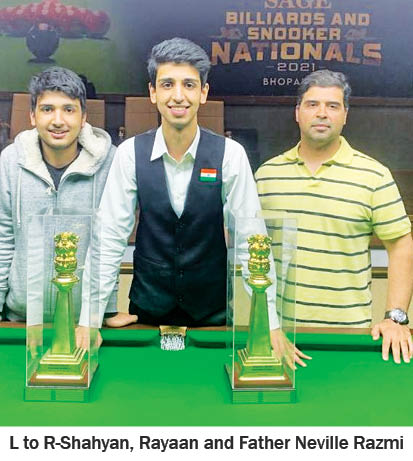 The two Mumbai-based, teenaged Razmi brothers – 19-year-old Rayaan and 16-year-old Shahyan, have been the toast of the Snooker and Billiards circuit, with their outstanding performances and wins, doing the fraternity and the community very proud!

Following in his brother’s footsteps, Shahyan ranked No. 2 and 3 in the Sub-Junior Billiards and Sub-Junior Snooker Tournaments, respectively, at the recently concluded 2021 National Championship (Sage University). At the 2019 Maharashtra State Championships, he ranked Maharashtra No 2 (Silver medal) in the Junior Snooker Tournament while in 2017, he ranked No. 2 and 3 in Sub Junior Snooker and Junior Snooker. He came out on top at the ‘Under-16 All-India Snooker Camp’ in Delhi and thereby went on to represent India at the ‘World Snooker Championships- Russia’ in 2019, finishing in the top 16. In 2020 and 2021, he missed the top three positions by a place or two.

Partners through thick and thin, Rayaan and Shahyan, were greatly influenced by watching their father, Neville Razmi, play at various clubs. Speaking to PT, Rayaan shared, “When I was 11, I’d accompany my father and keenly watch him play. I started learning the nuances of the game and finally participated in the Radio Club Tournament and won! That motivated me to play the sport seriously. I initially started with Snooker and by age 13, I took to Billiards.” Shahyan started even earlier, at all of 9 years! His fascination for the differently coloured balls on the table soon became an inspiration as he watched his father and brother play. With dad’s encouragement, he also started participatng in tournaments. Thereon, there was no looking back for the Razmi siblings!

“Our father always motivates us, pushing us to give more than our hundred per cent, each time we compete. He accompanies us at all our tournaments and it is a big plus to have a coach at home itself,” says Shahyan who, along with Rayaan, look up to their dad as their ‘first coach’. Rayaan also trains with his mentor, India’s first professional snooker player – Yasin Merchant. Donning the India flag on their chest while competing at tournaments, is a feeling of pride for Rayaan and Shahyan, giving them an added responsibility, pressure and motivation to perform.

Sharing his views on the high level off mental fitness required for sports like Snooker and Billiards, Rayaan says, “I’ve developed great focus through studies – this applies while playing the sport too, keeping my mind from not wandering about. For my physical fitness, I work out in the gym.” Both committed brothers train diligently to master their games at Radio Club, Parsee Gymkhana, Elphinston Cricket Club. They’ve even faced each other on numerous occasions in tournaments! While both are supportive of each other, they both play to win as individuals too. Sharing their different approaches towards the games, Shahyan says, “I am more attacking as a player, wanting to finish off quickly. Rayaan takes his time and is more strategic about his shots.”

Proud parents, Neville and Tasneem comprise the solid and indispensable support system that keeps the talented and accomplished brothers going and raising the bar. Shares Neville, “The boys are fortunately good in academics and sports and all three of us are very passionate about Snooker-Billiards. Together, we will accomplish great heights.” Adds mother Tasneem, a college professor, “As a mother I ensure their studies do not get affected. I play a supportive role, since I don’t know the technicalities of the sport. Playing both sports, their confidence has grown tremendously – that leads one to success.”

Here’s wishing Rayaan and Shahyan the very best in their future. May they continue to excel in their sport and reach new heights and continue doing their family, the nation and the community proud!