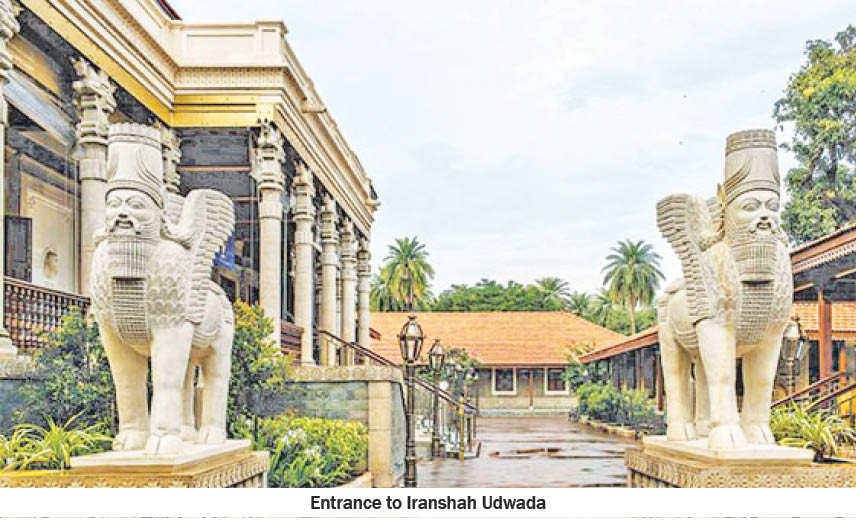 Ever since Iranshah has been re-enthroned in the recently repaired and renovated main building at Udwada, there has been fresh interest in understanding the significance of the winged, human-headed bulls that guard the entrance of the sacred Atash Bahram. One also finds winged human-headed bulls at the entrance of the Boyce Agyari at Tardeo, Maneckji Seth Agyari and Vatcha Agyari, both in Fort, Mumbai, to name just a few. 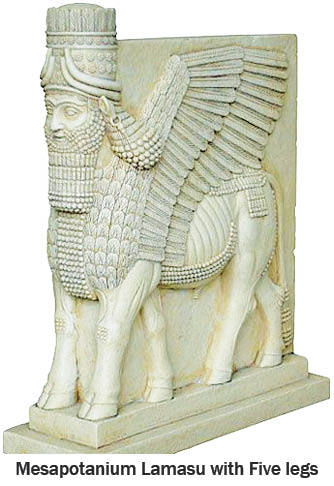 Ancient Roots: To begin with, this figurine is called ‘Lamassu’, and it is not of Persian or Iranian origin. The Persians adopted it from an earlier but neighboring civilization. The earliest depiction of this mythical animation goes back to the Sumerian civilization of Mesopotamia (modern Iraq). Lamassu frequently appear in Mesopotamian art and mythology. The first recorded Lamassu dates back to 3000 BCE almost twice as old as Persepolis. The Sumerians recognized a protective female deity named Lama, rendered as Lamassu in Akkadian, who was a servant of the Gods.

The Lamassu, as we know and see today, appeared a little later, in the Assyrian (modern Syria) culture, between the ninth and seventh centuries BCE and was envisioned as a male protective spirit with a long-coiffured Assyrian beard. The female form was called ‘Apsassu’.

Mythical Form: Mythical hybrid forms with human heads and animal bodies are quite common among ancient cultures. Perhaps the most ancient and well-known example is the Sphinx of ancient Egypt, which is a lion with a human head. Both, the Sphinx and the Lamassu, were built as guardian figures for important architectural structures, except that the sphinx guarded a mortuary temple and the Lamassu guarded a palace.

Five Legs: Lamassu often stood on five instead of four legs. Ancient sculptors probably gave these guardian figures five legs so that they appeared to be standing firmly when viewed from the front, but striding forward when seen from the side. Five legs may have also symbolized the progress of the five senses. During the Neo-Assyrian Empire (883-612 BCE), these gigantic figures were placed as gateway guardians at the entrances of royal palaces like Khorsabad and Nineveh. They were placed at entrances in order to ward off evil influences.

The Persian ‘Gopatha’: The quintessential feature of Persian architecture was its eclectic nature, with elements of Assyrian, Egyptian, Median and Hellenistic features and iconography, all incorporated in a seamless collage, yet producing a unique Persian identity seen in the finished product. 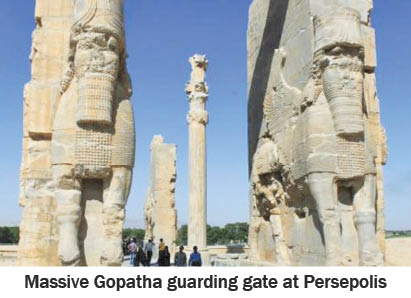 Achaemenid architectural heritage, beginning with the expansion of the empire around 550 BCE, was a period of artistic growth that left an extraordinary architectural legacy, ranging from Cyrus the Great’s step-pyramidical tomb in Pasargadae to the splendid structures of the opulent Spring capital of Persepolis, near modern-day Shiraz, in Iran. Similar architectural infrastructures were also erected at Susa (Province of Khuzestan in Iran) and Ecbatana (modern Hamadan) by Darius the Great, serving similar functions as Persepolis, including reception of foreign dignitaries and delegates, performance of imperial ceremonies and duties and also housing the kings.

Achaemenian Kings – Darius and Xerxes – also placed these majestic figurines (Lamassu) at the entrance of Persepolis as a protective force. However, at both – Persepolis and Susa – one can also see depictions of a being with the head of a man, body of a lion and wings of an eagle, resembling a Lamassu.

The Persians called Lamassu as Gopatha. The Parsis in India call them Godha or Gopatshah.

According to archeologists, Lamassu or Gopatha featured only in the Achaemenid architecture. The Parthian and Sassanian kings did not use these majestic figures. The huge Lamassu at Persepolis remained buried under a mound for centuries after Alexander’s invasion and came to light only when excavated in the early 1930s.

Guardians: These Gopatha or Godha have stood guard outside several Agyari and Atash Bahram, just the way statues of guardian lions have traditionally stood in front of Chinese imperial palaces, imperial tombs, government offices, temples, and the homes of government officials and the wealthy, and were believed to have powerful mythic protective powers. Chinese or Imperial guardian lions are a traditional Chinese architectural ornament. Typically made of stone, they are also known as stone lions or Shishi. They are known in conversational English as ‘lion dogs’ or ‘foo dogs.’

Significance Of Gopatha: The Gopatha assimilates and symbolizes the qualities of Strength and Courage (in the body of the Bull or Lion), the quality of soaring high with sharp vision (with the Wings of an eagle) and Wisdom and Intelligence (with the human head).

Thus, the Gopatha outside the fire temple not only stands as a symbolic guardian against all forces of evil, but also as a reminder to every devotee who enters the house of worship, to acquire physical and spiritual strength (in order to live a purposeful life), aim high and look afar (for the welfare of this world) and live life intelligently with wisdom.