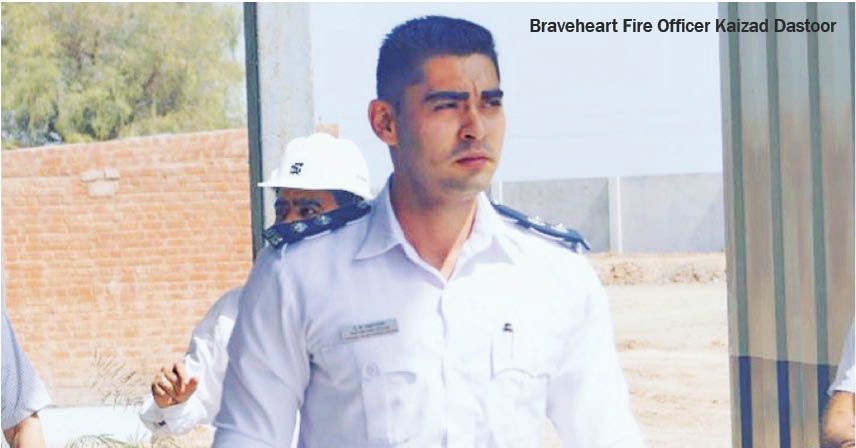 Not too long ago, Fire-fighting was a common career choice in the Parsi community. The walls of many Parsi homes still proudly bear those black-and-white photos of our erstwhile ancestors, standing upright in their crisp, fire-fighting uniforms, with that stern-yet-accomplished smile upon their faces, which speaks of their heroic tales of rescue. Every time one would hear the sirens from speeding fire-engines, rushing to put out fires or save human and animal lives from various calamities, we would say with awe and relief, ‘Bumbawala aaya’.

These days, there’s precious few Parsis who step up to the fire-fighting plate. Which is why, when we got to know of Ahmedabad-based, third-generation (no less!) Fire Officer, Kaizad Mehernosh Dastoor – who was promoted in February 2022, as Chief Fire Officer of Gandhinagar (capital city of Gujarat), making him India’s youngest serving Chief Fire Officer – we knew that this special man and his story would add to the ‘special’ element of PT’s Jamshedi Navroz Special Issue! 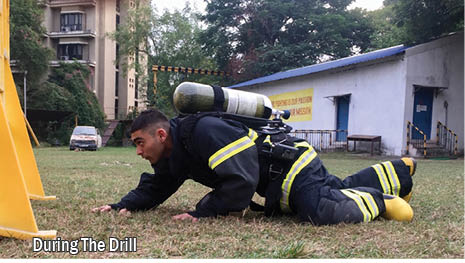 Kaizad Dastoor takes forward the valiant fire-fighting family tradition from his father, Mehernosh Faramroze Dastoor, as well as his grandfather, Faramroze Erachshaw Dastoor – both intrepid Fire-fighters, who greatly inspired Kaizad. While his father served the A’bad Fire Station from 1984 to 2021, being on call 24/7 for any emergencies, and was awarded the prestigious President’s Medal for Gallantry, his grandfather joined A’bad’s Fire and Emergency Services in 1958 as Station Fire Officer and became Chief Fire Officer, going on assume Advisor to Gujarat Government status in 1977, till he retired in 1990. He was bestowed the President’s Medal for Meritorious Service. 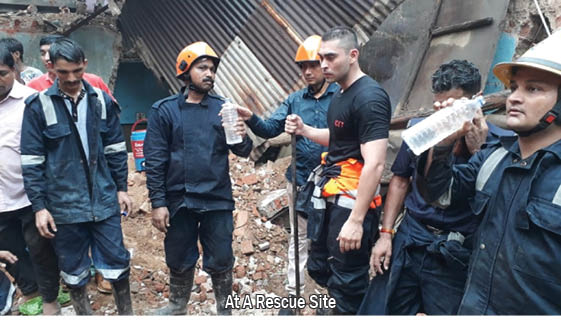 Growing up as child within A’bad’s Fire-station premises, Kaizad would watch fire-engines and firemen conduct daily drills and preps, from his balcony which overlooked the training grounds. This early exposure, which imbibed a sense of kinship with firefighters in him, paved the way to his current position as A’bad’s Divisional Fire Officer as well as Chief Fire Officer of Gujarat’s capital city, in charge of all the passive and active fire or emergency safety and contingency arrangements for VVIPs, including Chief Minister, Prime Minister and other visiting dignitaries.

Sharing his story with Parsi Times, Kaizad says, “It all started on 26th January, 2001, when Gujarat was shaken by massive earthquakes. I was just eight then, at home with my mother and two siblings. We started evacuating hastily, on experiencing the tremors – we were scared and confused and didn’t know what to do. Dad had gone with his team for search and rescue operation in other regions and his absence made us panic even more. But the other fire-fighter kept us safe. 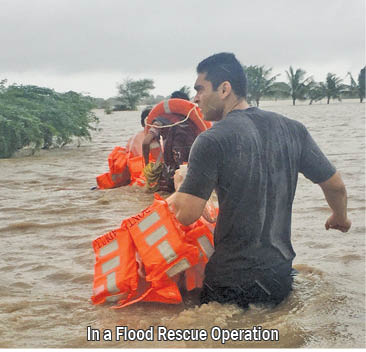 Lots of lives were lost that day. I felt terrible, experienced sleepless, shivering nights, filled with fear. That’s when I decided to never sleep or live in fear again – I would work and train hard to be able to protect myself, my family and others. That’s how I joined the Fire and Emergency Services, because I’d experienced first-hand both, the helplessness – of knowing our lives were in danger and that we could die any moment; and the relief – when help suddenly appeared, like we’d been given another chance to live and do something better with our lives. I stopped watching these brave men being trained from my balcony, and post my graduation in 2014, I became one of them, as I resonated with their higher sense of purpose.”

Kaizad prepared for the entrance exams of The National Fire Service College, Nagpur (Ministry of Home Affairs), and worked doubly hard, knowing he’d have to wait a year to appear again if he failed. With his dad’s immeasurable support and guidance, he cracked the exams and joined the college known for its high-level training, second only to the Indian Army. Up at the crack of dawn, he put in his all for the challenging daily drills, to come out on top, clearing his Sub Officer’s course with distinction and a Gold medal! 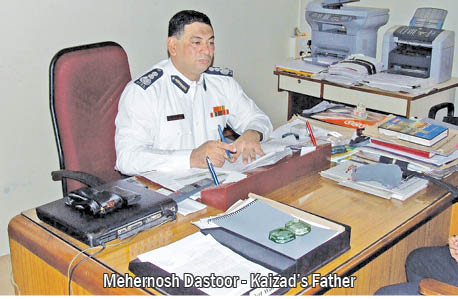 A year later, he repeated his success, being promoted as Station Officer and clearing his Instructors Course (Diploma in Fire Engineering) in the first attempt with distinction and another Gold medal! A third promotion, as Divisional Fire Officer and Gold Medal in Advanced Diploma in Fire Engineering followed, in 2016, even as Kaizad mastered the requisite details of over 40 subjects and activities including chemistry, explosives, different types of rescues, daily drills, aircraft terminology, air conditioning and refrigeration, IC engines, ship terminologies, rope rescue techniques, radioactive materials, first aid and basics of different engineering fields.

“All this was achievable largely thanks to the support of my father and his 33 years of experience in this field. This field calls for comprehensive knowledge across various genres, as accidents can happen in any form and at any time. When I started the course, we about 42 officers, but by the time the courses ended, there were just 16 of us left!”

Kaizad joined the Junagadh Fire and Emergency Services in October 2017 as Fire Chief, handling the city, nearby divisions and almost the whole of South Gujarat. His upwardly mobile career graph, fuelled by his hard-work and ambition, saw him join Ahmedabad Fire Services as Station Fire Officer in June 2019.

By January 2021, he was promoted as Divisional Fire Officer, having carried out innumerable rescue operations including fires, saving animals – even lions that had fallen in deep wells in Junagadh city, which houses a lion sanctuary; as also retrieving dead bodies from crocodile-infested rivers, saving people from drowning, structural collapses, and more.

Beaming with pride, Kaizad’s father, Mehernosh Dastoor, shares with Parsi Times, “I’m really proud of Kaizad being selected as Station Fire Officer, then promoted to Divisional Fire Officer in such a short time, followed by the greatest surprise of being instated as the Chief Fire Officer of Gandhinagar in February 2022, making him the youngest Chief Fire Officer of the nation! It’s a moment of immense pride for me as my son carries forward the family legacy in the same department with merits, in all courses and selections, which my father started, way back in 1958. By the time my son retires in 2051, it will be 93 years of our family’s legacy of uninterrupted service!”

But there’s even more than this to Kaizad, who will turn 29-years-old in April, next month. He’s a national level shooter with numerous national-level wins and the recipient of the Sardar Patel Award in Rifle shooting. He’s also been an athlete since his college days, having won awards in shot putt, javelin throw and discus throw; and he’s also won the title of ‘Mr. Ahmedabad’, twice, in Men’s Aesthetic Fitness Championships! “My only goal is to Not stop at whatever is the known limit in my field. My ambitions were clear from the very beginning – that I will change the way people see this department and what we do contribute to society, that goes unnoticed. If I can achieve all this by the age of 28, I’m sure there’s lots more waiting for me, further in my life!” says Kaizad

So, doesn’t such a rough and risky career cause concern for his life, we ask him. “Hazards lie everywhere – in cooking on a gas stove, walking on the streets, living with a concrete structure above your head, carrying lithium batteries in your pockets, switching on electrical appliances or even refuelling your car! My profession is a slightly elevated occupational hazard as compared to the rest. That’s why it’s imperative to stay safe, stay informed and always be prepared!” replies our braveheart, who’s surely the cynosure of his much-accomplished family, comprising his mother – Ashish Dastoor, a beauty consultant; brother Kaivan Dastoor – a Gujarat High Court lawyer; and sister Kaivashin Sethna – who heads her own cyber-security firm -‘Invesics’, in A’bad.

Even as we take much pride in the inspiring Dastoor family and applaud Kaizad’s outstanding achievements, inexorable courage and dynamic spirit, the one thing that fills Kaizad’s heart with pride, is being Parsi! “I’m always looked at in a positive way wherever I have gone and worked – it’s always a happy and proud feeling when people come to know that I’m Parsi and excitedly ask, ‘Tu Bawaji chhe?’ and I proudly answer, ‘YES!’ and think of all the great things that our ancestors must have done, to still be called upon with such admiration and fondness!” he says.

With a few words for fellow community members, Kaizad concludes, “My only message to my dear community members, especially our youngsters, is that we are known for our trust and hard-working nature. DO NOT destroy that legacy, for we are looked at upon with respect for that. Nurture high ambitions in life and learn to understand the difference and identify that thin line which differentiates between ‘enjoying your youth’ and ‘destroying your future’. Stay safe and prepared always. And Jamshedi Navroz Mubarak to all!”