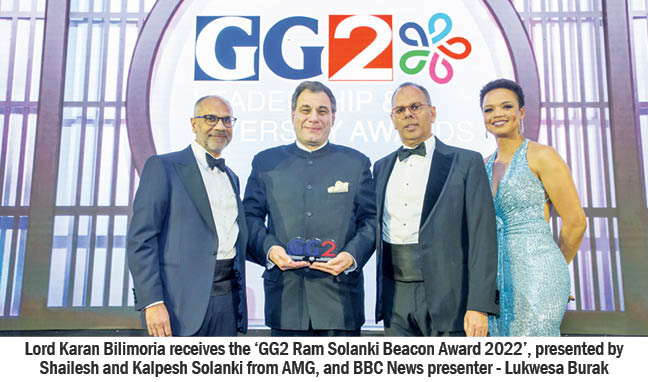 The prestigious GG2 Power List – recognised as one of the most extensive guides to power and influence in the UK, yearly profiling 101 individuals of Asian background, who have made it to the top and whose achievements have been recognised on a global level – was unveiled on 8th March, 2022, at Eastern Eye publisher, AMG’s high-profile and glittering GG2 Leadership and Diversity Awards event.

This year, two stalwart Zoroastrians have been featured in the Top-20 of this globally acclaimed list – ZTFE patron, Lord Karan F Bilimoria CBE DL (ranked 6th), Chairman and Founder of Cobra Beer Partnership, and President of CBI (Confederation of British Industry); and Adar C Poonawalla (ranked 15) – Founder and CEO of Serum Institute of India, the world’s largest producer of vaccines in volumes and producer of the life-saving covid vaccine, Covishield.

Adding to this moment of pride and joy for the Zoroastrian community, Lord Karan F Bilimoria CBE DL was recently awarded the ‘GG2 Ram Solanki Beacon Award 2022’. Established in honour of Late Ramniklal Solanki, Founder and Editor-in-Chief of the Asian Media Group, the GG2 Ram Solanki Beacon Award is presented to an inspiring individual for their exceptional contribution to Britain and ethnic communities.

Expressing pride on the occasion, the Zoroastrian Trust Funds of Europe (ZTFE) Trustee, Rusi K Dalal shared the statement, “Naturally we are thrilled with joy that today, in the 21st century, we have two Zoroastrians in the Top-20 of the Power List of Minority Community members in the United Kingdom. We are the smallest community in the UK, numbering around 5000.  Over a century ago, we had the first three members of Parliament in the United Kingdom who were all Zoroastrians and ZTFE members. Even then, we were the smallest community in the UK, numbering just around 50! Kudos to both – Lord Karan F Bilimoria CBE DL and Adar C Poonawalla. We salute them for maintaining our status and standing in the UK, despite our minuscule numbers.”

Established as the premier awards for inclusion, diversity and leadership in the UK, the GG2 Leadership and Diversity Awards recognises Britain’s cultural diversity, shining a light on the extraordinary, hidden talent within ethnic minority communities. The list is compiled annually by Eastern Eye’s sister title GG2, and put together by senior editors of Asian Media Group, highlighting extraordinary achievers from all walks of life. It profiles the inspirational journeys of remarkable people who have excelled in their fields, made a huge contribution during the pandemic and more importantly, used their talents for the greater good.