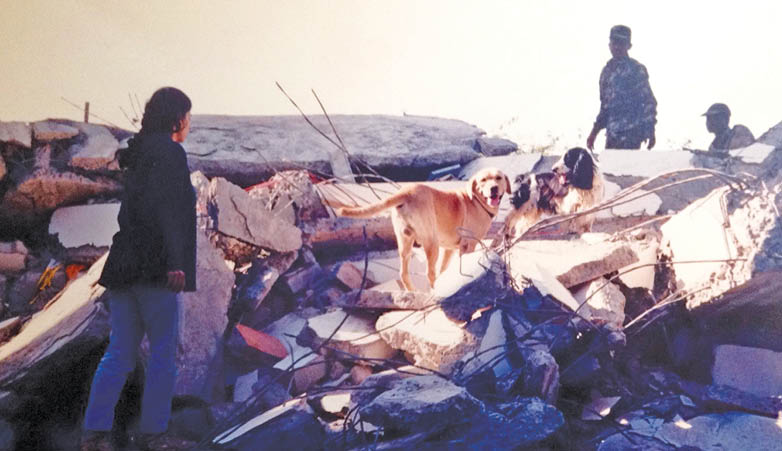 Shirin Merchant is India’s pioneering Canine Behaviourist and Trainer. The following is a riveting excerpt from her soon-to-be released book, ‘The Search Dogs of Bhuj’. 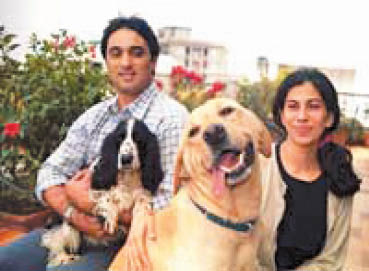 The dog stopped dead in his tracks. His little black nose quivered with trepidation. Something was very wrong. He looked over at me puzzled. “Go on, Snoopy, find ’em,” I urged him as I scrambled over loose rubble, trying hard to keep my balance. He stared ahead blankly briefly, then put his nose to the ground and resumed his search. The sun was setting and every minute counted; there could be someone buried deep inside the debris, praying to be rescued before winter’s cold fingers wrapped around them for the third night in a row.

26th January, 2001 started out as a beautiful day. In the town of Bhuj, Gujarat, the children lined up at school grounds for the mandatory Republic Day ceremony. As the first notes of the national anthem lilted into the crisp morning air, a devastating earthquake struck. Buildings crumbled like packs of cards, bridges developed gaping cracks and roads disappeared altogether. People ran wildly, leaving their worldly possessions behind. Measuring 7.9 on the Richter scale, the earthquake wiped out towns in a matter of minutes.

As soon as we heard about the devastation, my husband and I bundled up our two search-and-rescue dogs into our van and joined the army convoy to Bhuj. As our van followed the army trucks from one ruined village to another into the heart of the epicentre of the earthquake, we stared agape at the devastation wrought. We reached Bhuj in the early hours of the morning. Senior army personnel welcomed us warmly – we would be of great help to them, they said. After all, Snoopy, a Cocker Spaniel and Sunny, a handsome yellow Labrador, were the only two civilian dogs in India trained to sniff out people lost or buried under wreckage.

The next morning, the army took us to what must have been a ten-storey building, but was now just a large mound of rubble, I fervently prayed we weren’t too late. It was already day 3, too late to find anyone alive. Statistics show that chances of finding people alive in a calamity greatly reduce after the first twenty-four hours; after 72 hours, it would be a miracle to find someone alive.

The Turkish Search-and-Rescue dog team was working through the rubble in the building, so we shifted to a neighbouring building and started work excitedly. Minutes turned into hours, but the dogs didn’t once indicate a person alive. Disheartened, we turned away.

As we started to leave, a young man who I noticed was keenly watching the Turkish dog at work, came over to me and politely requested me if our dogs could find lost people. When I confirmed that they could, he softly requested me if Snoopy could search the building again. At that point, the army officer intervened and brusquely informed him that it was a waste of time as one team had already crossed out the building for any survivors; the dogs were urgently needed elsewhere. Please, the young man begged with folded hands, his eyes welling up with tears, just once let your dog tell me that my family is no more.

I knew the Turkish dog had searched thoroughly and there could be no survivor, but often the heart overrules the head. I gave Snoopy the command and sent him out in the general direction of where the man thought his apartment had collapsed. As we watched Snoopy scour the area, the man, Rishi, told me that his family was preparing for a picnic on the fateful day. He had left a few minutes earlier to pack the car when the earthquake struck, felling the enormous building in a matter of seconds. He doubted that his family was alive, but wanted our ‘Indian’ dogs to confirm it.

Fifteen minutes later, after Snoopy indicated that there was no one alive. I requested Rishi to let us end the search. I understand, he said, crestfallen. He then knelt down in front of the panting Cocker Spaniel and gently requested him for his paw. Solemnly the dog lifted his paw and the man held it tight with both his hands and thanked the dog. He then insisted I give him my e-mail address as he walked away.

We were then bundled by an impatient army officer into the van and driven straight to an apartment complex in the heart of the town. Four buildings all attached to each other had collapsed with thousands of people trapped inside. What should have been the central courtyard was now a debris strewn pile two storeys high. A large and impatient crowd consisting of relatives, family and bystanders had gathered outside. As I looked at the large expanse of debris ahead of me, my heart sank. There was no way two dogs could cover all this ground alone. But the canines rose to the occasion and walking over twisted metal, broken glass and bloodied clothes, relentlessly explored every foot. They didn’t let the overpowering sweet stench of death mingled with the scent of freshly crumbled cement and concrete distract them.

Hours passed with no indication from the dogs. Just as we were about to call off the search, Sunny started behaving oddly.  He stopped on a mound of earth and whined plaintively, refusing to budge. “What’s wrong, boy?” my husband asked him. Sunny replied with another whine. Initially, my husband was puzzled but his sixth sense told him that the dog was onto something.

The army officer asked for a few shovels and five men started to dig. After an hour of digging, one of the men gave a shout. And everyone rushed forward to see. Five feet below where Sunny had whined, lay the body of a woman. Her head was smashed and legs trapped under a fallen beam. Within minutes, her relatives were located and the body carefully extracted. Her family was extremely grateful that her body was found; they could now give her a decent funeral. In course of the afternoon, Sunny located over three dead bodies.

After searching the apartment complex for over three hours, I headed back to the van with both the dogs in tow, I noticed a group of men following close behind. Panicking, I started to run, but they caught up before I could reach the van and stood in front of me, blocking my access to the van. My heart was beating wildly as I wondered whether they were going to harm the dogs. As I saw one of them reach into his pocket, I hastily pulled the two dogs behind me. But my fears were unfounded. In his outstretched hand, the man held a wad of notes.  Please accept this payment for your services, he said politely. I stared dumbfounded at his hand and then at his face. No, no, there is no need to pay us, I whispered, embarrassed by his gesture. Then can we at least offer you a cup of tea, requested another. By now a small group of people was assembling around the dogs and me. A little boy, with tearstains on his cheeks, came forward with a packet of biscuits, and shyly asked if he could feed the dogs. Too stunned to speak, I nodded my consent. Standing under the hot mid-day sun, surrounded by strangers trying to repay us for the small act of assistance we had performed was overwhelming and my head spun.

Often, some of the hardest lessons we learn about the value of life can only happen when surrounded by death. The dignity of these people who had lost everything, their hope of the future and their simple gratitude for being alive taught me what really matters is being alive, everything else can disappear in a heartbeat.

By day four, the hope of survivors was next to impossible. With the fear of disease creeping up, the government had called in large bulldozers that were decimating the rubble. There was no point in us continuing to stay.

A month later, just as things were returning to normalcy, I got an e-mail from Rishi. He mentioned that he only managed to recover one body from the debris, his father, sister and brother were never found. “Through all the chaos I faced on that unforgettable day, your dogs brought peace to my mind and calmed my soul,” he wrote. “…And even though they could not find my family, I remain eternally grateful to Snoopy and you for trying. I remember you and your dogs in my prayers everyday. God bless you and the dogs.”