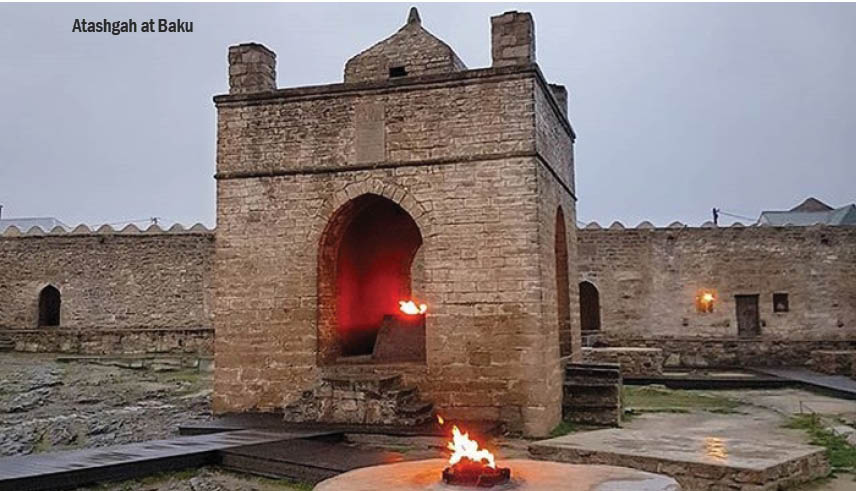 The holy month of Adar commemorates fire, the source of energy and dispeller of darkness. The Supreme Divinity or the Source of all Creation is unseen to the human eye and unconceivable to the ordinary human mind. However, fire is the closest that the human eye and mind can get to visualize or experience Divinity; since fire has no body and yet seems alive in the form of dynamic light, heat and energy. It seemingly coming from nowhere on kindling and disappear on dousing. 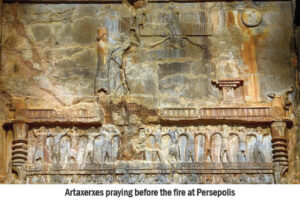 Adar Yazata – The son and purifier: The term Adar is derived from Pahlavi Adur and Avestan Atar, which later on in Persian became Atas! In Zoroastrianism Adar Yazata represents Ahura Mazda as his Puthra (variously translated as son from Sanskrit Putra and by Ervad Kawasji Edulji Kanga as a ‘purifying force’). In other words, a duly consecrated fire to a devout Zoroastrian is what Jesus Christ is to a devout Christian – the Son of the Supreme Divinity, as also His purifying force on earth.

At duly consecrated fire temples the Holy Fire is seen as a Divine Medium or Channel or Mediator through which the Supreme Divinity is worshipped, just the way Agni is central to the Yajna (Avestan Yasna) ceremony in the Vedic tradition.

Revered in ancient Iran: At Persepolis (the spring capital of the Great Achaemenian Kings) as also at the Persian Necropolis known more popularly in Iran as Naqsh-e-Rustom, one finds images of the Great Kings Darius, Xerxes and Artaxerxes praying before fire. The Parthians of ancient Iran too prayed at their Atroshan or “place of burning fire” while the Sasanian kings established several Atash Bahram (Fire of Victory).

During the Sasanian dynasty there were three Great Victory-giving Fires (Atash Bahram) which we remember to this date when reciting the Atash Niyaesh or litany to the fire – Adur Gushnasp (fire of warriors), Adur Farnbag (fire of priests) and Adur Burzen-Mihr (fire of farmers)! All three were said to have come into the world at the beginning of creation and believed to have been kept burning by priests who tended them. 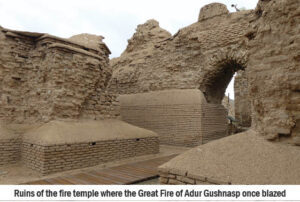 Adur Gushnasp was considered the Greatest of the Great Fires by the Sassanian monarchs who were themselves of the warrior class. The fact that this Great Fire blazed at what is today known as Takht-e-Soleyman in the West Azerbaijan Province of Iran is archaeologically attested. Gushnasp alludes to a myth concerning the flame of this fire attached to the mane of a stallion that Shah Kay Ḵosrow of the Kayanian dynasty rode.

Adur Farnbag is believed to have blazed at Pars (modern-day Fars) in Southern Iran. Farnbag alludes to glory or good fortune. The priests of Sasanian times believed that this fire originated during the reign of Shah Jamsheed during Peshdadian times.

Adur Burzen-Mihr was the fire of farmers and believed to be the fire of Mihr or Meher – the Divinity responsible for fertile fields and fighting the demons of drought and poor harvest. This fire is believed to have blazed in north-eastern Iran.

The Atashgah at Baku (Azerbaijan): Atashgah means the ordained place of the fire and Azarbaijan means land of fires. The Baku Atashgah also known as the Fire Temple of Baku, is an ancient religious shrine in the Surakhany town, a suburb in Baku, Azerbaijan. The fire was originally fed by natural naphtha gas from the ground.

Based on Persian and Indian inscriptions on the inner walls, this shrine is believed to have been used as a Hindu, Sikh, and Zoroastrian place of worship. The pentagonal complex, which has a courtyard surrounded by cells for monks and a tetra-pillar-altar in the middle, was built during the seventeenth and eighteenth centuries.

It was abandoned in the late nineteenth century, probably due to the dwindling Indian trading population in the area. The natural eternal flame went out in the year 1969, after nearly a century of exploitation of petroleum and gas in the neighbouring area. However, it is now lit by gas piped from the nearby city.

The Baku Atashgah was a pilgrimage and philosophical center of for those involved in trade with the Caspian area via the famous Grand Trunk Road.

Fire in Jewish and Christian Tradition: In the Jewish tradition God has been variously depicted in the form of a burning bush as witnessed by Moses on Mount Sinai and in the form of a pillar of fire near the Red Sea by the Hebrew slaves who Moses led out of Egyptian captivity.

Holy Fire at Jerusalem: In the Christian tradition there is the tradition of the Holy Fire at the ‘Church of the Holy Sepulcher‘, also known as ‘Holy Sepulcher’, which is a church built at the traditional site of Jesus’ Crucifixion and burial in Jerusalem. According to the Bible (John 19:41–42), the tomb of Jesus was close to the place of the crucifixion, and so the church was planned to enclose the site of both the cross and the tomb.

The Holy Fire (or “Holy Light” as recognized by the Eastern Orthodox Church) is described by Orthodox Christians as a miracle that occurs every year at the Church of the Holy Sepulcher in Jerusalem on Great Saturday, or Holy Saturday, the day preceding Orthodox Easter.

There is a belief that the Holy Fire rekindles annually on the day preceding Orthodox Pascha (Orthodox Easter). At this time, blue light is said to emit within Jesus’ tomb, rising from the marble slab covering the stone bed believed to be the stone upon which Jesus’ body was placed for burial. Even for rationalists who think and believe that what happens every year at Jerusalem is not a ‘miracle’, what is significant to note is the symbolic depiction of the rising of the Son of God (Jesus) in the form of light and fire.

The Holy Fire at Shirdi: At the Holy Shrine of Sai Baba at Shirdi, the ‘Dhuni’ is a significant part of Dwarkamai. The Dhuni is the sacred, perpetually burning fire that Sai Baba himself had kindled and which has been maintained ever since. Devotees say that fire was important to Sai Baba and wherever he stayed – whether under a neem tree, in the forest, or in a mosque – he always kept a Dhuni.

May Fire Bless one and all with the light of knowledge and wisdom, the warmth of love and friendship and life that is energetic and dynamic!