Commencing auspiciously with a Jashan in the morning, performed by the Madressa’s students, the program was held in the DAI Hall which was completely packed with Mobeds, Madressa parents, Panthakies of numerous Agiaries, various resource professionals who shared their valuable services by conducting training programmes for EM, donors and the EM team. 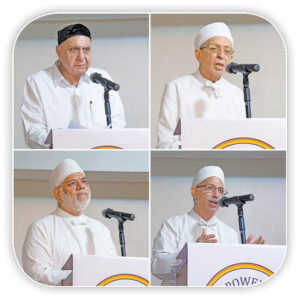 Gracing the dias were Vada Dasturji Khurshed Dastoor of Udvada, Vada Dasturji Keki Ravji (Meherji Rana) of Navsari, Chairman of WZO Trust Funds and Founder of EM – Dinshaw Tamboly, who has been a constant motivating force; and the Principal of DAI – Er. (Dr.) Ramiyar Karanjia.

The programme, which was hosted by Er. Kaizad Karkaria, Manager of Rustom Faramna Agiary, began with the chanting of a Humbandagi led by Team EM member Er. Hormuz Dadachanji, the Panthaki of Mithaiwalla Agiary.

Dinshaw Tamboly spoke about how EM was Binaifer Sahukar’s brain child, and shared the journey he nurtured from its fledgling phase which began in 2017 to its current day presence, and how it had greatly evolved and gained recognition as an officially registered Trust body. Dastoorji Khurshed Dastoor spoke about his strong belief in the idea of EM from day one. He said he supported it as he endorses the fact that performing prayer ceremonies and rituals is the primary duty of mobeds, but even so, their all-round development was important for overall progress and development.

Dasturji Meherjirana Keki Ravji spoke of his decades of vast experience of prayers and rituals and emphasised on the correct pronunciation of words in our prayers. He recalled the days when the pay scale for Mobeds was meagre and was glad that the situation has changed today and is improving due to the efforts of many supporters and the philantrophic donors like the WZO and the movement by team EM.

Er. Dr. Ramiyar Karanjia spoke about how DAI and EM have collaborated on various occasions and conducted training programmes for the Madressa children to encourage a better and smarter generation Mobeds for the future. He shared snippets  from the Vendidad scripture and shed light on the differences in the titles of priests.

Team EM member Er. Meher Modi spoke about EM’s illustrious journey, its various training programmes held in the past years and the many collaborations with Parsi groups like the XYZ, Jiyo Parsi, Return to Roots, HPY and DAI. He shared a glimpse of the future plans that EM looks to implement to continue ensuring a bright future and progress of young Mobeds.

Counsellor and Founder EM member Binaifer Sahukar, gave the thanksgiving speech, expressing gratitude to all the resource professionals, donors, supporters and participants of the programme. The function ended with the renditions of Parsi anthem – ‘Chaiyye Hame Zarthosti’ and national anthem – ‘Jana Gana Mana’, followed by a sumptuous lunch catered by Jimmy Gadiwalla.

EM was established with the main objective of building a bridge between the community and our faith, to empower Mobeds to evolve into becoming tomorrow’s leaders who will connect with community members facing challenging times and guide them with counselling, prayers and a deeper connect with our faith.

About By Er. Firdaus R. Pavri

View all posts by By Er. Firdaus R. Pavri →