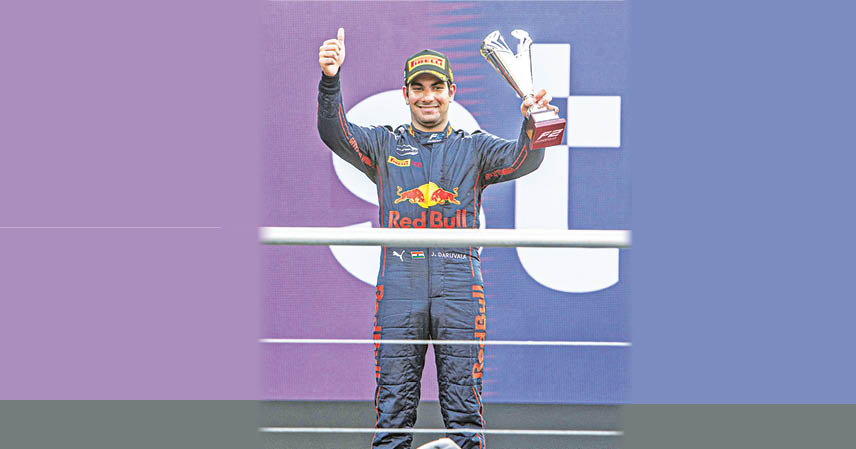 India’s top racer, Jehan Daruvala raced to his second podium finish of the season with a fighting drive from 14th to 3rd position, in Formula 2 Feature race at Saudi Arabia’s Jeddah Corniche Circuit, on 27th March, 2022.

23-year-old Jehan from Mumbai’s Dadar Parsi Colony, began his weekend on the back foot after a

mechanical issue hampered him in qualifying. But the Red Bull-backed racer used a mix of race craft, strategy and tyre management to claw his way up the order to third.

“It’s very satisfying,” said Jehan. “Coming into this weekend I knew Prema had a really good car. I was down after qualifying. But once we discovered that our lack of pace was down to a mechanical issue, it made me believe again… It was good damage limitation and honestly, third was probably the maximum we could have had today.”

Jehan, who went from 13th to 7th in the sprint race a day prior, earned his podium, his ninth in F2, with a

mature drive. Jehan leaves the Saudi Arabian round with a strong haul of points. He now heads to historic Imola for the next round of the season, from 22-24 April, 2022.

Jehan Daruvala began karting at the age of 10 in 2009. Two years later, he was picked as one of the three winners of Force India’s ‘One From A Billion’ talent hunt. In 2013, he became the first Asian to win the British KF3 karting championship. A proven winner, Jehan has won in every category he has competed in. He is

currently racing in the FIA Formula 2 Championship, which is a feeder series to Formula 1 and takes place on the same weekends. Already a multiple winner in the category, Jehan’s goal for the 2022 season is to claim the title which would boost his chances of becoming only the third Indian on the Formula One grid.