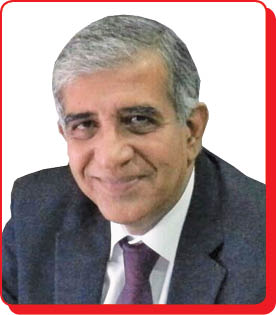 But overall, I can say today, with confidence and pride, that I have delivered the promises I made to the community in the last six and a half years, and never, compromised my principles as a Trustee. During my term, I have been a thorough team-player, ensuring the successful completion of various initiatives, even as I led from the front in most other projects.

The following are some of the initiatives and projects that I led from the front, which made a big difference and brought about much relief to the Community and the Trust…

Housing the community is and always has been my top priority as a Trustee – the one dream I wanted to deliver on when I became a Trustee. I sincerely believe that if we can take away the pain and worry of searching for a house from those in genuine need, especially young couples who have been waiting for years, then we would have done what matters the most.

In the first three years, the entire Board stood united with me and we refrained from selling/auctioning houses (under the guise of allotments on refundable security deposit) through this period. In the past six and a half years, 150+ houses, in what we call BPP Colonies, and 45 houses in the Wadia Colonies, have been allotted without any compensations.

However, over the three years that followed, auction of flats soon became the order of the day. In BPP Colonies, 1 in every 4-5 flats, was auctioned off. Whereas the ratio of flats auctioned to those allotted free was even more skewed.

Nearly 50% of the houses in Wadia Baug have been auctioned. It rankles me ‘charity flats’ meant to house community members are being sold at exorbitant values running into crores of Rupees, to the rich, under the faulty premise that this is the only way that BPP can raise funds for its operations. This to me is contra-intuitive and a failure on the part of the Trust.

My colleagues even threatened to file a 41 D Application (Removal of a Trustee by the Charity Commissioner) against me – hoping that I would compromise on my principles. Their final demand was that I not record my dissent publicly. Obviously, I did not agree.

Today, I am happy to say that the 200 houses allotted by this Board, were given to deserving beneficiaries, resulting in their smiles and blessings, which will stay lifelong with me.

Raising Funds For The Trust…

As a Trustee, I have always vehemently opposed the selling/auctioning of Charity Flats (which are meant for housing the poor) to the rich to raise money for the Trust. As Trustees, we must instead focus on raising donations, or at least project-oriented donations, to set the ball rolling.

My first experiment in raising funds was for the repair and refurbishment of the Gamadia Boys Hostel – which was as structurally weak as it was aesthetically run-down.

I started the fund-raising by publishing Appeals in the pages of Parsi Times. To my pleasant surprise, many ex-hostelites rose to the occasion! What was most heart warming was that it wasn’t just the financially successful people who came forward, but also those who simply wanted to contribute in their own little ways as they felt a bond with the hostel in which they had grown from boys to men, from students to thriving professionals.

As a Trustee, I believe it is my duty, as it is the duty of all trustees, to leave the properties that you are appointed custodians of, in the same state, if not better, by maintaining the properties or by improving upon them.

The success of this experiment encouraged me to take on a more challenging projects as it was proven that funds could be raised by ways alternative to selling/auctioning charity flats.

My Work In Doongerwadi…

After Vistaspar Mehta took over as Manager of Doongerwadi, he brought to my attention various issues, mainly the repairs needed for our Dokhmas, Bunglis, roads and other structures.

The Bisni Dokhma needed urgent attention structurally, which had been weakened by massive tree roots that had torn through its walls. Fearing that the next couple of monsoon seasons could lead to more structural damage, I took on this project, consulting with various experts – including structural engineer, Maneck Engineer; religious heads like Vada Dasturji Firoze Kotwal, Vada Dasturji Khurshed Dastoor and the respected and knowledgeable Er. Aspandiar Dadachaji to ensure we follow all the necessary religious tarikats, more particularly the steps to be taken for the consecration of the Dokhma, once it was repaired.

Once again, the money for this project was raised through Appeals in Parsi Times. I would be amiss if I did not thank our biggest donor – the Late Mr. Jal Sethna, whose largesse, towards both – the Gamadia Hostel and the Bisni Dokhma, contributed greatly to the successful completion of these projects.

Today, as the refurbished Bismi Dokhma stands strong, ready to take on the ravages of time for another 100 years, I feel privileged to have been at the forefront of this venture.

In fact, following on the heels of the repairs to Bisni Dokhma, based on the Appeals made, many donors came forward directly and through well-wishers and we were also able to revamp the toilet block, the bathing (Nahn) area, the Bunglis and some of the residential quarters of our pall bearers.

Doongerwadi projects presently in the pipeline, include repairs to be made to the Anjuman Dokhma and the two (large and small) pavilions, which hopefully the new Board will take on. Donations, working plans and time schedules for these future jobs are in place and hopefully post the next monsoons, this will be done.

Doongerwadi, in 2022, is physically in a much better condition that it was in 2016. And, as the trustee and custodian of this property, I’m extremely proud of this fact.

Maintenance Of Our Parsi Properties…

Looking after our properties is a key responsibility of trustees. Be it repairs to the Bhabha Sanatorium building or to various other residential buildings in Mumbai in different Baugs; or repairing roads, terraces or structural damages across different colonies… I’ve been instrumental and personally present to ensure the work gets done – right from our Southern-most colony, Cusrow Baug, to our northern-most colony, the BPP (Nirlon) Colony, in Goregaon, from flooding of roads, to leakages on terraces.

Once again, messages from relieved community members, who have benefitted from these repairs have been my reward.

When the DP 2034 (Development Plan 2034) was announced, many of our properties were affected by this new Development Plan. Along with our Administration staff, I met and attended various meetings – including those with the Collector, the Municipal Commissioner, and other senior Municipal officers… and my efforts paid off as we were successful in protecting our properties.

The most recent case in point being opposing BMC’s plan for widening the Lallubhai Park Road (Behind Bharucha Baug) which would greatly shrink our open spaces in the Baug.

I have put in great effort towards successfully increasing the revenue of the BPP, either directly or by enforcing savings, which ran into crores of Rupees. Be it increasing the income from various shops or recovering unpaid dues from the shopkeepers, I have helped increase revenue for the Trust.

Singlehandedly, I negotiated and renegotiated the rates of our Hoardings; Sales of our Borewell water; Rents and Franchise shares receivable from various shops in Jer Baug and Cusrow Baug; changing of water meters, etc., all of which resulted in saving crores of rupees for the Trust.

A small example would be an increase in the share that shop owners gave BPP from their Franchise fees, which were increased from less than 35% to 50% in almost all cases!

In 2019, the Union negotiations had completely broken down and would have surely ended up in Labour Court were it not for my negotiation skills and the courteous attitude of Union President Mr. Dhanji Netarwala, which helped us find an amicable and peaceful solution.  I was able to stave off what could have been an unpleasant and unnecessary labour problem. Just this one Union negotiation saved the Trust, more than Rs. 4 crores, over the next 3 years. Mr. Dhanji Naterwalla was kind enough to publicly acknowledge my role and thank me for resolving the issue.

I’m happy to share that I have settled quite a few legal cases, out of court, thus reducing litigation costs, as well as preventing the heartache that beneficiaries face in fighting legal cases with the BPP.

During the early days of COVID, I was greatly disturbed by the unfortunate suicide of a South Bombay based Parsi lady – especially when I discovered that she was unable to procure meals due to the lockdown. This led to my idea, that germinated into reality, of giving free or subsidised food to our community members across the city.

We planned and executed a centralised kitchen at Cama Baug and supplied over 6,000 tiffin-boxes to those in need, thanks to our volunteers and caterer Jimmy Gadiwala. We also set up a 24/7 Help Line for community members who were unable to fend for themselves during the Pandemic. Our volunteers delivered food, provisions, medicines and necessary items at the doorstep, in line with the Covid SOPs. We also organise daily food grains and essential items for our old age homes.

Our area of operation was from the southern-most tip of Colaba, all the way up to the northern most tip of Borivili. We even contributed financially for those in need of funds, to Parsis outside Bombay.

It is becoming increasingly crucial for all responsible citizens to embrace ‘Green habits’ that respect, preserve and conserve the earth and its resources. I have invested a lot of time and effort in initiatives including the Solid Waste Management Program which was successfully completed. It’s a matter of great pride that our model was used as the prototype to design one for the Governor of Maharashtra’s Bungalow.

Unfortunately, my colleague trustees, for reasons known best to them, refused to allow us to laterally deploy this project into other colonies. If this project does get deployed in colonies, we would save a minimum of Rs. 60 lakhs yearly, which we currently pay to private contractor for lifting our wet garbage.

Solid waste management is the way forward for a world that has to reconsider its carbon footprint, and especially for the followers of a religion that propagates not polluting our Mother Earth.

Along with the committee members of Cusrow baug, I played an active role in restarting the Rainwater Harvesting Project, which had unfortunately got stalled.

Fighting For The Community’s Right To Vote …

For over a year now, Noshir Dadrawala and I have fought – both in the Boardroom and in the courts – to ensure that the Scheme of Elections is followed, something that Trustees are legally bound to do.

The situation called for a unique form of protest – an indefinite hunger-strike to force the holding of these elections. When my colleagues went back on their commitments post the hunger-strike, we were forced to move the High Court and finally obtained the order to hold the elections on Sunday, 29th May, 2022. On this day, when you walk up to the polling booth and finally cast your vote, it will give both, Noshir and I, immense happiness.

Through my term as a Trustee, I have visited every single colony and every baug numerous times, and looked to addressing and resolving innumerable issues brought to me by community members. I’m humbled and proud to have been christened by some friends and community members as ‘The Peoples’ Trustee’. I have always wanted to be, I have always been, and I will always be the ‘People’s Trustee’.