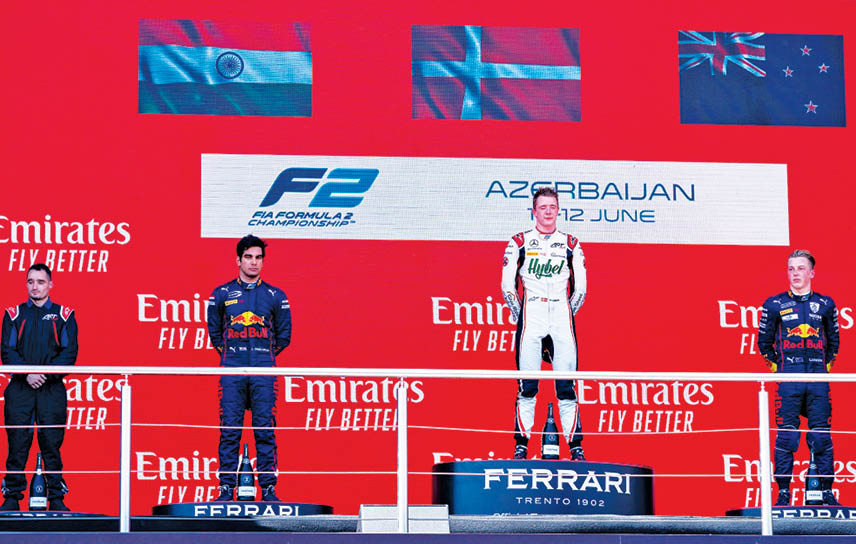 Indian racing champ, Jehan Daruvala came within half a second of his first Formula 2 win of the season in Azerbaijan round’s Sprint race in Baku, on 11th June, 2022. The Red Bull-backed Prema driver crossed the line just 0.380 seconds behind ART’s Frederik Vesti, at the end of a safety car-disrupted race.

23-year-old Jehan started third and, having vaulted into the lead with a masterful display of race-craft at the start, was on course for a dominant win around the unforgiving streets of Baku. He had even kept the lead through the first of three safety car periods, which wiped out his 4-second advantage. But a slight lock up on cold brakes at the second safety car restart allowed Vesti to slip past just three laps from the finish.

Jehan said, “I would be lying if I said I wasn’t disappointed but I’m still happy with the race I did. I had a great start, had everything under control and felt I deserved the win. It’s a shame to miss out by such a narrow margin but we’ll take the positives from this and now focus on Sunday’s feature race.”

This second-place finish was Jehan’s fifth from six rounds this season and 12th overall in Formula 2. It is also the fourth time this season that he has finished in the runner-up spot and keeps him third in the overall drivers’ standings. Jehan, a three-time Formula 2 winner, will get another shot at scoring a strong result on Sunday when he lines up for the longer Feature race ahead of the Azerbaijan Formula One Grand Prix.