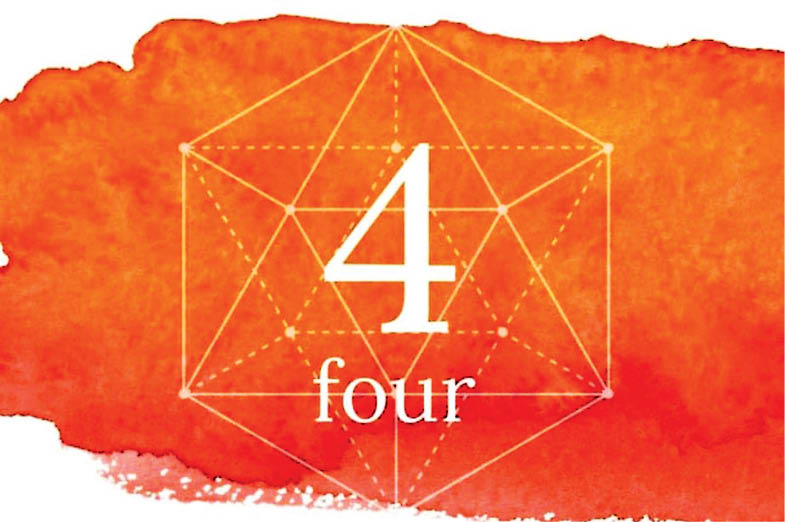 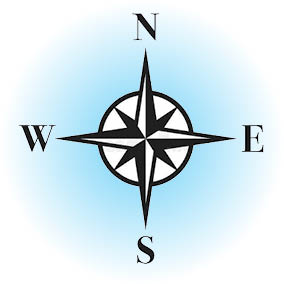 Number four is an auspicious number. In occult sciences, it is the number for healing the sick. In spiritualism, on a scale of one to seven, number four is the fulcrum, the stable point of rest between opposites. It is a state of perfect balance and harmony between ‘Life and Form’, i.e. consciousness and its manifested vehicle. It is the pause between spirit and matter. In this pause, there is stillness, equipoise and a germination of ideas and ideals.

The pantheon of Hindu deities have four hands, sometimes, holding the symbol for which they stand and are worshipped e.g. the ‘Trishul’ in the hand of Lord Shiva or the Goddess of wealth, pouring out a stream of coins, always from her fourth hand.

In the Universe, four stands for beauty and balance in nature. It is a very basic number e.g. the four seasons which inspired composer Vivaldi to produce the immortal piece of music bearing the same name, or the four directions of North, South, East and West.

In ancient India, there were the four  ‘Vedas’, the ‘Rigveda’, the ‘Atharavaveda’, the ‘Yujurveda’ and the ‘Samaveda’; the four castes or classes in which society was divided, viz. ‘Brahmins’, ‘Kshatriyas’, ‘Vaishnavas’ and ‘Shudras’; and four Ashrams or four stages in life, viz. ‘Gurukul Ashram’ – when one is a student under a Guru, ‘Grihastha Ashram’ – when one marries as a young adult and starts a family; ‘Vanaprastha Ashram’ – retiring into a forest (van) to let go the pleasures of youth and prepare for old age; and the ‘Sanyas Ashram’, where one  had to practice ‘Vairagya’ (to let go everything) and ‘Dhyaan’ (meditate on one’s real self or the ‘Sakshat Brahma Swaroop, also called ‘Atma-Swaroop’).

The essential characteristic of number four is b. Hence, if you were born on the fourth day of the fourth month or if this number is powerful in your horoscope, you will be capable of producing great works of art, as a painter, artist or author, but only if you nurture that creativity with hard work and dedication. The artist or creator must have mental equilibrium and mental stillness, without which no one can attain true vision or insight.

If you cannot see God in any creative or artistic work, then that art is lifeless. A classic example of this is seen in today’s journalism. In film-journalism, filthy half-true stories and semi-nude pictures sell a magazine like nothing else. Is this artistic? Is it creative? Is there anything sublime or God-like in this? Or is it an insult to the gift of writing that Saraswati Devi has bestowed on the writer? Also, if someone is hurt by that writing, it accumulates negative ‘karma’ which the writer has to repay, sometime in the future.

It is said in the ‘Law of Creation’ that only when an artist has found and entered the meditative state of equilibrium, where he sees God everywhere, will the fire of genius descend upon him in its full Pentecostal powers. We witness this in Meerabai’s bhajans to her ‘Girdhar’, Narsi Mehta’s songs to his beloved (Vahloji) Krishna, the works of Shakespeare and Chaucer, the pre-Raphaelite painters and every work of art which is done by a person who has experienced God-consciousness.

In theosophy, the number four is the manifestation of the ‘third aspect of the Blessed Trinity.’ The ancient Orphic religion whose number was four, had beauty as its keynote and used music and art in religious worship. God or the highest good was the principle of beauty in the universe and ugliness in any form was regarded as the evil.

An orator whose number is four, according to numerology, will possess the art of rhythmic speech capable of persuading, charming, captivating and swaying the audience. Most artists and creative persons have this number and they are extremely sensitive. They need harmony and peace of mind in their personal lives, or else, they can suffer great agony. Where there is no understanding, their self-expression suffers and they cannot reach greatness in spite of beauty, rhythm, perfection and allurement.

These gifted individuals whose dominating number is four, are susceptible to mental depressions, restlessness, conceit, jealousy for more gifted persons and often suffer from extreme alteration of moods, or what psychiatrists call mood-swings. They can be elevated to lofty exaltation one moment and cast down in despair the next. The greater the artist, the greater his enthusiasm and more deadly the rebound. These persons are spontaneous, passionate and emotional. They are difficult to live with because they are unbearable in times of frustration and failure to achieve perfect self-expression.

The lucky colour for persons dominated by this number is bronze. The lucky-stone is the Ruby and their symbol in ancient freemasonry was the square, which was always present along with compasses at the ancient Freemason Lodge of Abydos in Egypt, inside the pyramids. In the middle ages in Europe, of all the arts, the Opera represented number four, since it was a perfect synthesis, of various branches of art including drama, literature and music.

In one of our smaller Zoroastrian prayers, we pay homage to the powerful number four in the ‘Char Disha No Namaskar.‘ The esoteric meaning behind this prayer is homage to each and every creation of Ahura Mazda, bowing to all four directions, so as not to miss out on anyone. It also signifies unity in diversity, or in all the four directions, whatever is, it is by the grace of the one and only Ahura Mazda.