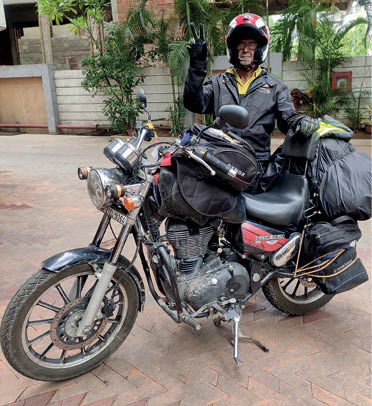 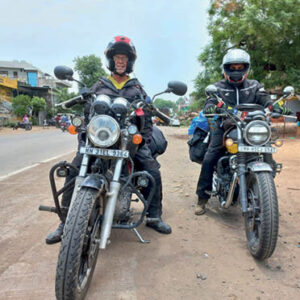 Nagpur resident, 72-year-old Fali Buxy has proven that age is indeed just a number. His undying spirit of adventure and enthusiasm to live his best life recently saw this spirited septuagenarian complete his second motorcycle ride to Leh and Ladakh! 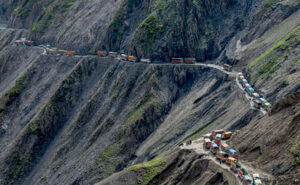 oad trips were primarily in cars, he became passionate about traveling on two-wheelers when, at the age of 64, he finally ticked this box off his wish list and bought the Enfield Thunderbird. In 2014, he took his first trip to Ladakh on the new motorbike.

Speaking to Parsi Times, Fali Buxy says, “After my first trip to Leh in 2014, I had decided to make one more trip to this place. Well, due to the pandemic it got postponed. So, after waiting for a while, at the age of 71, I finally did it! It was pretty difficult and I encountered some breathing problems too, but I know I just had to do it.”

Fali Buxy made this trip with fellow rider, Parag More, who is nearly half his age, but who equally shares his passion for road-trips on motorcycles. Which is why Parag immediately took up Fali’s invitation to join him on the road trip to Leh-Ladakh, despite having done so in the past. After two months of meticulous preparation – planning charting routes, checking weather forecasts, packing, obtaining the requisite permits et al – they were on their way upon their motorcycles – Fali on his Enfield and Parag on his Honda H’ness

It turned out to be an exhilarating 20 day-trip, which saw them ride through Gwalior, Panipat, Jalandhar, Pathankot, Srinagar, Sonmarg, Dras, Kargil, Batalik and finally to Leh – an enriching adventure that left their spirits satiated. The most difficult parts of the journey comprised getting through the three passes – Khardungla Pass, Changla Pass and Zojila Pass. These dangerous passes had huge cliffs on one side and deep valleys on the other; the slightest skid of the tire could have you hurling into the deep gorge. Manoeuvring these passes called for great skills, stamina and mental focus resolve.

The black snow also posed challenges on the unaccommodating narrow and gravelly paths. There were times when the incessant snowfall would bring down the temperatures to a chilling minus-20 degrees Centigrade! Couple that with lack of proper nourishment, with just Maggi and aloo parathas not providing sufficient fuel for the body to combat the cold and cross 100 odd kilometres of the difficult terrain, daily!

But despite all these challenges, in addition to the thrills of adventure, for Fali, the dangers are worth way more than days of comfort and ease, because these trips help put so many things into perspective. “The best thing about such trips is that you get to meet like-minded people en route. We came across bikers from all parts of the country and were pleasantly surprised to see so many lady riders too – some on motorcycles, a few on scooters and there was one guy travelling across the country on his bicycle! But, on both my trips, I didn’t meet any fellow Parsis riding to Leh. Us Parsi riders should be more enthusiastic about this ride, it’s the ultimate in riding. It tests you and your bike! However, the camaraderie between bikers is to be seen to be believed. Everyone is always ready to lend a helping hand, even without being asked if a biker is seen in some difficulty. It’s an amazing show of solidarity!” shares Fali.

Even as Fali is yet to decide upon his next trip, he claims to be the only septuagenarian to have travelled on a motorcycle from Nagpur to Ladakh and back. Sharing inspiring and insightful words of wisdom, he concludes, “Age is just a number. Live your life, forget your age. We are never too old to set new goals or dream new dreams. Riding is my passion. When the wind caresses your face, when the landscape embraces you as you ride over mountains and jungles, across terrains not well-trodden, you feel the real rush of adrenalin and you revel in absolute freedom, transforming these journeys into memories of a lifetime. We ride not to escape life, but for life not to escape us!”