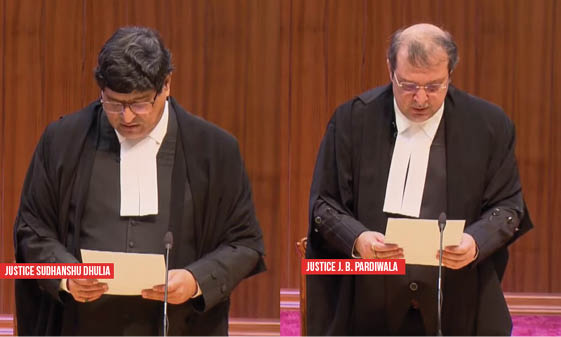 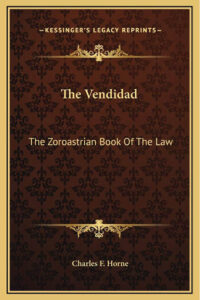 “Before we lose the word

That bids new worlds to birth,

Need must we loosen first the sword

Of Justice upon earth!”


Parsi contribution to the field of Law in India has been tremendous. Over the years, our tiny community has produced iconic legal luminaries, from Kharshedji Bhabha, Jamshedji Kanga, Hormusji Seervai, Nani Palkhivala, Soli Sorabji to Fali Nariman, Rohinton Nariman and many others. Recently, Justice Jamshed Burjor Pardiwala of the Gujarat High Court was elevated as a Supreme Court Judge – other Parsis to be appointed to this high office include Justice Dinshaw Madon, Justice Sam Bharucha, Justice Sarosh Kapadia (who later became Chief Justice) and Justice Rohinton Nariman. It is possible that in the future, Justice Jamshed Pardiwala may become the second Parsi Chief Justice of the Supreme Court of India. This article is a tribute to the original law givers of Ancient Iran and it is written with the hope that it may inspire more Parsis to take up the study and practise of law…

Law As Protector For All: Laws are essentially rules and regulations that bind all people in a country or community. Laws protect general safety and ensure rights of all citizens. However, there is ‘Rule of Law’ and there is ‘Rule by law’. The former is positive while the latter is negative.

‘Rule of law’ means all laws apply equally to all and no one can be above the law. Any crime or violation of law has a specific punishment as well as a process through which the guilt of the person has to be established. However, ‘Rule by law’ is misuse of law as a tool of political repression and enforcing it unequally with a different set of rules favouring a few sections of the society.

Law of the Medes and Persians: Over two and half millennia ago, ‘Rule of law’ was referred to as ‘The law of the Medes and Persians’, denoting something which cannot be altered. Reference to this phrase can be found in the ‘Book of Daniel’, Chapter VI. According to this text, Darius the Great had a lot of regard for Daniel who was a very devout Jew and elevated him to a high office. However, this gesture made some courtiers very jealous and insecure. They conspired to make the king issue a decree that anyone who, during the next thirty days, pays homage to any divinity or human being except to the King, shall be thrown into the lions’ den.

Daniel continued to pray to his God and Darius was forced by his own decree and unalterable nature of law, to throw Daniel into the lions’ den. But God shuts the mouths of the lions and the next morning Darius was delighted to find Daniel unharmed. The king then decreed that the conspirators should be thrown in the Lion’s den where they all perished and justice was not done but seen to be done.

Persian Lawgivers: Australian archaeologist  William Culican observes that the “Laws of the Medes and Persians” became a by-word of judicial incorruptibility and harshness, throughout the subject lands. It was the Zoroastrians who gave the world legal principles enshrined in the law of evidence and procedure. Legal concepts like arbitration, release on bail and representation by a lawyer as also power of attorney and execution of wills are of Persian origin, later picked up by the Greeks and Romans.

Even the concept of issuing a passport is a Persian innovation. Reportedly, one of the earliest references to passports is found in the Biblical book of Nehemiah, circa 450 BC. Nehemiah, an official serving King Artaxerxes I of Persia, had requested leave to travel to Judea. The king gave a letter addressed ‘to the governors beyond the river’, requesting a safe passage.

In an age seeped in cruelty, slavery and the law of ‘might is right’, Cyrus the Great gave humanity the first Charter of Human Rights, declaring, among other rights and freedom, man’s right to freedom of religion, opinion, expression, trade and free movement. In recognition of Zoroastrian contribution to the development of law, a statue of Zarathushtra stands in the Court of the Appellate Division (near Madison Square and 23rd Street) with other lawgivers like Moses, Manu, Charlemagne and Alfred the Great.

Law And Religion: In Pahlavi or Middle Persian, the term ‘Dat’ or ‘Dad’ means both law and religion. The dynasty in which the legendary Shah Jamsheed ruled was known as ‘Peshdad’ or the first (Pesh) to give the law (dad) or religious code of life and living. Similarly, the Vendidad is the book of religious laws against demonic forces. The Pahlav Dinkard defines dad as ‘the beneficent regulating principle of Mazdayasni religion’, the ‘understanding of which is through wisdom’. But wisdom, in its turn, ‘is the principle of dad’. It comes as no surprise, therefore, that Zoroastrianism is referred to as ‘Dad-e-Ohrmazd’ or the law or religion of Ohrmazd.

The Iranians were a free people, and although their Sovereign had great powers and privileges, he could not misuse them with impunity. The Grand Senate, in which the Nobles, the Prelates, the Grand Marshals and the Imperial Ministers and Secretaries sat, was always a power which the Great King respected and had constantly to consult.

The Magistan or the Imperial Parliament of the Arsacides or Parthians, appears to have continued even under the Sasanian empire in some form, for besides the Grand Senate, the great Popular Assembly is referred to more than once in the graphic descriptions of events in the Shah Nama which notes that Iran’s Parliament used to assemble in the Palace of Gulshan-i-Shadagan or ‘Paradise of the Blest’.

The Right Of A Commoner: Not only was the Great King dependent on the vote of the Grand Senate and the Popular Assembly for confirmation on the royal throne, but he was likewise responsible to them for good governance and liable to be tried and deposed by them if he failed in that supreme function. While the king was made independent of the common law and its courts, he was not free from duties that he was required to fulfil towards the State and towards the people as a law-abiding Sovereign.

What is still more astonishing is that when the Great King granted public audience in the open to all his subjects on the festival days of Nowruz and Mihrigan, the humblest members of the population had the privilege to present to the King himself petitions and complaints which could be against the highest personages in the Empire, including the Sovereign himself. Both by law and by disposition the King was most solicitous to see that no was obstructed in doing so, and a herald would pronounce the direst consequences to anyone attempting such obstruction.

Courts Of Justice: Under Sasanian Kings there were courts of justice throughout the Empire and in every district, town and city, to render justice easily and prompt for the litigants and the wronged persons. The Supreme Court of Justice was that of the Sovereign himself aided by the Chief Judge of the Empire. In the Roman Empire the judge was not always well versed in law and hence in such cases individuals who knew law were appointed to help the judges. However, in ancient Zoroastrian Iran, judges and magistrates had to personally know the law perfectly.

Lawyers too were regularly employed in ancient Iranian courts. Their appointment had to be formally recognized by the court and fees that lawyers charged had to be reasonable. A lawyer who charged his client excessively could be fined by the court. For the ancient Persians, Justice was the constant and perpetual will to allot to every man and women, royal or commoner, his or her rightful due and at the roots of this justice system was the core of Asho Zarathustra’s message of Asha – variously translated as truth, righteous conduct and Divine Order!