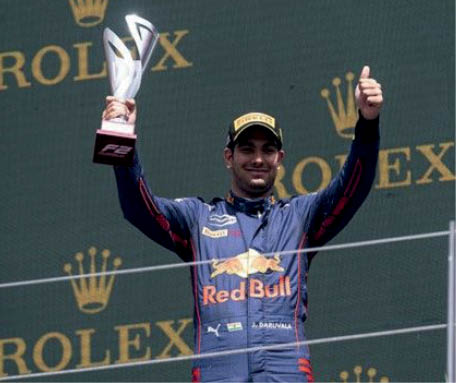 On 10th July, 2022, our 23-year-old racing sensation, Mumbai-based Jehan Daruvala, put in a stirring drive moving from 11th to 2nd place in the Formula 2 feature race in Austria, held on 10th July, 2022, at Spielberg, Austria, but was robbed of his sixth podium of the season, by a post-race penalty.

Jehan had finished a provisional second after an inspired strategy call to start the race on slick tyres on a damp track and searing pace from the Red Bull-backed racer in the tricky conditions saw him make rapid progress up the field. But a 20-second time penalty, handed out after stewards deemed the Prema Racing team had attempted to dry the track surface at Jehan’s grid spot, negated his brilliant run. The penalty was more so disappointing, as Jehan was briefly in with a chance of inheriting the race win after provisional winner, Richard Verschoor, was disqualified for a fuel irregularity.

Jehan said, “I’m absolutely gutted. All season, luck has been against us and just when I thought things were finally going our way, we get hit with a penalty. We did everything right today. I was expecting a tough race from 11th on the grid and, while it was tricky, we read the conditions perfectly today. The team made the right strategy call on the tyres and I was able to maximise it with my pace in the wet. It’s difficult to find the positives after having a result we fought hard for, taken away from us in this fashion. We could have taken big points off our rivals today, but I can still take encouragement from my pace today. We now have a weekend off before the next run of back-to-back races and it’s now full focus on Paul Ricard and Budapest. We just need to keep pushing and I’m sure our day will come.”

Jehan’s pace in the changing conditions was formidable. He built up a sizeable gap and then timed his one and only pitstop to perfection, coming in on lap 13. The penalty in Austria was the latest in a series of misfortunes on 10th July, that have cost Jehan a strong result in feature races this season. An ill-timed safety car cost him a potential victory in Imola. In Barcelona, an electrical problem side-lined Jehan on the fourth lap, just when he was ideally placed to benefit from running the alternative strategy.