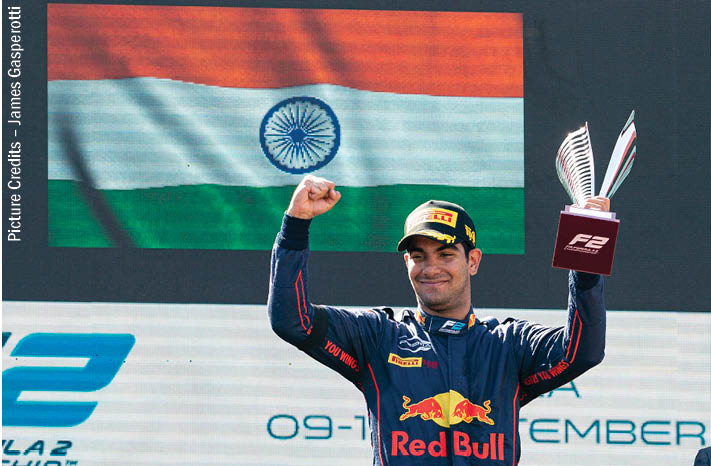 On 11th September, 2022, the toast of the community’s and India’s racing champ – Jehan Daruvala, raced to his fourth Formula 2 win in the Championship’s main Feature race at Italy’s Monza race track.

The 23-year-old started sixth on the grid but used a mix of strategy, race craft and tyre management to capitalise on a safety car and red flag-interrupted race and clinch a comfortable win around the hallowed ‘Temple of Speed’.

The win was Jehan’s first this season. It comes after the Red Bull-backed racer went from fifth to third in the Sprint race, a day earlier, making it two podiums from two races for Jehan on the weekend and eighth, in 2022. It was also his sixth top-three finish at Monza and second win at the track after his win there, last year.

“What a weekend,” said Jehan. “It’s been a long time coming. “We’ve had the win taken away from us for one reason or another on more than one occasion this year. But we’ve kept our heads down, kept believing, kept pushing and we’ve finally done it. And what a venue to do it at too! Monza is up there with one of my all-time favourite tracks and standing on the top step of this incredible podium, out over the main straight with the Indian national anthem playing out, feels so, so special.”

Jehan will now be heading to Abu Dhabi for the season-finale. ““The Yas Marina track is another venue I like and I won there last year. So going there on the back of a weekend like this one gives us a major boost,” added Jehan.

The Formula 2 championship, which acts as a support series for Formula One, will have the chance for a bit of a break as F1 embarks on its Asian and American swing. The championship will return for its last and final round of the season on the weekend dated November 18 – 20, 2022, alongside the Formula One season-ending Abu Dhabi Grand Prix.