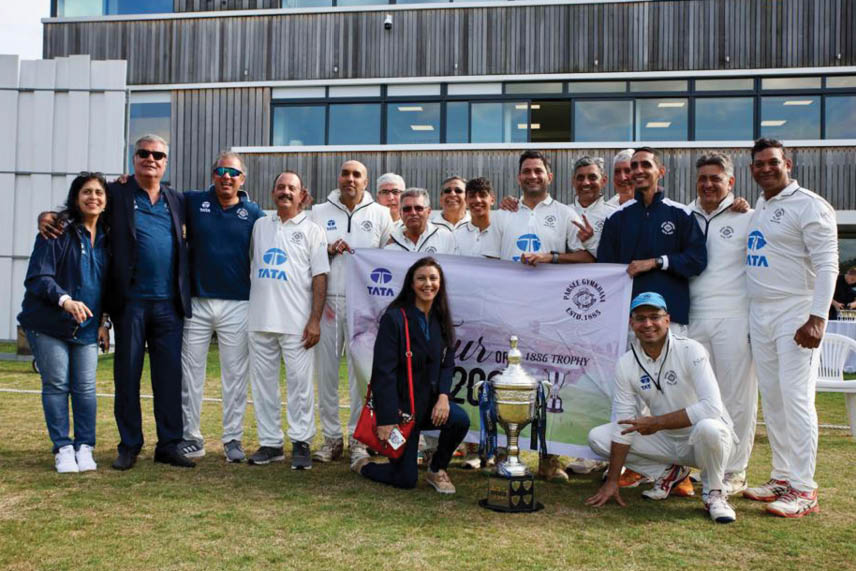 Parsis have been the pioneers of Indian cricket since 1886, paving the path for future generations to follow. Keeping that flag fluttering high, Team Parsee Gymkhana (PG) proved its ability yet again, in August 2022, retaining the Historic 1886 Trophy, in their tour of the UK. As part of the winning PG 1886 Trophy team at Guilford (Surrey, UK), Parsi Times Sports Correspondent – Binaisha M. Surti, brings you exclusive highlights of the team’s victorious tour.

The original 1886 tour between the Parsis and the English was noteworthy as the first ever team from India to tour England, comprising an all-Parsi team! Our Parsi Team, led by Dr. Dhunjeeshaw Patel, had never played international cricket, while England had played seven series against Australia by then. After a three-week sea voyage, the Parsi team played their very first match of the tour at Sheffield, with a total of 28 matches played, 19 lost, 8 draw and only 1 game won, against Normanhurst in a 1-Day, limited-overs fixture.

Cut to 2016 – English businessman and cricket enthusiast Matt Greenwell met Khodadad Yazdegardi, PG’s dynamic Vice President and Cricket Secretary; and MCA Apex Council Member for a friendly match in Mumbai. Seeing the archival images of the original 1886 team of Parsis that toured England, Khodadad birthed the idea to honour them by recreating and celebrating those golden cricketing by establishing the 1886 Trophy.

The then secretary of Surrey CC – Charles Alcock, hosted the Parsi team of 1886. Hence, the English team later played as ‘Charles Alcock X1’. Revisiting history, the first edition played on 12th November, 2016, was won by the Team PG, while the English won the second edition. The third edition of the 1886 Trophy was played at the iconic Kia Oval, in England, the Parsee Gym tour of UK – 2019, where Team PG created history, 133 years later, winning by a huge margin of 68 runs. Today, the Parsi team of 1886 have found an eminent place in Marylebone Cricket Club (MCC) Lord’s Father Time Wall, showcasing the Home of Cricket’s 100 Greatest Milestones! 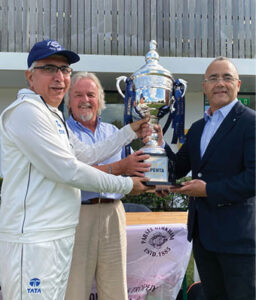 136 years later, today, the PG cricket team comprising only Zoroastrians, toured the UK, from 11th– 25th August, 2022, sponsored by Tata Sons, Shapoorji Pallonji and other well-wishers. PG’s tour kicked off with a visit to the iconic Trent Bridge, Nottingham. This ground is indeed special as the pioneering Parsi cricketers touring England played a game at Trent Bridge V/s ‘The Gentlemen of Nottinghamshire’ on 12-13th July, 1886. We visited the pavilion, main ground with a stunning view of the stadium, the dining Long Room, where we got to witness bats dating back to the 1880’s standing tall – belonging to cricket greats like WG Grace, Jack Hobbs, Victor Trumper, etc.

PG then faced ‘The Forty Club, East Midlands at the Plumtree Cricket Club, Nottingham, founded in 1815, which is one of the oldest clubs in En1 gland. Batting first, PG scored 182-6 in their 30 overs. Skipper Maneck Daruwala scored a brilliant 52, not out. Kersi Pavri too played a gritty knock of 57, not out. In reply, the Forty Club finished with 184-3 in 25.3 overs. Khushru Irani snapped two wickets while stalwart Vispy Mehta picked one.

On 14th August 2022, PG played against Stroud Cricket Club in Gloucestershire, one of England’s most picturesque cricketing grounds. Chairman of Stroud Cricket Club, James Collins graced the occasion and also played cricket. Batting first, PG scored 193-5 in 25 overs, thanks to opening batsman Maneck’s 73 not out and skipper Kersi Pavri’s outstanding 72. In reply, Stroud CC scored 194-8 in 23.2 overs, led by skipper Vivek Menon. The match went down to the wire, but E. Gegg’s masterclass 127 ensured Stroud a win. For PG, King of Swing – Vispy snapped up a brilliant four wicket haul while Khushru picked three wickets.

Team PG next played Chiswick Cricket Club, in West London on 18th August. Batting first, PG scored a match winning 184-4 in 20 overs. Opener Shahen Mistry played a scintillating knock of 72 not out. The opposition perished at 163-6 in 20 overs as PG won by 21 runs. For PG, Zenhar Marolia, Mehernosh Chhor, Kersi and Khushru took one wicket each. 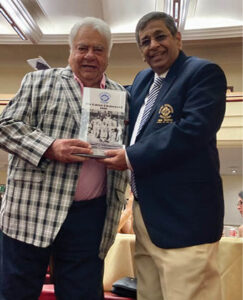 Post the official welcome, with a breakfast and match day briefing, team pictures were taken. David Pakeman, President, Surrey County Cricket Club was delighted to have been a part of the match. Former India legendary cricketer, aapro Farokh Engineer graced the occasion to support PG. Also present were the charming and popular Zerbanoo Gifford and her husband, Richard Gifford, Dr. Dasturji Jamasp JamaspAsa, Dasturji of Anjuman Atash Behram and Chairman of a Cricket Club in Kent, regularly playing on weekends as a top order batsman along with his sister, Dr. Shirin. Talented wicketkeeper batsman, youngster Kayan Ranina was given his PG cap by former Cricket Commentator, Senior Advocate, High Court and member of team PG – Fredun De Vitre!

On a chilly morning after being put into bat first, PG managed 135-9 in their 30 overs. At 111-9, Burzin Mehta and Mehernosh Chhor added a valuable partnership of 24 runs for the last wicket, which proved to be significant for Team PG’s win. McLean picked 4-22 in 6 overs. Star bowler of PG, Vispy started with a bang and had the Alcocks struggling at 84-5 in 18.5 overs. The father-son duo – Burzin and Vispy, made valuable contributions as did Wicketkeeper Kayan. Khushru spun a brilliant 4 for 7, in 6 overs. Needing 16 off the last 6 deliveries, Reshad Dotivala held his nerve when it mattered most, well led by captain cool Maneck, and PG won a nail-biting contest, under Surrey umpires Jeremy Beckwith and Terry Teeman, and Guilford scorer – Martin Moncgomery.

On 22nd August, Team PG visited the UK Parliament, thanks to Rohan Subbarao and Omaar Singh. They were given a tour of the Westminster Hall, House of Lords and House of Commons Chambers and the Royal Gallery.

The victory of 1886 Trophy will yet again be cherished in perpetuity. PG extends gratitude for the exceptional hospitality. Kudos to Team PG for giving their hundred per cent on the field every single time, with each member contributing individually and as a team player. The team finished the tour on a proud and thrilling note of victory and now look forward to welcoming and hosting the Alcock’s in India in 2023. Three Cheers for team PG!