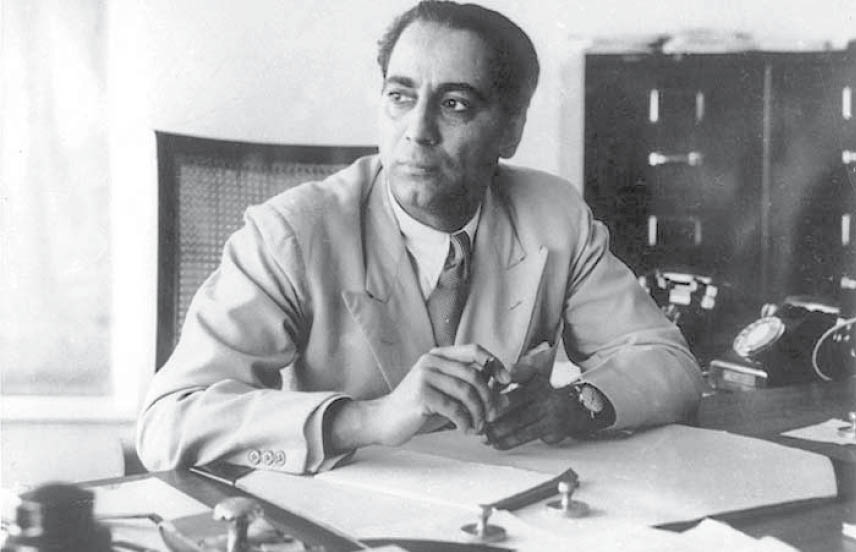 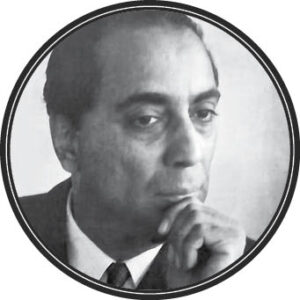 30th October marks the birth anniversary of the legendary physicist Homi Jehangir Bhabha, also revered as ‘The Father of Indian Nuclear Program’ known for his path-breaking contributions to Quantum Theory and Cosmic Radiation. He was the first Chairman of The Atomic Energy Commission of India as well as the Founding Director and Professor of Physics at the Tata Institute of Fundamental Research (TIFR). He was also a dedicated architect and a philanthropist.

He dreamt of India gaining self-reliance through progress in the field of nuclear power. Thanks to his experiments and tireless efforts, India emerged as one of the most important nuclear powers of the contemporary world.

Homi Jehangir Bhabha was born on 30th October, 1909, to an aristocratic family – Jehangir Hormusji Bhabha and Meherbai Bhabha. His father was a known lawyer while his mother was a the daughter of Bhikaji Framji Pandey and granddaughter of the renowned philanthropist, Dinshaw Petit of Bombay. Named after his paternal grandfather, Hormusji Bhabha, Inspector General of Education in Mysore, Homi attended Cathedral School, post which he joined Elphinstone College at the age of fifteen. He passed the Senior Cambridge Examination at the age of sixteen and went to Cambridge to attain a degree in Mechanical Engineering, at Gonville and Caius College. He then began research at the Cavendish Laboratories in Cambridge and his first paper was published in 1933. Two years later, he received his Ph.D. and stayed in Cambridge until 1939.

When the second World War broke in Europe, Bhabha returned to India in 1939 and this proved to be a landmark in his career and more so, for India in the development of science. He started his career with the Indian Institute of Sciences, Bangalore, as a Reader in Physics on the behest of Nobel laureate, C V Raman, who headed the Physics department in the institute, at the time. In 1942, Bhabha was elected as a member of the Royal Society, and later as a Fellow of the Indian Academy of Sciences. In 1943, he was appointed as the President of the Physics section of the Indian Science Congress. 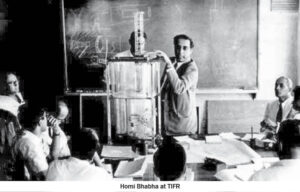 He convinced many senior leaders of the Congress Party to start an ambitious nuclear programme. As part of his vision, he first established the Cosmic Ray Research Unit at the Institute and later the Tata Institute of Fundamental Research (TIFR) in Bombay, in 1945, with financial help from JRD Tata. In 1948, he set up the Atomic Energy Commission and served as its first Chairperson. The same year, he was appointed by Jawaharlal Nehru as the Director of the Nuclear Program and was tasked to develop nuclear weapons. In 1950, he represented India in IAEA conferences and served as President of the United Nations Conference on the Peaceful Uses of Atomic Energy in Geneva, Switzerland in 1955. From 1960 to 1963, he served as the President of the International Union of Pure and Applied Physics.

He rose to international prominence after deriving a correct expression for the probability of scattering positrons by electrons, a process now known as ‘Bhabha Scattering’. Widely known as the Father of the Indian Nuclear Programme, Homi Bhabha formulated a strategy and focussed on extracting power from India’s vast thorium reserves rather than its uranium reserves. The theory proposed by him became India’s three-stage nuclear power programme.

Homi Bhabha received numerous national and global rewards from Universities and was an associate of various societies of science, including the American National Academy of Sciences. Homi Bhabha received the Adams Prize from the University of Cambridge in 1942, and the Padma Bhushan, the third-highest civilian award, from the Government of India, in 1954. He was also nominated for the Nobel Prize for Physics in 1951 and 1953 –1956.

It is said his love for science didn’t leave much scope to accommodate a marriage, and Bhabha remained a bachelor during his life. Once, when he was asked about his marriage, he answered, “I am married to creativity!” It was due to his excellent groundwork done and right direction given in the field that India was able to perform its first atomic explosion in May 1974 at Pokhran in Rajsthan, and join the galaxy of nuclear power nations, becoming the sixth in the series.

Dr. Bhabha was an astute scientist and committed engineer, a dedicated architect, a meticulous planner and a perfect executive. An ardent follower of fine arts and music, he was a philanthropist too. His hobbies included painting, classical music and opera, and botany. In the words of the great physicist, Sir C V Raman, Bhabha was a great lover of music, a gifted artist, a brilliant engineer and an outstanding scientist.

Homi Bhabha died in mysterious circumstances, aged 56, when Air India Flight 101 crashed on January 24, 1966, near Mont Blanc, Switzerland, where he was headed to attend an international conference. Many assassination theories surfaced post his death.

Homi Bhabha’s Legacy: After his passing, the Atomic Energy Establishment in Mumbai was renamed the Bhabha Atomic Research Centre in his honour. A radio telescope in India’s Ooty was his initiative which became a reality in 1970. Homi Bhabha National Institute, an Indian deemed university, and the Homi Bhabha Centre for Science Education in Mumbai are the noted institutions in his name.