Zoom.us is a wonderful tool for conducting meetings, web and video conferences. The online meetings which can be conducted in HD video and high quality audio, can handle upto 500 video participants and can have screen sharing and full suite of collaboration features. Zoom training sessions can have Co-annotation and white boarding, Video breakout rooms, MP4 and […]

. Faith is the belief in the unknown, as belief is the faith in the known. Faith soars the highest heaven and dives to the deepest depth. Faith knows no bound and breaks through all barriers. Faith reads the secrets of the earth and deciphers the mysteries of heaven. Faith knows all and sees all. […] 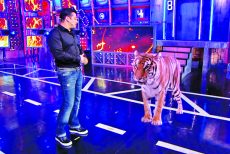 Calling all our readers to caption this picture! The wittiest caption will win a fabulous prize! Send in your captions at mail.parsitimes@gmail.com by 1st November, 2017.

The etymology of the word ‘religion’ comes from the Latin root word ‘religare’ which means to unite or to join. To join or unite what? Obviously, Man with God and more importantly, man with man. Has any religion in world history managed to do that? In fact, most wars have been fought in the name […]

CST: Chhatrapati Shivaji Terminus (CST), formerly called Victoria Terminus (VT), is a UNESCO Heritage Site, built by British architect, FW Stevens, in 1888, during the British Raj. It’s an outstanding example of Victorian Gothic Revival architecture. The entrance of VT carry two columns, one with a lion (representing Great Britain) and the other with a […]

Consultant to the Tata group of companies for re-engineering and optimising their supply chain in various group companies, Zubin Poonawalla was recently awarded the ‘Indian Cargo Award’ by Durga Das Publications Private Limited, at an event organised in Ahmedabad on 14th October, 2017. Felicitated as the ‘Upcoming Professional of the Year 2017’, Zubin was recognised […]

Re: BPP CONNECT It is indeed interesting and good approach by our BPP to update the community about their performance through ‘BPP CONNECT’ published in the Parsi Times. It is good governance and gives transparency in their activities. While going through the information provided by BPP in Parsi Times dated October 7, 2017, I have […]

The BD Petit Parsee General Hospital (PGH) has signed an agreement with the Medanta Group (The Medicity, Gurgaon), on 25th October, 2017, to equip, operate and manage a separate new cosmopolitan hospital, that will be set up in the premises of Parsee General hospital. Medanta will pay an annuity as well as a percentage of […]

Women Entrepreneurs (WE) Wing of the World Zarathusti Chamber of Commerce (WZCC) organised a workshop on ‘Transforming Your Life With Source-Full Intelligence’ on 14th October, 2017, at Indian Merchants’ Chambers (IMC). The event commenced with Chairperson, WE, Homai Mehta delivering a welcome address, followed by Behroze Daruwalla introducing the convener of the World Zoroastrian Congress […]