Over 180 children participated in the week-long XYZ summer camp, across its centers in Colaba, Byculla, Dadar and Andheri. Day-1 kicked off the camp with a Humbandagi (a lovely practice marking the start of each day), and parents and children ‘twinning’ it up for the day in terms of dressing, playing fun games and bonding […] 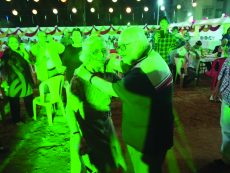 Age, it seems, is neither a barrier nor a deterrent for shaking a leg or exchanging a kiss with your long-time life partner. This was evident when London-based Adi Mistry (all of 91) and wife Gool, 85, who come down to Cama Park every winter, trudged along to the dance floor to win the […]

The Cama Park Welfare Association, Andheri, held the second edition of the All Parsees Table Tennis Tournament at the Cama Athornan premises, on 3rd and 4th February, 2018, with participants aged 8 to 76 years, pouring in large numbers from Mumbai, Thane, Navsari and Surat. The competitors battled it out in various categories, including the […]

Four Bungalows Four Bungalows, in suburban Mumbai is a neighbourhood named after the ‘four bungalows’ that once existed there during the British occupation. Located three kilometres from Andheri station, in the vicinity of Lokhandwala Complex, it is popular as one of the most systematic and well-organized hub for shopping. The two main sites here are […]

Walking Tall At 100 – Homi R Mehta PT Special Correspondent Hoshang K Katrak Reports There’s something magical and truly incredible about people reaching their 100th milestone. Indeed those who hit a century have luck and God by their side – like Homi Rustomjee Mehta, the ‘young’ man from Cama Park, born on 23rd June, […]

Cama Park, Andheri organized All-Parsee box-cricket (underarm) tournament on 13th and 14th May, 2017, with 13 teams participating across Mumbai. This six-a-side, five-over contest witnessed engrossing knock-out stages. In the first semi-final, with the scores tied, Malcolm Baug and CJ witnessed a super-over. The heroic efforts of Shavir Afshai of Malcolm Baug managed to take […]