The 16th East Bombay Scout Group, under the arch of the Young Zoroastrian Society (YZS) entered its 100th year on 1st August, 2019, alongside sister group, the 71st East Bombay Guide Company (also under YZS) which completed 25 years on 1st August, 2018, and was also celebrated with much pomp. The 16th and 71st Scout […] 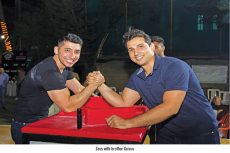 Being Parsi is so much about tradition and legacy, across all areas – be it food, career or sport. Keeping alive this very essence of family-cum-community legacy, Zeus Zend, takes after his veteran and legendary grandfather – Zend Merwan Zend – to continue making headlines in the sport of Arm Wrestling, which still continues to […]