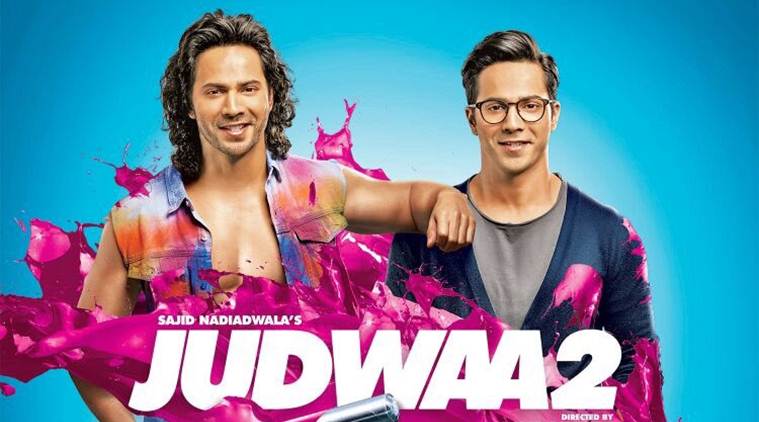 For those of the Manmohan Desai generation, the novelty  — if one can call it that — soon turns to deja vu. The premise is decades old and time-tested: twins (of course both with contrasting personalities) getting separated at childbirth, their girlfriends getting into a quandary, and in the second half catching up with each other after the familiar villains’ routines.

Judwaa-2 reprises the two-decade-old Judwaa with the director’s son Varun Dhawan stepping into Salman Khan’s roles of Raja (a Ganpati devotee and the effusive one) and Prem (the guileless one). After the conjoined twins are separated — courtesy villain Charles (Zakir Hussain) with a standard dialogue “you screw me, I screw you”— Prem the naive music student moves to London with parents. Raja, the garrulous one, is raised in the Versova fishing community. The initial pairing of Prem with Samara (Taapsee Pannu played in the original by Rambha) and Raja with Alishka (Jacqueline Fernández — Karisma Kapoor in the original) soon turns into a mix-n-match before the ending reunites them with their original beaus.
The other villains in the film — and we aren’t  talking about David Dhawan here — is, besides Charles, his son Alex (a none-too-impressive role by Vivan Bhatena).
Varun Dhawan’s first double-role turns out to be a personal success —though not necessarily for the film. Jacqueline with her pearly whites and Taapsee are largely ornamental  (their outfits are naturally economically designed), the latter being a dismal mitfit in this film. The talented Pavan Malhotra as the UK cop Dhillon hams it up — though it’s only the script to be blamed. The only notable performances come from Raja’s lisping sidekick Nandu (Rajpal Yadav—played in the original by Shakti Kapoor), Dr. Lulla (Ali Asgar) and Pappu Passport (cameo by Johnny Lever). The rest of the supporting cast are passable.
Two of the four songs are reprised from the original—Chalti hai kya 9 se 12 and Oonchi hai building. Some of the jokes amd puns (dialogues by Sajid-Farhad) evoke laughter, possibly the only saving grace in the film. Also, a certain bhai’s entry at the fag end of the movie is bound to arouse interest amongst his fans.
If you can stand the pelvic-thrusting gyrations, absorb the constant heavy lisping of Rajpal Yadav (‘dosti tod di’ sounding as ‘dhoti khol di’), Raja’s one-man-army heroics, hekmetless riding in London and remember to leave your brains back home, Judwaa 2 may just  turn out to be a one-time watch.