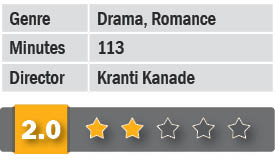 Exponential, experimental and surreal are the three apt adjectives to describe a film of the unslottable genre – CRD. Set against the backdrop  of the Purushottam inter-collegiate drama festival  (a real-life event in Pune), CRD is a film one could watch again and again or simply wish it away,  depending on your penchant for theatre.

The story could be summed up thus – Chetan (Saurabh Saraswat), an aspiring playwright, auditions to represent his college in the competition. The faculty in charge, Mayank (Vinay Sharma) has his own inscrutable ‘method acting’ to extract optimum performances from his troupe, which includes crudely caressing his lady protagonist Persis (Mrinmayee Godbole) – inconceivably named, as even the one sentence she utters in Gujarati is bizarrely enunciated! The rebel in Chetan forces him to stage his own play, leading to a personal and professional confrontation with his mentor.

Director Kranti Kanade, who’s done stints at UCLA and FTII, has tweaked the rules of Indian cinema-making, the love-making scenes included. With unstinted support from cinematographer Daniel Katz and a background score by Garth Neustadter, CRD is a film not easy to fathom especially with its insane humour and dark overtones.

Kanade succeeds in building up a climax – interspersing and cross-cutting scenes – blurring the lines between real-life and reel-life. In an otherwise non-commercial film, references to Amitabh’s ‘Deewar’ are interpolated (though the year mentioned is incorrect). Class Room Drama is what I would say the initials stand for – in the absence of any explanation from the filmmakers for the title’s initials – though, in all probability it stands for the main protagonist Chetan Ranjit Deshmukh. If I wasn’t viewing it on the big screen, I would have easily mistook it for watching a play in NCPA Experimental Theatre.