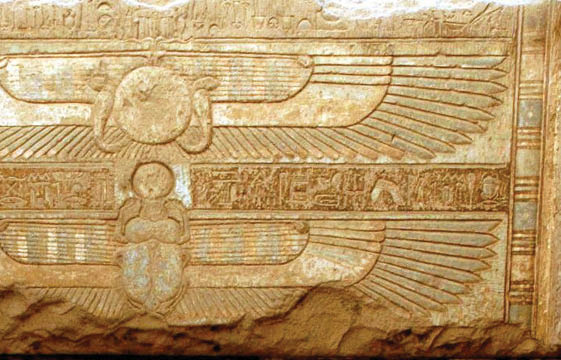 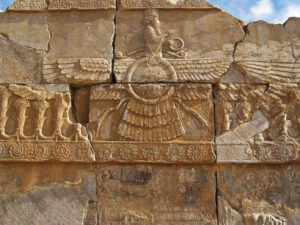 Zoroastrians seem to have adopted the Fravahar or Farohar (often pre-fixed with the term Asho which means pure) as a symbol of the Zoroastrian religion. However, is it really a Zoroastrian religious symbol? What does it represent? What is the origin of this symbol? These and several other questions require deeper introspection.

Is it a Zoroastrian symbol? In the history of ancient Iran, the winged human-head figure appears to have been used only during the Achaemenian dynasty. Neither the Parthians nor the Sasanians who later ruled over Iran used this symbol. During the Sasanian dynasty, Zoroastrianism was the State Religion of Iran. However, this symbol was not used by the Sasanians. 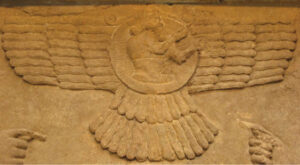 Darius the Great appears to have used it for the first time on his rock relief at Mount Behistun. The head is seen facing left and the wings are rectangular, not curved. A later enlarged depiction at Persepolis is more stylish with curved wings and the head facing right. This motif can also be seen on the outer façade of the Astodan of all the Achaemenian Kings who were laid to rest at Naqsh-e-Rustom and at Kuh-e-Rehmat (mountain of mercy), above Persepolis.

Even Parsis in India did not use it as a symbol till the ruins of Persepolis were discovered and excavated in the early twentieth century, and the community took a liking for this symbol. Thus, the winged human-head motif gained or re-gained popularity in India and Iran only around a century ago.

Pre-Iranian Roots: The symbol of the winged disk (i.e. without the human head) represents the sun, and long before the Achaemenians, it was associated with divinity, royalty and power in Egypt, Mesopotamia and Anatolia. It appears to have originated in ancient Egypt and due to its associations with the sun; the Winged Sun was linked to the sun god Ra in ancient Egypt. However, it’s most common association was with Horus, the falcon god.

The Achaemenian kings ruled Egypt and they could have borrowed this Egyptian symbol of power and royalty, albeit with their own styling adaptation. However, it’s more likely that the Achaemenians borrowed it from Assyria. The Assyrian winged sun emblem, originally found at the North-West Palace of Nimrud in Nineveh (upper Mesopotamia), has a human head inside the disk. Archeologists speculate that this iconography later gave rise to symbol used by Darius the Great, around 520 BC.

What Does The Iranian Winged Figure Symbolize? Unfortunately, none of the etchings or bas reliefs explain what the winged human head motif represents. Thus, scholars and archeologists continue to debate whether it represents Divinity (i.e. Ahura Mazda) or Fravahar (Guardian Spirit) or the King’s khvarenah (Khoreh), also called farr (i.e. Divine Kingly Glory).

The theory that this figure represents Ahura Mazda does not seem plausible, as in the Avesta, Ahura Mazda is known as An-aiyafah or Incomprehensible (i.e. understanding the true nature of Ahura Mazda is beyond human comprehension), An-ainah (i.e., Without form) and Mino-tum (i.e., invisible spirit). Even Herodotus wrote: “They (the Achaemenian Persians) have no images of the Gods and consider their use a sign of folly.” 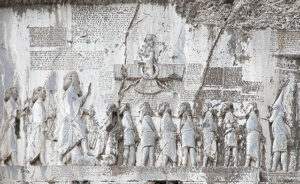 Theologically, while the Urvan (soul) may get corrupted by the choices made, the Fravashi remains pure and incorruptible. Urvan has the choice of seeking the Fravashi’s assistance through quiet reflection or introspection. The term Fravashi comes from Fra (forward) and Vaksh (to grow). In other words Fravashi aids the soul and all creation to move forward and grow.

However, most likely this figure represents khvarenah (in Avesta) or Farr (in Pahlavi or middle Persian). We commonly know it today as Khoreh or (Divine) Glory. Like the Fravashi, Khoreh is also a spiritual companion of the soul. All three components work in concert in the person who thinks, speaks and acts with Ashoi (Truth, purity and righteousness). The scriptures assert that khvarenah is Mazda-datem or Lawfully Given by God to righteous leaders from the time of Shah Hushang of the pre-historic Peshdad (Pesh = first and Dad = Law i.e., first law givers) dynasty. However khvarenah flies away when a righteous leader turns corrupt.

According to Zamyad Yasht (19.34-35): “When he (King Jamsheed) began to find delight in words of falsehood and untruth, the (Kava or Kayani) khvarenah was seen to flee away from him in the shape of a Vareghna bird towards the sun and the great monarch (spiritual and temporal leader) lost his Divine Right to Rule as a Leader.

Zamyad Yasht indicates that kingship and the mantle of leadership of the Aryan people must first be deserved. khvarenah is Mazda-datem or God-given to righteous leaders only. It flies away (wings depict flight) when an Ashwan (Pure, Truthful and Righteous person) get’s corrupted by pride, dishonesty or other vices.

In Conclusion… The winged human-head motif is not originally Persian and nor is it a religious symbol. However, in modern times it has come to acquire religious significance. This motif appears to have been used only by the Achaemenian kings and not kings of other dynasties after them. It appears to have been adapted from similar motifs used earlier by the Egyptians and Assyrians.

Ancient Aryans believed in the concept of ‘Divine Right to Rule’ and what is depicted at Mount Behistun and at Persepolis is probably the Divine Right to Rule, given by Mazda (Mazda-datem) to Darius, Xerxes, Artaxerxes and other Great Kings of Achaemenian Iran.

Hence, if you happen to be wearing the ancient Iranian winged human-head pendant or use it as an artifact at home or at your office, remember that it symbolizes Khoreh and Mazda (Divine Wisdom) may bestow you with real khoreh if you choose to be a truthful, pure (in thought, word and deed), just and righteous leader!