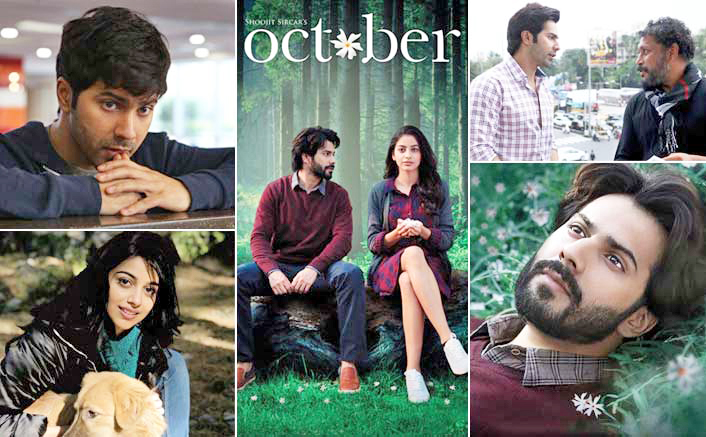 The tagline, ‘This is not a love story, but rather a story about love’ threatens to wear thin after a while; but National award-winning director Shoojit Sircar reuniting (Vicky Donor, Piku) with his favourite  writer Juhi Chaturvedi manages to hold the viewer’s interest.
Varun Dhawan plays 21-year-old Danesh (Dan) Walia, interning in various departments of a 5-star hotel in Delhi. Manjeet, the latter’s girlfriend and Shiuli Iyer (debutante Banita Sandhu) are the ones with whom Dan has a little rapport— they work hard and party harder. Dan’s impish life is impacted when, while at a New Year’s eve employees party, Shiuli meets with a grave accident and slips into a coma.
Varun Dhawan’s portrayal is a far cry from the recent boisterous and gregarious Judwaa 2 character. Here in October — so titled because of the short-lived Jasmine flower which blooms in the beginning of autumn — his performance is measured and restrained, with his curious nature and the witty conversations with the nurse, receptionist and other visitors in the hospital drawing chuckles from the audience.
Though it’s cinema making at its virtual best, the first half seems a wee bit long, even at under two hours. In the second half, Sircar and Chaturvedi play on your emotions as the viewer’s empathy is divided between the bed-ridden Shiuli and Dan, who visits her daily in hospital — to the extent of losing his job in the process.
Avik Mukhopadhyay’s lens covers the spectrum of Delhi brilliantly, while Shantanu Moitra’s background music, so vital in such films, is the perfect foil. It’s one of Dhawan’s finest performances. Though Sandhu’s scenes are few, she is restrained and emotes well with her eyes. Filmmaker Gitanjali Rao, as Shiuli’s mother, who’s quietly appreciative of Dan’s efforts and who develops an unspoken affinity with Dan, is outstanding in her acting debut.
Reportedly made as a result of a small newspaper article, October is a film which moves seamlessly between the hospitality and the hospital industries.