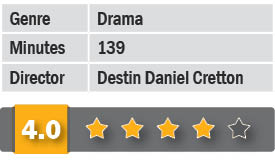 “You’re guilty from the moment you’re born”, is the common refrain of African Americans, especially in the state of Alabama, where racism still persists to a horrifying degree, and where  ‘Just Mercy’ is centered. Based on a true story, and adapted from noted civil rights lawyer Bryan Stevenson’s memoirs ‘Just Mercy: A Story of Justice and Redemption’, it’s about Stevenson (Michael Jordan) who’s fresh out of law school at Harvard and who decides to pursue a calling crusading for those on death row, especially the ones who have received no proper legal defense. Naturally he heads to Alabama, one of the most racist states of US, at least in 1987.

After conversing with a few who are sentenced to death, he zeroes in on Walter MacMillian (Jamie Foxx), known locally as Johnny D. Despite evidence to the contrary, including an alibi, Johnny has been – largely based on evidence supplied by a convict who had reason to lie – accused of killing an 18-year-old white girl and awaiting his turn to the electric chair. Even before his trial began he was sentenced to life, later overturned to death penalty, to appease the influential whites. How Jordan works with the convict’s family and friends and accumulates evidence to acquit Johnny forms the crux of the 139-minute film.

Along the way, writers Destin Daniel Cretton and Andrew Lanham offer a convincing sub-plot – Herbert Richardson (a superb portrayal by Rob Morgan), a former Vietnam veteran, who’s sentenced to death for unknowingly planting a bomb. Richardson’s walk to the electric chair is one of the poignant highlights of the film. “My lawyer, he was there, but he wasn’t there”, says Richardson, betrayed by the legal system. Tim Blake Nelson, as Ralph Meyers who supplies the false testimony, gives more than a decent performance. Award winning actress Brie Larson, as Eva Ansley, with whom Stevenson sets up the Federal funded legal office, has barely any substantial role.

A pleasant (literary) diversion in the film is to twice referenced Alabama being the site where Harper Lee wrote his famous ‘To Kill a Mockingbird’.