Recently, the Zoroastrian Youth Association (ZYA), along with the Poona Zarathoshti Seva Mandal (PZSM) and other donors, arranged for free Navjote ceremonies of four Zarthosti children, at Pune’s Kadmi and Shahensahi Anjuman Daremeher. ZYA’s Farah Khambatta shared with Parsi Times that ZYA plans to organise more such events on a larger scale and on a […] 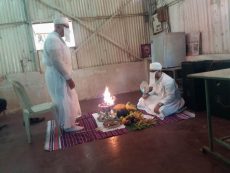 On 16th Febuary, 2019, a Jashan was held in Panthaki Baug, in respect of the death anniversary of Savaksa Panthaki who donated the huge property to BPP for deserving Parsis, for building Panthaki Baug. The jasan was performed by Er. Jimmy Dastoor and Er. Eric Dastoor and was attended by over 30 humdins.