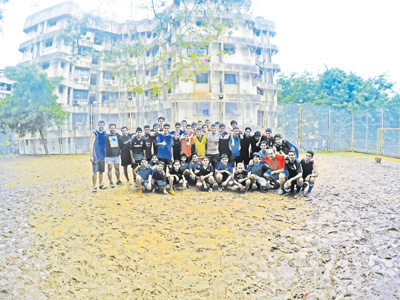 It’s raining tournaments at Salsette! After the mega-successful TT tournament, Team SPY (Salsette Parsi Youth) conducted the Rink Football Tournament on the 25th June, 2016 at the newly available ground of Salsette Parsi Colony. Over forty enthusiasts, between the ages of ten to forty years, fought it out in the slush, amidst the heavy rains which could not dampen the spirit of these youngsters and some of their parents who were present throughout the tournament to keep a watch on their children.Six teams were divided into two groups. The best two teams in each group would qualify for the semi-finals. In Group A, teams led by Jehan Fouzdar and Malcolm Katrak qualified; and in Group B, teams led by Shahzad Daruwala and Afshaan Irani made it to the semi-finals. The exciting semi-finals were fought passionately, with the two best teams qualifying for the finals. Finally, it was Malcolm’s team that clinched the cup with a close score of 2–1. Team SPY thanks the Trustees, parents and the children of the colony and the neighbours who always participate in large numbers and make each tournament a great success!