Yazdi Desai, Chairman, BPP: “This is my fifth address as Chairman of the BPP to our community through the BPP Connect. On behalf of my Board of Trustees, I would like to update you on all that has been worked upon in the past one and a half months. I’m thankful to Parsi Times for extending this platform free of cost.”

In my last address in October 2016, I promised to ensure that the BPP will continue to fulfill our beneficiaries’ needs for Housing without further interruption. Fortunately and most willingly, two of my co-Trustees, Kersi Randeria and Noshir Dadrawalla, share the same resolve (my other co-Trustee Zarir Bhathena is recovering from a surgery). As is now well known, two Trustees – Viraf Mehta and Armaity Tirandaz – have chosen not to sign any more Leave and License Agreements, unless Munchi Cama’s name is included in these. This is not possible as Cama has resigned and it would be illegal to include his name in the L&L Agreements until his case is decided upon by the Charity Commissioner.

This regrettably left 20 beneficiaries, who had been allotted houses, unable to take possession of their flats. However, this Board refuses to be handicapped under any circumstances. Three of us Trustees – Kersi, Noshir and I – have resolved to go ahead and execute and register the L&L Agreements by majority, as provided in the Scheme which governs the running of the BPP.
I’m very happy to inform the community that this week we have managed to complete almost all the pending Leave & License Agreements. It pleases me even further to share that 4 of our 20 allottees, who would have virtually been on the streets by the end of September 2016, have been given possession of their allotted flats on humanitarian grounds, by taking an undertaking from them on stamp paper, as was done in a previous case.

I wish to reassure our community that the majority Trustees – Kersi, Noshir, Zarir and I – will push through every initiative meant for the benefit of the Community, irrespective of the hurdles put in our path by persons with vested interests within or outside the BPP. 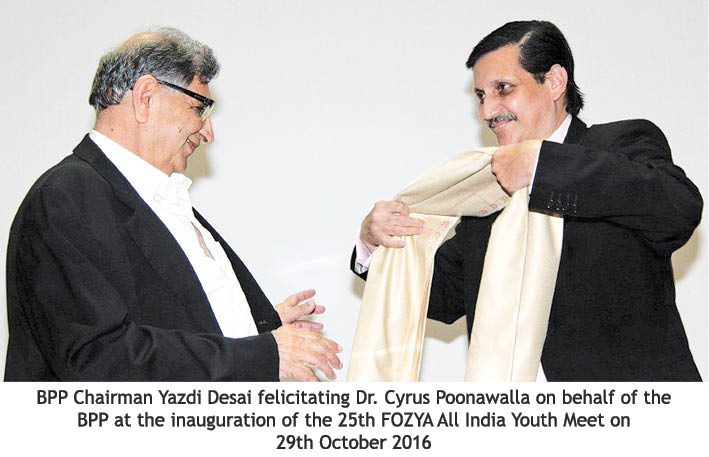 BPP Felicitates Dr. Cyrus Poonawalla:
In the past, we were blessed with sethias who showered the community with their generosity. Our last known sethia, the venerable Jamshed Guzder, passed away a few years ago. However, the vacuum is slowly being filled with the emergence of another benevolent Parsi, Dr. Cyrus Poonawalla, who has put in crores of Rupees over the last few years for the community’s betterment in projects and activities including gambhars, donating towards the boundary wall of Poona’s Doongerwadi complex, supporting the iconic Everlasting Flame Exhibition and related events in Delhi, supporting our mobeds, sponsoring the World Zoroastrian Congress and the Iranshah Udvada Utsav and sponsoring the recent 25th FOZYA All India Youth Meet in Poona. In appreciation and gratitude for all that Dr. Cyrus Poonawalla and his son Adar, have contributed towards our community, the BPP felicitated him in Poona at the inauguration of the 25th FOZYA All India Youth Meet on 29th October, 2016.

The 41E Application filed by Munchi Cama asking the Jt. Charity Commissioner to restrain the BPP Board from carrying out any work of the Trust unless he is recognized as a Trustee, continues to be heard at the Charity Commissioner’s Office. Trustees Viraf Mehta and Armaity Tirandaz are supporting Munchi Cama’s Application and have stated in their affidavit filed in October that the Charity Commissioner should restrain the Board from “taking any step or policy decision in respect of the properties of the Punchayet”. In their Affidavit they have stated that all the reliefs demanded by Munchi Cama should be granted – in short, they are supporting Cama’s demand to bring the BPP to a grinding halt! Kersi Randeria, Noshir Dadrawalla, Zarir Bhathena and I are fighting this Application at the Charity Commissioner’s. Kersi is representing himself and we (Noshir, Zarir and I) are represented by lawyers. We reassure the community that we are doing and will continue to do everything in our power to ensure that Cama, Viraf and Armaity do not succeed in bringing the BPP’s activities to a halt, thereby hurting the interests of the community and violating the very essence of service to the community that the BPP was instituted for.

Munchi Cama’s Change Report: Dinshaw Mehta, and much later, Cama, are opposing the Change Report filed by me on behalf of the BPP, to record Munchi Cama’s resignation. As the Reporting Trustee I’m being cross examined. 4 hearings of the cross-examinations have been completed, and it seems that for another 2-3 hearings, my cross examination will continue. Thereafter witnesses from our side will be cross examined. Our Board is determined to see this matter through.

The Originating Summons filed by Munchi Cama in the High Court: In this case too, Munchi Cama has prayed to the Board for stoppage of all work in the BPP. This was not granted by the H’ble Court. Directions were however given to expedite the above 2 cases pending with the Charity Commissioner. Again, Viraf Mehta and Armaity Tirandaz are supporting Cama to stop all BPP work.

Parsi Lying in Hospital (PLIH) Case: In the Appeal filed by Dinshaw Mehta in the Supreme Court, the matter came up for hearing on the 22nd November, 2016, but Dinshaw Mehta sought an adjournment and the case has been adjourned to 6th December, 2016.

The staff of Parakh Dharamshala was putting in manipulated claims for overtime, averaging nearly Rs. 50,000/- every month. The BPP availed the assistance of HR Consultant, Zareer Jehangirji to get a professional assessment of the staff requirement at Parakh Dharamshala. Zareer pointed out that Parakh Dharamshala was considerably overstaffed and therefore the claims of overtime were totally unjustified. The BPP CEO, Cawas Panthaki, with the support of the President of the Ladies Committee of Parakh Dharamshala, Arnavaz Mistry, took a firm stand on overtime payments and have worked out a system of adjustable comp-offs (compensatory holidays) whenever Overtime work is unavoidable (national festivals, Bank Holidays). As a result, there is no overtime payment and the BPP has helped save at least Rs. 6 lakhs per annum. It is my humble request to some of my Trustees to support such cost saving endeavours.

Beyond Housing…. BPP Steps In:

Being the apex body of the Parsi/Irani Community, BPP has reached out to help community members whenever called upon to do so –

In 2011, there was an uproar in the community when a Parsi girl child in Vasai died supposedly due to malnutrition. The father was a khandia who had left his job and abandoned his wife and 3 children. The non-Parsi wife was left to fend for her three small children. The BPP at that time had arranged for the son to be admitted to the Petit School at Poona and the mother and daughter were helped monetarily to get back on their feet. Unfortunately both mother and daughter were afflicted by AIDS. The daughter expired and just a couple of months ago the mother also expired, leaving the son studying in Petit School without any family or support. He is understandably traumatised, having lost his entire family and it is the BPP who has stepped in, taking guardianship of the boy with the help of a wonderful Parsi couple, Daisy and Dinyar Shroff of Vasai, who have stepped in to help the BPP in looking after this young boy. The son has technically become the BPP’s child.

Silver Lining:
Since the last two decades, the BPP has been plagued by the issue of the DP Road (Development Project Road) that was dividing Panthaky Baug Colony right down the middle. To add to this issue, the latest DP plan had shown that the entire open plot in Panthaky Baug was to be acquired by the BMC and made into a public garden.

However, the new Board put in great effort to save this plot. The four of us – Trustees Zarir Bhathena, Noshir Dadrawala, Kersi Randeria and I – spared no effort to get this renovation cancelled. With Kersi Randeria constantly at the helm of this issue, a delegation of Trustees first met with Shri Ramakant Jha to appeal for this cancellation. Next, the Board approached the Municipal Commissioner, Ajoy Mehta with this request. Both gentlemen assured the Trustees of looking into the matter and helping the Parsi community preserve the property. However, the final DP plan still reflected the reservation and therefore the Trustees yet again met the Review Committee Panel on Thursday 24th November, 2016 and finally succeeded in convincing the authorities to protect our property. The reservation has been removed and the DP road is now realigned in a manner which will cause least disturbance. The BPP was assisted in this project by architect S P Shevade, BPP CEO Cawas Panthaky and Project Head, Rustom Todiwala.