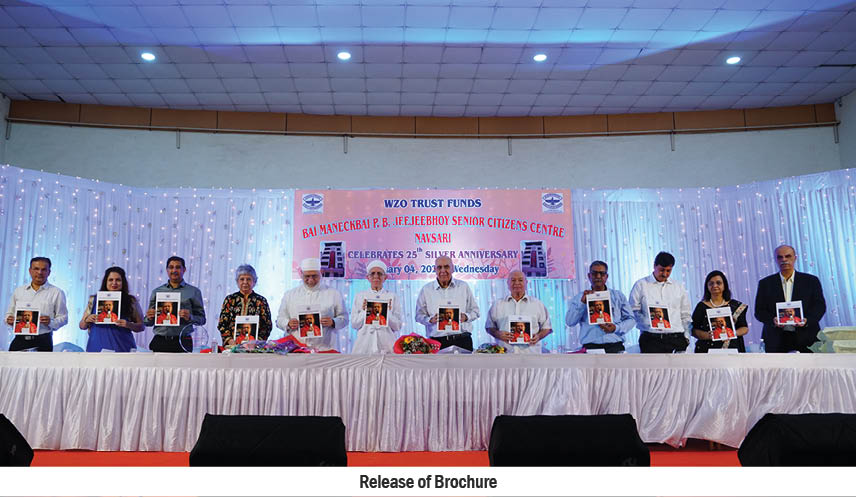 In a discussion with Bachi and Dinshaw Tamboly, the late philanthropist Scylla Vatcha, put forth the idea for creating a senior citizens’ centre for community members who were mobile and able to look after themselves, but didn’t have a place to stay or a support network. The discussion culminated in Bai Maneckbai P.B. Jeejeebhoy Senior Citizens’ Centre becoming a reality 25 years ago, in Navsari (Gujarat). The property chosen for the home was in a predominantly Parsi area and near an Agiyary, with easy access to the marketplace.

It soon tied-up with the Abuwalla Parsi Infirmary, run by the Navsari Samast Anjuman, for residents who may at some stage become bed ridden requiring medical care, that the Centre would be unable to be provide. The total expenses for creating and furnishing this facility at the Abuwalla Parsi Infirmary was also borne by Mrs. Scylla Vatcha through Bai Maneckbai P. B. Jeejeebhoy Deed of Settlement Fund.

Today the Centre, at full capacity, can accommodate 52 residents. Based on the financial condition of the residents, some pay a nominal amount (max Rs. 6,000/- per month) and others stay gratis. Daily, the centre helps visit the living quarters of residents, wash their clothes, dust their rooms, make their beds and clean up. The hallways are kept clean and sanitized. Residents eat homemade meals prepared fresh daily in the centre’s kitchen, which provides tea, breakfast, lunch, dinner and a spread of Parsi dishes the residents can enjoy. Special requests are entertained, and the resident even gets to choose the day’s menu on his/her birthday! Residents are provided games and entertainment in the common room, like carrom and cards, or watching television. They even have access to yoga, physiotherapy and the occasional outing organised by the staff.

On 4th January, 2023 the Bai Maneckbai P.B. JeeJeebhoy Senior Citizen’s Centre celebrated its glorious 25th year of service to the elderly of our community. The morning began with a Jashan led by Vada Dasturji Keki Ravji MeherjiRana and ten Mobeds, followed by a Humbandagi. Vada Dasturji then praised Dinshaw and Bachi Tamboly for their hard work, dedication and commitment to our community members. The morning concluded with a cake-cutting led by active and agile residents – Freny Mistry (97), Marzban Karkaria (86) and Lily Mevadwala (85).

The evening celebrations continued on the ground adjacent to the Navsari Boys Orphanage, where residents, staff, trustees and well-wishers gathered in large numbers. It commenced with a prayer by Vada Dasturji Keki Ravji Meherji Rana and an address sharing with the audience, his own uncle’s experience living at the centre and describing his stay as ‘heavenly’. Vada Dasturji of Iranshah Udvada – Khurshed Dastoor also addressed the audience, speaking highly of Mr. Tamboly as his friend and mentor, and praising the Tamboly couple for their selfless service, goodness and kindness. He likened their work and kindness as the true Zoroastrian way of life and teachings.

A number of people were felicitated for their various contributions to the growth and functioning of the Senior Citizens’ Centre over the last 25 years, including Jayant Mehta – architect of the center and 18 buildings commissioned by WZO Trust Funds in Navsari; Yazdi Kasad – builder, having constructed most of these buildings; Sharmin Tamboly – Administrator, Homi Mistry – Manager, representing the Navsari staff; former Manager Soli Vandrevala for 23 years of service at the Centre; Dr. Zubin Saklat – attending to medical needs of the center’s residents; Dr. Shivani Joshi – physiotherapist; and Simin Bharda – for yoga sessions. 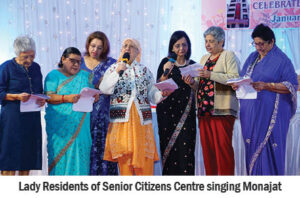 Resource persons of the Trusts who carry out due diligence on appeals received for consideration were also felicitated – namely Maharukh Chichgar (Surat); Jehangir Bisney (Hyderabad – in absentia) and Viraf Deboo (Pune – in absentia).

The felicitations were followed by both – the Vada Dasturjis releasing a special brochure created to mark the 25th Anniversary of the Senior Citizens’ Centre.  A special video was also released and screened. The formal part of the evening comprised much jubilance with old Hindi songs sung by Shahzad Karanjia and Delnaz. Yazdi Karanjia, Maharukh Chichgar and their team also entertained the audience with some hilarious comedy.

The glorious evening concluded with the rendition of ‘Chaiye Hame Zarathushti’ and the National Anthem, followed by a delicious meal served by WZOTF beneficiary, Soonu Kasad.

View all posts by By Freyaz Shroff →