Jehan Daruvala earned his sixth podium of the season at Spa, Belgium, moving up into a clear second position, in the FIA Formula 3 championship in Round 6. Jehan’s sensational pole position earlier, his first in the series, is a support event to the Formula 1 Belgian Grand Prix. Jehan started well from pole and […] 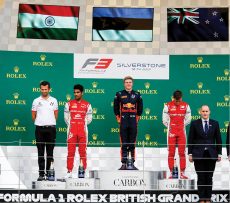