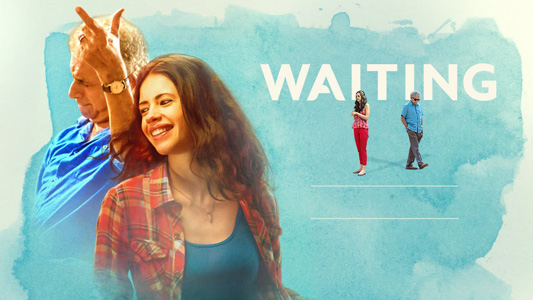 Shorn of the usual trappings of Hindi cinema – tear–jerker dialogues and outlandish performances – ‘Waiting’ (largely in English), alluding to the time spent in waiting-rooms of hospitals and the periods consumed waiting for the recovery of your loved ones, has a refreshingly rational take on the above.

Shiv Kumar (Naseeruddin Shah) is a retired professor in Kochi, whose 40-year marriage has dithered his wife Pankaja (Suhasini Maniratnam) is in a coma for the past eight months. He spends his time brushing up on medical knowledge, arguing with the doctor-in-charge (Rajat Kapoor), being pleasantly courteous to the nurses and staff and spending time in the Kochi hospital’s cafeteria. Here he encounters Tara Deshpande (Kalki Koechlin) who’s flown in from Mumbai, at the news of her husband – Rajat (Arjun Mathur) who has suffered a serious brain injury as a result of a car accident.

Anu Menon grippingly depicts the entire gamete of emotions of the two and contrasting shades of the philosophy of an older man trying to understand a brash younger woman whose six-week old athletic husband, even if he recovers, may not even walk again.

Tara, who’s shown cockily shooting for a sanitary-napkin ad, is liberal with the ‘f’ word and thinks all men and doctors are a***s’. On the other hand, the professor thinks that all doctors are puppets in the hands of insurance companies and expounds his doctrine on the looking-after and caring for a loved one – denial, anger, hope, depression and finally acceptance.

The director manages to include enough comic elements in a film of this nature. Veteran Naseeruddin Shah breezes through the role while Kalki comes into her own in the second half of the film. The sub-titles, though, could have been better written, with Kochi and Cochin used interchangeably.